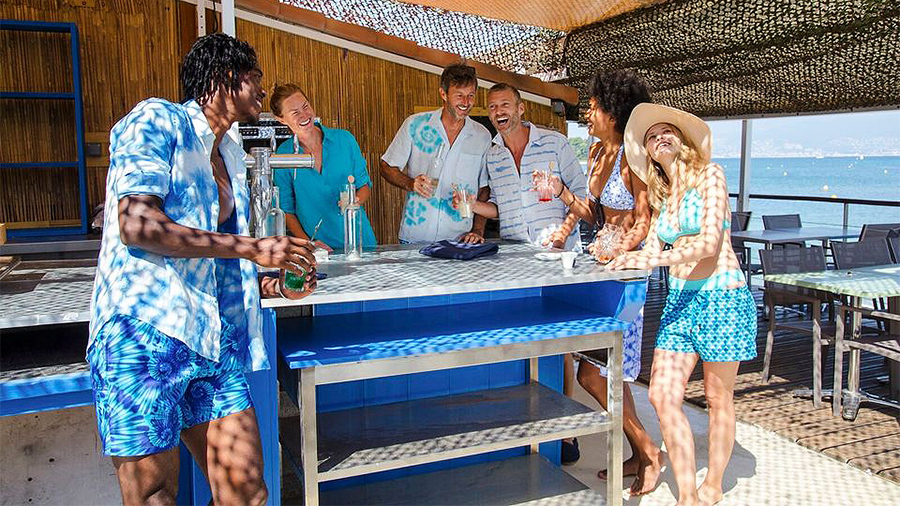 G-III Apparel said it’s still finding growth from its casual categories, including jeans and athleisure, but a pivot toward dressier offerings drove its above-plan first quarter.

Morris Goldfarb, G-III chairman and CEO, told analysts, “As people return to work, resume socializing and life continues to return to normal, customers are shopping to refresh their wardrobes, and demand for our product remains strong.”

Goldfarb said, “Given the positioning of our brands in better department stores, our business is much less impacted by the recent inflationary pressures. In particular, our status brands Vilebrequin and Karl Lagerfeld are even further insulated on pace with the overall luxury market.”

In the quarter ended April 30, sales increased 32.5 percent to $688.8 million year-over-year, well above guidance calling for sales of approximately $600.0 million. Net sales were roughly 9 percent above pre-pandemic levels in the first quarter of 2019.

On an adjusted basis, non-GAAP EPS rose 28.6 percent to 72 cents from 56 cents in the same period last year. Results handily topped guidance in the range of 50 cents to 60 cents a share.

Adjusted results in the latest quarter exclude one-time expenses tied to its recently-announced acquisition of Karl Lagerfeld and interest expense linked to a note issued to the seller as part of the consideration for the purchase of Donna Karan International.

G-III absorbed larger than usual other expenses, mainly attributable to foreign currency translation losses, primarily associated with the dollar’s strength. A large portion of these charges is related to the Lagerfeld acquisition.

Wholesale Sales Climb 33 Percent
Net sales of the wholesale operations segment increased approximately 33 percent to $681 million from $512 million last year and were up 19 percent compared to pre-pandemic net sales of $571 million in the first quarter of the fiscal year 2020.

“This was another strong quarter for our wholesale business, registering growth across the board that once again outpaced our expectations,” said Goldfarb.

He said wholesale sales benefited from adjustments and changes in behavior around the pandemic. Goldfarb added, “When the pandemic hit, we quickly focused on driving our casual divisions including jeans, athleisure, casual sportswear, and footwear, growing them significantly over pre-pandemic fiscal 2020 levels. These businesses continue to perform well, with sales slightly up compared to last year. We’ve once again rebalanced our mix in anticipation of people resuming social activities.”

With sales up overall across all divisions, G-III’s penetration of casual pandemic categories decreased, and production shifted into “more polished” offerings, including dresses and career wear.

Said Goldfarb, “These post-pandemic categories are now seeing a strong acceleration in sales up over 35 percent last year with AURs increasing over 25 percent. Additionally, we shifted our production calendars to bring in inventory earlier and are well-positioned to capture this robust demand.”

“For the fall 2022 season, we are prepared with inventory, have strong orders in a high-single-digit lift in average AURs,” said Goldfarb. “This was a particularly good quarter for our growing handbag business for Calvin Klein, DKNY, and Karl Lagerfeld Paris. And newly launched Karl Lagerfeld handbags have gained substantial scale and doubled in distribution from last year, now available in approximately 450 doors in North America. We had strength in dressier footwear and fashion sneakers for DKNY and Karl Lagerfeld Paris, which is driving increases in AURs.”

G-III also continues to benefit from past accelerated investment in digital and its omnichannel strategy. Compared to pre-pandemic levels, digital sales across its brands are up approximately 60 percent.

G-III is also finding growth with its wholesale partners on third-party sites.

“We have a strong omnichannel business with our retail partners,” Goldfarb stated. “Our brands hold a significant presence on their growing websites and occupy some of the most desirable real estate in their stores. We’re capturing market share as consumers increasingly return to stores for categories such as dresses and career wear. Our ability to deliver across channels continues to elevate our position as a vendor of choice to our retail partners,” he continued.

Inventories at the quarter’s close were up approximately 59 percent compared to last year due to the pulled-up production calendar in anticipation of supply chain challenges. This increase is predominantly driven by in-transit inventory, which makes up approximately 60 percent of the increase. Last year’s inventory levels were also unusually low. As compared to pre-COVID wholesale inventory levels in the first quarter of fiscal 2020, inventories were up 26 percent.

On the call, Neal Nackman, CFO, said, “Considering the pull-up of our production calendar, we feel very good about our inventory position and composition.”