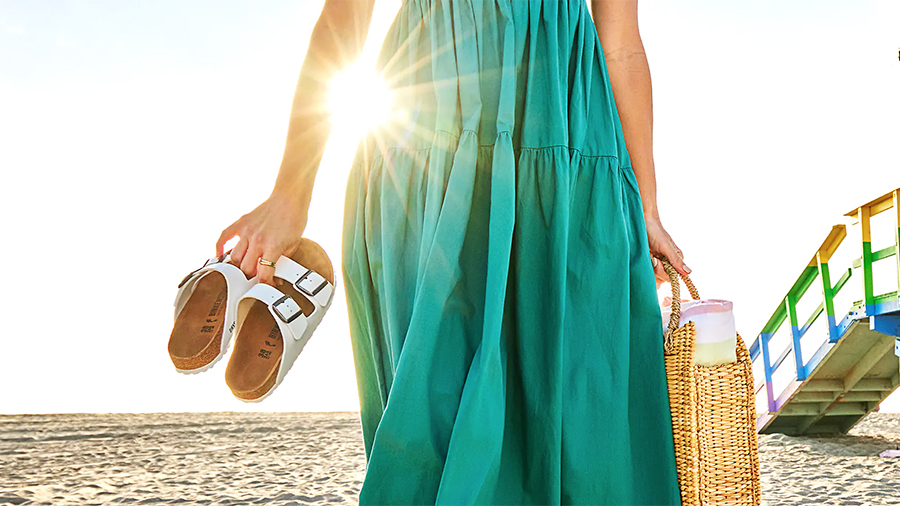 Shares of Caleres, Inc. rose nearly 30 percent Wednesday after the off-price footwear chain reported first-quarter results that came in well above Wall Street estimates and raised its guidance for the year.

“We view our first quarter performance as a further proof point of the step change that we’ve achieved in the long-term cash generation potential of Caleres,” said Sullivan. “As a result of the smart investments made and the enterprise-wide strategies deployed, we believe we have effectively doubled our normalized mid-cycle earnings to something approximating $4 a share.”

Gross margin improved 144 basis points to 44.5 percent or a 144-basis point improvement over the first quarter of 2021 due to a favorable sales mix and a less promotional retail environment. Price increases helped offset ocean freight costs that began climbing during the second half of last year.

SG&A as a percent of sales was 35.5 percent, 266-basis points higher year over year due primarily to an increase in variable costs on increased sales, an increase in marketing costs and higher wages and labor costs.

Famous Footwear’s Q1 Margins Expand 405 Basis Points
Among its two segments, Famous’ sales fell 3.4 percent to $384.5 million against a record year-ago quarter. The decline reflects a slightly lower store count and the easing of the pandemic that spurred a burst in pent-up demand in the 2020 quarter. Operating earnings at Famous improved 3.8 percent to a record $49.7 million.

Diane Sullivan, chairman and CEO, said, “Notably, Famous maintained its focus on full-price selling, which enables us to sustain our strong gross margin level, achieving a gross margin rate of over 49 percent during the period.”

Gross margins jumped 405 basis points increase over the first quarter of 2021, marking the fifth straight quarter of year-over-year margin improvement. The improvement reflects the continuation of more full-price selling and another quarter of minimal promotional activity.

“While we are still experiencing delayed receipts due to supply chain disruptions, we believe our ability to continue full-price selling and our disciplined approach to inventory buys will enable Famous to sustain a margin level higher than our historical averages,” said Sullivan.

Beyond greater full-price selling, Sullivan said Famous benefited from strong demand for the chain’s differentiated assortment of brands, coupled with a targeted marketing approach, planning and allocation expertise, and its localized approach. Said Sullivan, “In short, the strong financial and operating performance, including the approximately 13 percent return on sales, demonstrates the power of the Famous brand and paves the way for another strong earnings year.”

Famous Footwear Update
Providing an update on Famous’ strategies, Sullivan said that on product, Famous continues to focus on being known for carrying “the most sought-after brands,” with top brands representing a “key driver” of the quarter’s financial performance for Famous.

She called out the expected continued benefit this year of Famous’ focus on active lifestyle footwear. She said, “As we progress throughout the year, we will continue to leverage our leadership position in athletic and sport and build upon our strong relationships with all key brand partners.”

Famous also continues to look to capitalize on Caleres’ owned brands that offer opportunities for higher margins for the company as a whole, according to Sullivan. Of Caleres’ owned brands, LifeStride, Scholl’s and Blowfish were all in the top-10 best-selling brands at Famous during the quarter.

Finally, she said Famous has benefited from stronger demand for seasonal and occasional-based products as consumers socialize more at this stage of the pandemic.

“This provides a compelling opportunity for us to leverage our fashion-focused brands in our portfolio to drive highly profitable incremental sales,” said Sullivan. “We know that when she buys for her family and for herself, she is spending more, connecting more and returning more often. So adding the right styles in the right locations will broaden our business and provide value on top of our core athletic and sport business going forward.”

On marketing, Sullivan said Famous has identified opportunities to shift a portion of marketing spend to digital this year to help offset the decline in year-over-year promotional activity, which impacts Famous’ digital business more significantly.

Said Sullivan, “It’s important to remember that the competitive landscape has shifted with the expectation that we will see another year of limited promotional activity. As a result, it’s critical that we employ a more tactical approach to connect and engage with consumers. And to that end, we’re being surgical in our marketing tactics using targeting and personalization in order to drive repeat purchases and working to shift traditional one-channel shoppers to omnichannel consumers.”

She said a back-to-school campaign is being planned that depicts a “tangible modern image” of Famous based on analytics mined from the chain’s customer file as well as early reads from its new store prototype and store refreshes.

Sullivan said Famous’ store prototype and refreshes are seeing encouraging customer responses. Sullivan said, “While it’s still early, we’re already seeing positive trends from the first prototype and in stores that have completed their refreshes. We’re optimistic that these efforts will reinforce our national presence, further our differentiation and generate solid returns.”

Sullivan said momentum continued for the Brand Portfolio segment following the strong rebound seen in the second half of 2021.

“Consumer demand, particularly for dress occasion and wear-to-work products accelerated during the period and as key retail partners rebuilt their inventory position,” said Sullivan. “It’s important to note this wholesale partner post-pandemic restock likely moderate as we move through the year as they return to more normal buying and replenishment patterns.”

The gains were driven by double-digit improvements from each brand across the portfolio, with a couple of brands recording triple-digit increases. Sullivan added that Caleres is “capitalizing on the continued demand for casual and sport-inspired styles as well.”

Among brands, Naturalizer’s sales “increased significantly over the first quarter of 2021 with a solid increase over 2019 as well” with more consumers are seeking occasion-based styles. Sam Edelman had “another great quarter,” benefiting from strong demand for dress products. Sam & Libby made its debut at Walmart earlier this spring to an “overwhelmingly positive reaction.” LifeStride sales more than doubled.

Allen Edmonds saw strong improvements in both digital and brick-and-mortar sales, higher average-unit-retailers (AURs) and an approximately 600 basis point increase in gross margin. Said Sullivan, “Interestingly, demand for dress shoes and sneakers continued into 2022 with the sport category growing to our second-largest classification.”

Outlook Raised
Inventory levels at the quarter’s end were up approximately 45 percent year-over-year reflecting “unusually low” inventory levels a year ago, said Ken Hannah, SVP and CFO, on the call.  Inventories were flat to the first quarter of 2019.

Said Hannah, “The increase included a 16 percent increase at Famous Footwear and a 99 percent increase for the Brand Portfolio. Famous Footwear inventory was 13 percent below 2019 levels, while the Brand Portfolio was 15 percent higher than our 2019 levels, including approximately $100 million of in-transit inventory not yet available to sell. The quarterly in-transit inventory level was down from $177 million at fiscal year-end 2021.”

Given a strong start to the year and healthy demand going forward, Caleres raised its fiscal-year 2022 financial outlook. The company now expects: