Eurobike Makes Its Move To July 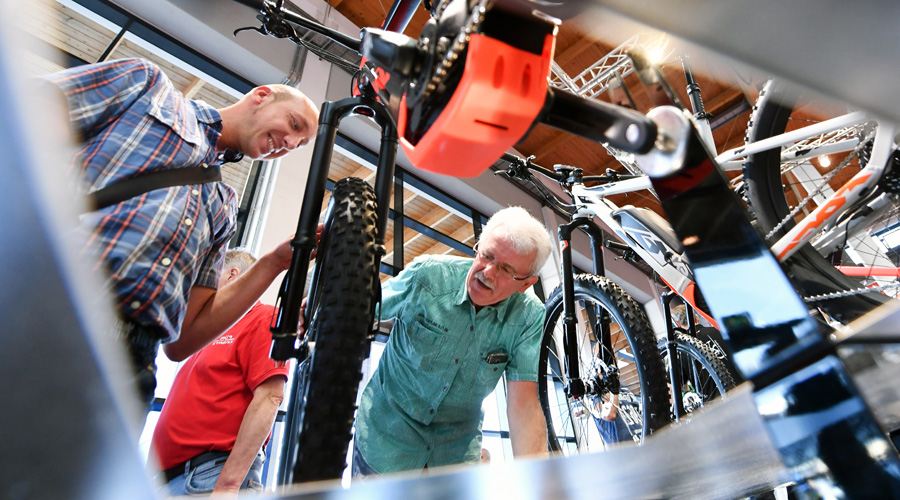 Messe Friedrichshafen on October 13 announced plans to move Europe’s largest trade show for independent bicycle dealers (IBDs) up a full month in 2018 in a bid to even the playing field for its exhibitors.

Eurobike 2018 will kick off on Sunday, July 8, compared with Wednesday, August 30 for EuroBike 2017, which will run through Friday and then open for a one-day consumer show on Saturday, September 2. Messe Friedrichshafen has yet to decide whether the show will run for three or four days.

“Numerous conversations with manufacturers, including both exhibitors and non-exhibitors, retailers and the media have made it increasingly clear that further fragmentation of the industry into separate in-house exhibitions and order shows is neither long-term, nor sustainable,” said Eurobike Head Stefan Reisinger.

The earlier date will put Eurobike exhibitors on a more even footing with brands that have withdrawn from the show to conduct earlier in-house events that give them a first shot at dealers’ open-to-buy budgets for the upcoming year. This left Eurobike’s remaining exhibitors competing for a diminishing pool of business.

“September is too late for our business timetable,” said Claudio Marra, managing director for the component manufacturer Full Speed Ahead, which will exhibit at Eurobike 2018. “New bikes and components are already available or have been covered by other events and media. As a result, we miss out on the original nature of Eurobike, to present new product innovations. We are a big fan of the new changes and are only too happy to support them.”

Shimano’s German distributor is among more than 20 companies that pledged October 13 to exhibit at Eurobike 2018. Paul Lange & Co. Managing Director Bernhard Lange said that despite a disturbing decline in trade visitors, Eurobike is needed more than ever.

“We feel that the greatest potential for the medium and long term lies not in today’s bike-conscious circles, who can probably be reached by smaller events,” said Lange, whose Stuttgart-based company distributes bicycles, parts and accessories in eight European countries. “The real potential lies in broader sections of society. We have to win them over to bicycles, whether they are politicians, journalists or other groups. What could be better to achieve this, than having a central, international forum such as Eurobike?”

Companies that own or distribute Electra, Ghost, Marin, Scott and Winora bikes have also pledged to exhibit at Eurobike 2018, as have component makers Bosch eBike Systems, Shimano Europe B.V. and SRAM.

Germany’s bicycle trade association Verband des Deutschen Zweiradhandels (VDZ) also threw its support behind the new dates. “There seems to be an unending flow of trade shows for retailers,” VDZ Chairman Dietmar Knust and Executive Board Member Tobias Hempelmann said in a joint statement. “From July through to September, retailers can literally spend the entire time traveling the length and breadth of Germany, visiting dozens of these in-house shows which are generally more like events. Few retailers have the time – let alone the personnel – to do this during the season.

“The large number of in-house shows and Eurobike absentees is damaging the industry as a whole,” they continued. “Other industries are only too envious of our central, major trade show. This is why the VDZ is unequivocally in favor of bringing together the industry’s forces at the Eurobike.”

The remarks echo an ongoing conversation in the United States where Outdoor Industry Association, Emerald Expositions and Snowsports Industries America are mulling schedule changes. Interbike, which is also produced by Emerald Expositions, is facing increasing competition from in-house events held by Specialized Bicycle Components, Trek Bicycle Corp. and Giant USA. The companies, which account for eight in every 10 bicycles sold through IBDs by some estimates, no longer exhibit at the Interbike main show in Las Vegas.

To underline its commitment to regaining status as the industry’s premier trade event in Europe, Eurobike will also eliminate a consumer event it extended from one to two days this year.

“Eurobike should be the main event where all relevant brands first present their innovations to industry, retail and media representatives,” said Messe Friedrichshafen CEO Klaus Wellmann. “As a result, Eurobike will have an exclusively B2B focus, so there will be no addressing end consumers from 2018.”

Meanwhile, back in the U.S., Interbike will experiment with its own hybrid business-and-consumer event on the East Coast later this month called Fall Cyclofest as an offshoot to its main event.