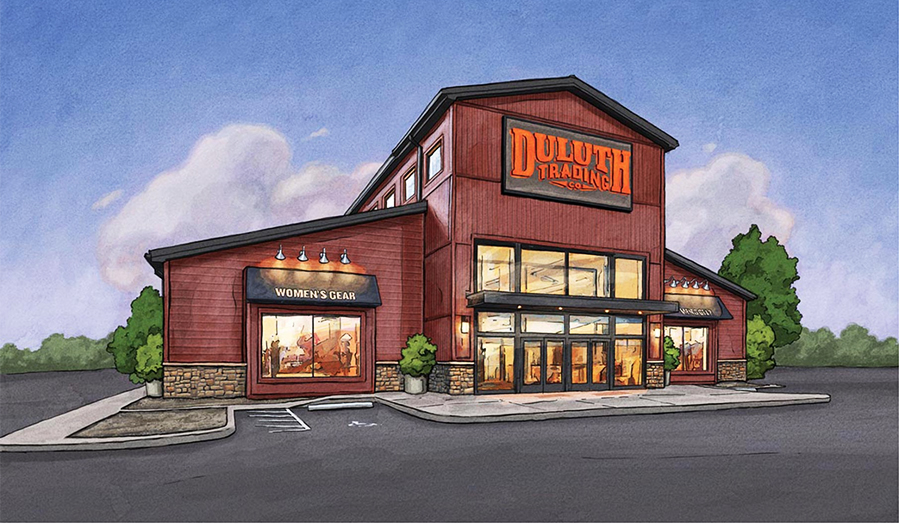 Duluth Holdings Inc., the parent of Duluth Trading, plans to reduce new store openings and take other measures that will curtail expenses and capital spending in 2020 to weather the expected fallout from the coronavirus outbreak.

“Our plans for fiscal 2020 made just a few weeks ago are already out of date and under review,” said Stephen Schlecht, executive chairman and CEO, on the company’s fourth-quarter conference call with analysts.

He noted that eight of the company’s 61 stores have closed with those locations primarily located in densely populated areas in the Northeast. More temporary closures are being considered as well as other cost-management moves.

The CEO said, “Our response to all this uncertainty is to take a very conservative approach to our business across all categories of spending. We’re reviewing the store opening plans and have already made adjustments.”

Schlecht added that while Duluth is positioned well with over 50 percent of sales coming from online, “we know that many customers are experiencing financial uncertainty that could have a significant impact on direct channel sales.”

On the positive side, Schlecht said the company has “emerged stronger” from challenging times in the past in its 25-year history and expects a similar result with the current crisis.

Said Schlecht, “I think our resilience rests on our foundational three brand pillars, solution-based products manufactured with high-quality craftsmanship, humorous and distinctive marketing and an outstanding customer experience. We have created a lifestyle brand that speaks directly to the modern self-relying American who will always prevail regardless of challenging times.”

Recent initiatives to support long-term growth will continue, including a focus on improving the productivity of existing stores. Store initiatives include the steady flow of newness and product and visual feel, supported by targeted and localized promotions to drive traffic and regional assortment of product that’s locally appropriate.

Schlecht added that while the company first announced plans to moderate its store expansion pace in the second quarter of 2019, stores remain critical to driving growth and attracting new customers. While overall new customer growth was up 20 percent in 2019, approximately 40 percent came from its retail stores. Said Schlecht, “Even with these benefits, we know that store productivity needs to show improvement. Frankly, it’s been a steep learning curve that initially we did not anticipate. So we’re getting smarter, and we now have more technology-enabled tools to work with.”

Schlecht said the improvement came despite a number of headwinds, including the shortest holiday selling season since 2002 that “triggered some of the earliest and heaviest discounting that we’ve seen in quite some time.” Another hurdle was the arrival of some of the warmest weather on record in several parts of the country over the holiday period.

In the quarter ended February 2, net sales increased 3.6 percent to $259.6 million. The inclusion of the 53rd week in fiscal 2018 amounted to an additional $7.7 million of net sales.

The gain was driven by an 11.6 percent growth in retail sales, partially offset by a 0.6 percent decline in direct sales. The increase in retail sales was attributed to the opening of 15 stores during 2019, partially offset by a decline in existing store sales. Direct sales growth in established markets with a store continued to outpace markets without a store.

Women’s sales jumped 9.2 percent driven by fall and winter gear and the expansion of the women’s plus line. Men’s sales increased 2.1 percent driven by new products and growth in Alaskan Hardgear, partially offset by lower outerwear sales due to unseasonably warm weather in many parts of the country.

Gross margin increased to 52.8 percent from 52.4 percent in the prior-year fourth quarter. The increase in the gross margin rate was primarily due to leverage gained from higher retail sales partially offset by global promotions and clearance activity throughout the quarter.

SG&A expenses increased 2.7 percent to $103.9 million, and eased slightly as a percent of sales to 40.0 percent, compared to 40.4 percent in the corresponding prior-year period.

The increase in SG&A expenses was primarily due to increased occupancy, equipment and personnel costs to support the growth in the number of stores and increased demand during the peak season. The sales leverage further benefited from reduced catalog spend, improved shipping rates and efficiencies gained at its distribution centers and call center. The new distribution center in Dubuque, IA allowed the company to lessen its reliance on costly third-party logistics companies during the peak season. The company also benefited from further omnichannel momentum with 10.7 percent of direct orders fulfilled and shipped directly from a retail store.

Operating income in the quarter increased 10.1 percent to $33.1 million and adjusted EBITDA advanced 13.7 percent to $39.9 million

For the year, the company opened 15 retail stores to end with a total of 61.

Dave Loretta, SVP and CFO, said the company has five new stores planned in 2020, including four with signed leases, that will continue but the company is holding off any additional locations. Certain technology and infrastructure projects will also be deferred.

Loretta said, “We are scrutinizing our marketing programs and other discretionary spend to preserve dry powder. To help support liquidity, there is extending capacity in our bank line of credit that is available if needed. All told, we are taking action to respond to this dynamic business environment and are confident we can manage through this difficult time.”

Loretta added that of this week, traffic to stores has slowed “significantly” while demand through its online channels year-to-date have generally been up from last year other than the days that Duluth faced last year’s 60 percent-off clearance event. Loretta said, “That said, if consumer spending over the coming weeks and months show significant weakness, we do expect the impacts will materially affect our sales. As such, we are suspending financial guidance and hope to provide updates on our next earnings call.”