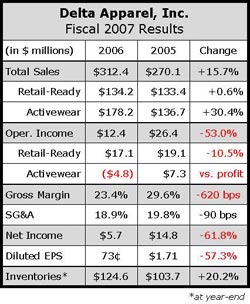 ended its fiscal year with promising positive movement on the sales line, but net income failed to follow the trend as restructuring costs, split between one-time fees and increases to cost of sales, forced the company to take a hit to the bottom line.

Fiscal fourth quarter net sales increased 11.3% to $91.8 million from $82.5 million last year.  Sales growth came from the addition of the FunTees business to the Activewear segment and strong growth in the Junkfood businesses in the Retail-Ready segment.

The Retail-Ready division reported an organic sales increase of 7.1% to $43.3 million, driven primarily by sales in the Junkfood business, which grew 40.2% to $9.1 million for the quarter.  Segment operating income was $8.6 million for the three months ended June 30, compared to $8.7 million in the prior year period.  For the full year, Soffe sales were up 7.3% as the Cheer short business grew 10%.

The Activewear segment benefited from the inclusion of FunTees, which drove a 15.4% jump in Q4 sales to $48.5 million. The FunTees gain was slightly offset by “lower sales in the Delta catalog products.” On a conference call with analysts, management said that sales at FunTees were $55.6 million for the nine months the company owned the business.  For the full year, sales in the Delta business decreased 10.2% to $122.7 million.  The division incurred restructuring-related expenses totaling $6.9 million in Q4.  This expense, along with higher priced raw materials, drove a segment operating loss of $7.5 million during the fourth quarter, compared to income of $2.1 million in the prior year quarter.

Overall gross margins decreased 810 basis points to 20.6% of sales in Q4, compared to 28.7% of sales in Q4 last year, largely due to the $5.4 million in restructuring-related charges. The margin decrease combined with an increase in expenses to cause the companys net income to drop to $700,000 in the fourth quarter, or 8 cents per diluted share, from $6.3 million, or 73 cents per diluted share, last year. The company's fourth quarter 2007 diluted earnings per share results include a restructuring-related charge of 51 cents per share.

For the 2008 fiscal year, the company expects net sales to be in the range of $335 to $350 million and diluted earnings per share to be in the range of $1.36 to $1.52, including the $3.2 million, or 23 cents per diluted share, of anticipated expenses associated with the start-up of the companys new Honduran textile facility and the shutdown of the Fayette, Ala. facility that will impact results in the first two quarters of fiscal 2008. 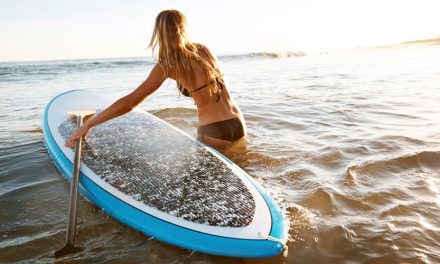