The company saw sales growth during the quarter in all but one of its business units, although total net sales were affected by the sale of The Game college bookstore business and the associated removal of that revenue stream in the quarter. Adjusting for that transaction, total net sales for the quarter increased by approximately 2 percent.

Net sales for the company's basics segment were $71.4 million in the 2015 second quarter, an 8 percent increase over the $66.1 million in the prior year's second quarter. The gain was driven by a 28.5 percent increase in private label sales, which was partially offset by a minor decline in the catalog business. The company has increased its sales force dedicated to undecorated tees to gain additional strength in underserved areas of the country, and continues to expand its product line to include a greater variety of fashion basics. The catalog business has also secured new print programs utilizing its garments, which should provide a strong foundation for growth in upcoming quarters. The strong growth in private label programs came from new customers and expanding programs with existing customers.
Art Gun continued its characteristic high-growth trend during the 2015 second quarter with 43.5 percent sales growth on a 52 percent increase in volume over the comparable prior year period. Growth in this business was primarily due to an increasing awareness of Art Gun's excellent consumer fulfillment service utilizing its proprietary software and state-of-the-art digital printing equipment.

The company's branded segment enjoyed net sales growth in all of its units with the exception of Soffe, which experienced a net sales decline of approximately $3 million in the quarter. This decline, along with the sale of The Game business in early March, resulted in net sales for the branded segment of $43.7 million compared with $48.3 million for the fiscal 2014 second quarter. Soffe's sales decline occurred primarily within its sporting goods channel as cooler weather delayed replenishment orders on certain products. We have seen positive indicators regarding the sell-through of Soffe's spring line. This and the nearly 70 percent growth in Soffe ecommerce sales indicates to us that Soffe has stabilized and is positioned for future growth.

Salt Life achieved a 6 percent increase in net sales for the quarter. This increase was below expectations and mainly attributable to shipment disruptions associated with the decoupling of Salt Life's systems from those of The Game business sold during the quarter. With that process now completed, Salt Life's strong historical growth trend is expected to return in the second half of the fiscal year. Junkfood's sales increased 2.3 percent from the prior year period, with gross margin expansion resulting from an expanding customer base and strong growth in its ecommerce business.

Robert W. Humphreys, Delta Apparel, Inc.'s chairman and chief executive officer, commented that “the results of our second quarter are very encouraging and suggest to us a strong second half to the fiscal year. We are beginning to see the results of the strategic initiatives that we have been implementing over the past six months, most visibly in this past quarter's sale of The Game branded collegiate headwear and apparel business for approximately $15 million. The assets sold excluded the accounts receivable and certain undecorated apparel inventory from which, upon collection and sale, we should amass an additional $6 million. Net of direct and indirect selling, transactional and transitional expenses, the sale resulted in a second quarter pre-tax gain of $5.6 million, or $0.43 net earnings per share. Aside from receiving more than a 60 percent premium over book value on these assets, the sale enables us to focus our resources on more strategic areas of our business and that can take advantage of our efficient manufacturing platform.”

“In that regard, we have expanded our screen printing operations in El Salvador to service our growing private label and full package businesses. We are also expanding our Honduran textile operations with new equipment allowing us to internally produce open-width fabrics used in many of our business units. This should reduce our reliance on purchased fabric and further leverage our internal production, which should result in cost savings beginning in fiscal 2016.”

“Ecommerce is another area where we are investing resources, and our second quarter provides a good example of the high growth potential in that area. Overall, our ecommerce business grew almost 70 percent during the March quarter, with our branded consumer sites for Salt Life, Soffe and Junkfood, each increasing sales by over 60 percent. In no other business is the value of ecommerce more apparent than in Art Gun. Art Gun's facility boasts cutting edge equipment and industry-leading proprietary software specifically geared to facilitate ecommerce business. We expect Art Gun to continue its rapid growth, and have invested in systems designed to support that growth into the future.”
“Art Gun's technological competencies are also being leveraged to enhance Junkfood's direct-to-consumer business by giving Junkfood more flexibility in its ecommerce product offerings. Junkfood's team continues to be intensely creative in developing new apparel garments and graphics, as well as producing marketing programs attuned to the latest social media trends. While Junkfood showed modest sales growth in the fiscal 2015 second quarter, it had strong quarter-over-quarter margin expansion. Based upon its expanding customer base, new programs, ecommerce growth and fresh product lines, we anticipate stronger sales growth over the next several quarters.”

“While demand for Salt Life products continued at record high levels during the quarter, sales growth in that business was less than anticipated due to the deferral of March quarter shipments to April in connection with the separation of Salt Life's systems from those of The Game business. The issue was exacerbated to a small degree by unusually cold weather in February and March. We are pleased that Salt Life's spring line has been well-received, and we anticipate a strong June quarter and return to Salt Life's previous growth rates as we go into the second half of the fiscal year.”

Humphreys concluded, “All of our business units have shown improvement during the quarter through sales growth, margin expansion, or both. During the remainder of the year we anticipate increased sales across the board and, due to lower cotton and energy prices along with further manufacturing cost reductions, we expect even stronger improvements in our profitability.” 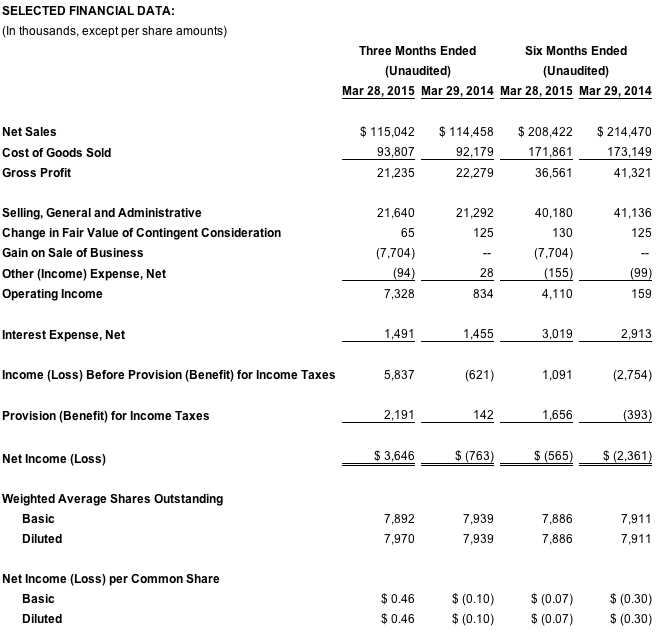