It took
Jorgeson and Caldwell 19 days to summit, something they have attempted together
for the past seven years. The Dawn Wall is a 3,000-foot tall, half-mile long,
granite face with razor sharp holds and continuous difficult climbing. Its
route consists of 31 pitches, with individual pitches being rated the most
difficult in the world to climb (14d).

“It's an amazing feeling to accomplish something you have devoted your
life to for years,” said Kevin Jorgeson.
“Free climbing the Dawn Wall had been considered impossible. Tommy dreamed
it could be done, and I could not be more honored to have been his partner on
this journey. I hope it might inspire others who may not have been familiar
with rock climbing to experience it for themselves, and I'm looking forward to
mapping out my next objective.” 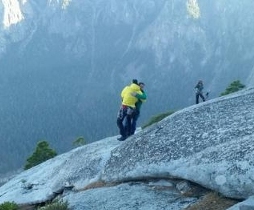 Jorgeson and Caldwell, picture to the left embracing after completing the climb, free climbed the Dawn Wall, meaning they used nothing
but their hands and feet to move upward, relying only on their ropes to stop
falls and pull equipment. When they were not climbing, they occupied
portaledges, 4-foot-by-6-foot hanging cots with aluminum frames that can be
anchored to the rock wall more than 1,000-feet off the valley floor.

“Kevin and Tommy have truly created a breakthrough in the world of rock
climbing, and we are incredibly proud of them,” said Greg Thomsen, managing director of adidas Outdoor US.
“They have made history today in the sport and have accomplished a truly
amazing feat, not only in establishing the hardest big wall rock climb in the
world but also doing it with impressive style and grace. They have set a new
standard for dreaming big and never giving up until those dreams come
true.”

Santa Rose, Calif., native Jorgeson began climbing competitively at the age
of 14. He started focusing solely on outdoor climbing in 2002 and quickly
gained a reputation for establishing and accomplishing highly-complicated and
dangerous routes. In 2009, Kevin co-founded Pro Climbers International
(PCI), an agency and advocacy group aimed at developing and inspiring
generations of climbers.