Crocs Returns to Profitability and Growth in Q3

Crocs, Inc. reported its first profit and year-over-year sales gain since second quarter 2008 and posted healthy future orders, led by demand for the new Crocband collection. Year-over-year spring-summer 2010 wholesale pre-books are running up 131% in the Americas, more than 30% in Europe, and 61% in Asia.  In the U.S., pre-bookings were up 60% at quarter-end.
Revenues in the third quarter inched up 1.7% to $177.1 million, well ahead of guidance in the range of $150 million to $160 million. The quarter included $11.5 million from higher-than-planned sales on inventory that had been impaired in Q3 2008.  Wholesale sales declined 14.7% to $107.1 million, partly due to intentional efforts to reduce the number of retailers selling its product. Retail sales climbed 39.6% to $53.9 million and Internet sales jumped 61.0% to $16.1 million. CROX ended the quarter with 310 company-owned stores versus 262 a year ago.
Revenues from the Americas region were down 2.8% to $79.3 million as consumer direct channel growth offset wholesale declines. On a conference call with analysts, John Duerden, president and CEO, said the company has  been particularly focusing on improving its U.S. business by cleaning up distribution, improving its in-store presence, reducing inventories, restoring its relationship with a number of key accounts it had lost, and implementing a specific program to restore its business with a key, unnamed independent retailer.  “We have made good progress in a number of these areas and I believe the success of our spring-summer pre-books is an early indication that we are regaining traction in the critical U.S. wholesale market,” said Duerden.
Sales in Asia grew 7.5% to $68.0 million, driven by strength in both retail and wholesale channels. Sales in Europe increased 2.0% to $29.9 million as retail and Internet more than doubled to offset reduced wholesale sales.
The average selling price for third quarter was $17.69 versus an average of $19.33 in Q3 last year. New products, which represented 27% of third quarter units, had an ASP of $21.54. Core products represented 34.7% of unit sales. Sales of its Classics represented 15.7% of sales.
The improved gross margins reflected the impact of impaired units as well as cost savings from the consolidation of its U.S. warehouse, supply chain rationalization by sourcing higher import duty products from company-owned duty-free manufacturing facility in Mexico, and from favorable changes in product mix primarily driven by its consumer direct channel. The SG&A reduction was a result of currency swings and ongoing cost reduction efforts.
Earnings reached $22.1 million, or 25 cents a share, in the quarter against a loss of $148.0 million, or $1.79, a year ago. The latest quarter included a $9.6 million gross margin benefit due to sales of product that had been previously impaired, a $1.0 million gain from foreign currency exchange rate fluctuations, and $14.4 million one-time tax benefit related to a change in the company’s corporate tax structure. These positive effects were partially offset by the unfavorable impacts of $3.6 million in impairment and restructuring charges and net charitable donations.
CROX still expects a loss between 15 to 20 cents a share in Q4, which is traditionally its weakest quarter. Sales are expected between $110 million and $115 million, down from $126.1 million. 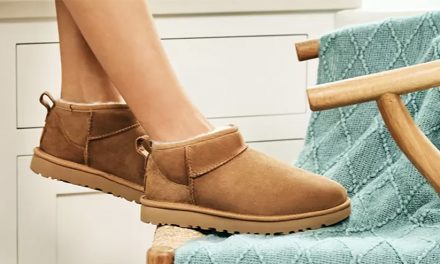