Helped by a strong wholesale and e-commerce sales in the Americas, Crocs Inc. (Nasdaq:CROX) reported adjusted earnings rose
36.2 percent in the first quarter, to $6.4 million, or 7 cents per share.

After charges, the shoe manufacturer had posted a loss of $6 million, or 8 cents a share, in the year-ago period.

Revenue in the quarter expanded 6.5 percent to $279.1 million. Sales exceeded previous guidance of $260 to $270 million in large part due to improved supply-chain execution and delivery performance to wholesale partners that reduced the number of unfulfilled orders at the quarter’s end relative to prior years. Sales grew 9.2 percent on a currency-neutral basis.

On a conference call with analysts, Gregg Ribatt, CEO, said the quarter reflected the “meaningful progress” the company has made since undergoing its repositioning efforts over the past 21 months.

Retail sales in the Americas increased 3.6 percent for the quarter, reflecting positive comps of 2.9 percent and better productivity in the stores open during the past year. North America comps turned positive for the first time in 10 quarters. E-commerce in the Americas grew 43.5 percent, and total America direct-to-consumer comps were up 12.2 percent.

In other regions, Asia revenues reached $104.5 million, up 7.9 percent, led by a 27.3 percent gain in e-commerce and a 9.2 percent increase in wholesale. In Europe, revenue was $50.3 million for the quarter, down 7.9 percent due in part to store closures and a planned change in its shipping window to better align product delivery across regions. 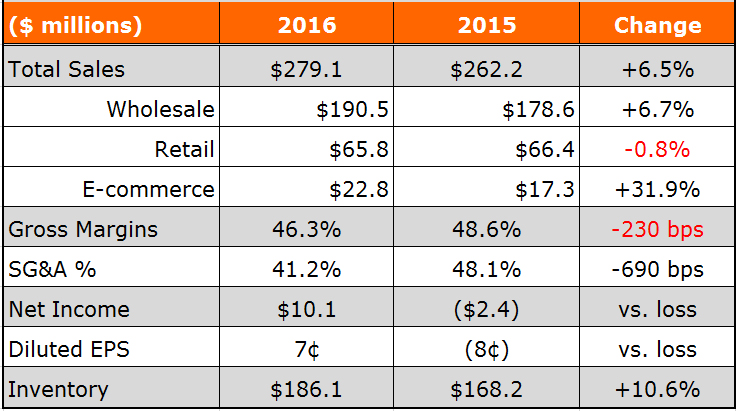 Besides the Americas performance, a highlight in the quarter was overall retail, noted Ribatt. Direct-to-consumer comp increases were seen in each region.

Retail comps were up 3.1 percent in the quarter, with all regions reporting positive comps. Overall direct-to-consumer sales were up 9.9 percent, its fourth quarter in a row of positive gains. Led by the U.S. and Asia, global e-commerce revenue growth accelerated 34.3 percent on a constant-currency basis. Enhanced digital marketing efforts and a commitment to better in-stock positions on core product bolstered online growth.

From a product standpoint, Rees said Crocs’ current product line, the first developed by Michelle Poole, formerly of Sperry, has been well received with replenishment orders up approximately 20 percent in the first quarter and retailer feedback “remains extremely positive.”

By rationalizing its core clog assortment, approximately 20 percent of growth has been driven into its anchor styles including Classic and Crocband. This is enabling Crocs to consolidate volume across fewer SKUs, maximizing margins and simplifying its supply-chain execution, officials said. The brand’s made-for-her clog style, Freestyle, and a made-for-him version, Duet Max, have seen strong overall performance. The Swiftwater sandal, currently focused on men’s and kids, has seen “exceptional growth” and will be expanded to women’s in 2017. Sanrah, a collection of embellished sandals, has seen strong early season performance especially with the mini-wedge silhouette while the brand’s licensed range, including Star Wars, Frozen and Realtree, has continued to perform well.

“More broadly, among the areas that are working best are new molded silhouettes, seasoned and trend-right colors, and enhanced graphics,” Rees said. “Our new product generated over 40 percent of global revenues in Q1, with two of our new introductions, the Duet Max Clog and Santa Cruz Luxe making it into our Top 10 selling styles globally.”

The bottom line benefited from a reduction in adjusted SG&A by 441 basis points to 41 percent of sales. The improvement was due to higher revenue, combined with savings from its reorganization efforts, the timing of marketing expenses, and the impact of currency changes.

Finally, inventory was up less than 1 percent, compared with sales growth of 6.5 percent due to investments in inventory management.

One challenge continues to be China, but Crocs has reached agreements to replace certain retail locations currently managed by some challenged distributors with new company-owned retail operations. It’s also shifting some territories from trouble distributors to stronger existing distributors. Rees said Crocs expects to have its distributors issues in China resolved by the end of the second quarter.

Adjusted gross margin for the quarter came in at 46.1 percent, down 247 basis points from the prior year. The decline was due to a negative currency impact of 106 basis points, as well as its successful year-end sale period of January and higher distribution costs. Crocs’ average selling price for its footwear in the quarter was $16.85, a 3.4 percent reduction, mainly due to currency pressures.

Crocs expects to see sequential gross margin improvement from the first quarter to the second quarter of approximately 450 basis points, reflecting higher demand for in-season products, partially offset by the impact of currency. Added Carrie Teffner, Crocs’ CFO, “As we get to the back half of the year, we expect meaningful improvement in gross margins on a year-over-year basis.”

The company expects second-quarter revenue in the $340 to $350 million range compared to $345.7 million last year. The guidance reflects the timing impact from earlier shipments in the first quarter due to supply-chain improvements. Additionally, revenue growth is anticipated to be in the mid-single digits, on a currency-neutral basis, in the first half of the year. 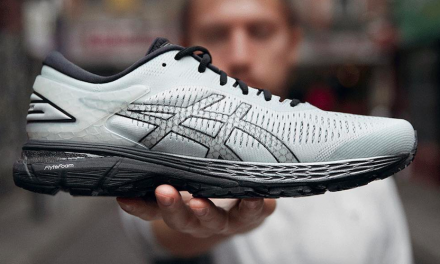