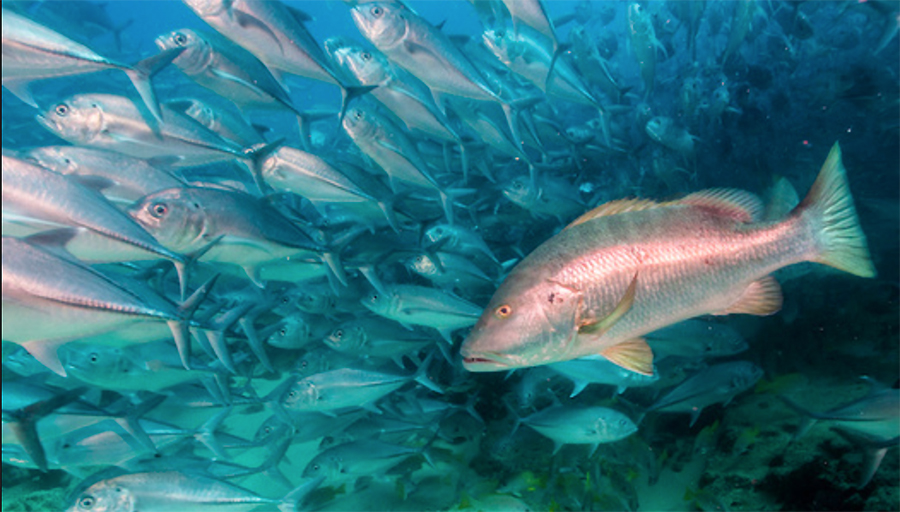 U.S. Secretary of Commerce Wilbur Ross recently met with recreational fishing and boating industry leaders at Maverick Boat Group, Inc. in Fort Pierce, FL, to discuss marine recreational fishing access and the importance of marine recreation to the U.S. economy. Following a tour of the manufacturing facility, Secretary Ross indicated good news for South Atlantic red snapper and that his office is finalizing the rule requiring descending devices onboard vessels targeting snapper and grouper in the South Atlantic.

During the visit, Ross spoke with the group about the challenges facing the marine industry amid COVID-19 and actions the Administration could take to promote recreational access and fuel economic growth. Rep. Brian Mast (R-FL) also participated in the roundtable.

Representatives from the industry included boat builders, fiberglass, resin and component manufacturers, engine and trailer manufacturers, and fishing equipment manufacturers, among others, who help create jobs across the supply chain in the U.S. According to NOAA Fisheries, marine recreational fishing is a major driver of the economy with America’s 9.8 million saltwater fishermen supporting 472,000 jobs and annually contributing $67.9 billion in sales.

“It was wonderful to have Secretary Wilbur Ross in Florida, the ’Fishing Capital of the World,’ to see first-hand the importance of the sportfishing and boating industries not only in the state but nationwide,” said Kellie Ralston, Southeast Fisheries Policy director for the American Sportfishing Association. “We greatly appreciate his focus on actions that can assist us as we move forward including fisheries management and economic issues. He continues to champion increasing outdoor recreation opportunities, an effort that has become even more important as we emerge from these difficult times. In addition, Rep. Mast has been a tremendous advocate for us on water quality and natural resources.”

“We thank Secretary Wilbur Ross for his commitment to marine conservation and improving public access,” said Jeff Angers, president of the Center for Sportfishing Policy. “We greatly appreciate Secretary Ross spending time with us this morning to discuss the challenges facing recreational fishing and boating both on and off the water. Secretary Ross’ visit to Maverick Boat Group demonstrates the Administration’s continued support of growing the outdoor recreation economy and promoting public access to America’s marine resources, especially as our nation recovers from the COVID-19 pandemic.”

As the economy is reopening, industry executives are focused on keeping their employees safe while providing exceptional customer service to customers. Outdoor recreation accounts for 2.2 percent of U.S. GDP with recreational fishing and boating topping the list as the largest contributor to that output.

“We were delighted to welcome Secretary Ross to Fort Pierce for a firsthand look at our manufacturing process,” said Scott Deal, president of Maverick Boat Group. “Powering the recreational fishing and boating industry through these challenging economic times will require support from the Administration on good fisheries policy and fair trade policy. We thank Secretary Ross for discussing these important topics with us today.”

What the South Atlantic Descending Device Requirement (Amendment 29) Means
The recreational fishing and boating community has long advocated for the use of descending devices to reduce the mortality rate of prized reef fish such as snapper and grouper. A descending device is a weighted hook, lip clamp or box that will hold the fish while it is lowered to a sufficient depth to recover from the effects of barotrauma and release the fish. On April 27, a coalition of recreational fishing and boating organizations supported the descending device rule in a public comment letter.

Anglers have been frustrated in recent years by the ever-decreasing South Atlantic red snapper season as they encounter more fish on the water. One problem has been the rate at which these fish die after they are released due to the effects of barotrauma, a condition that results from increased pressure of internal gasses as deep-water fish are brought rapidly to the surface. NOAA Fisheries counts the high number of estimated dead discards against harvestable quota each year resulting in shortened seasons. Indications earlier this year from NOAA Fisheries pointed to a 2020 season as short as three days.

“The science is clear that the use of descending devices improves the survivability of these deep-water fish,” said Angers. “Although many anglers are already using descending devices, we look forward to Secretary Ross implementing the descending device requirement for all fishermen targeting snapper and grouper in the South Atlantic to better conserve the resource and allow for more opportunity for public access in the future.”

Members of the South Atlantic Fishery Management Council are to be commended for their leadership on the descending device requirement. Long before the Council approved Amendment 29 for secretarial review, the Council actively promoted best fishing practices when catching and releasing fish. In addition, the American Sportfishing Association and Coastal Conservation Association educated the angling public through their programs FishSmart Conservation Project and ReleaSense, respectively. The Florida Fish and Wildlife Conservation Commission also has a series of videos on its YouTube channel demonstrating how to use descending devices to treat barotrauma. Various descending devices have been manufactured for years and are available at retail. With the aforementioned educational efforts, thousands of anglers and guides already have received descending devices at no charge.