Columbia’s Tested Tough in Pink Collection, a partnership with the National Breast Cancer Foundation (NBCF) and key participating retailers, raised over $123,000 in 2013 pushing the overall donation from the campaign to over $1 million since 2007.

“Columbia Sportswear Company has not only been ‘trying stuff since 1938’, as their company tagline denotes, they’ve clearly accomplished stuff as well,” says NBCF Founder & CEO, Janelle Hail. “Since 2007, they have raised over $1 million and helped NBCF provide thousands of free mammograms and early detection services for underserved women in all 50 states.”

Millions of women each year are diagnosed with breast cancer. But, early detection and treatment is the most effective way to overcome cancer and live life to the fullest. We help save lives by increasing awareness of breast cancer through education and providing mammograms for those in need. With the average cost of a mammogram being $100, our support has assisted almost 10,000 women and their families.

“This milestone would not be possible without the incredible support from the National Breast Cancer Foundation, our retail partners, and our consumers,” said Scott Welch, Global Corporate Relations Manager, Columbia Sportswear Company. “We are very excited about the future of Columbia’s Tested Tough in Pink campaign and our continued partnership with NBCF.”

The NBCF is currently rated as a four star organization by Charity Navigator, their highest rating, for nine years. In 2012, 86% of their spending went to programs, including providing mammograms, breast health services, education, and support for those in need. This is accomplished through partnerships with hospitals and breast health facilities across the country, community outreaches, and digital educational and support resources.

Columbia’s 2014 Tested Tough in Pink Collection will be at retailers this Fall. 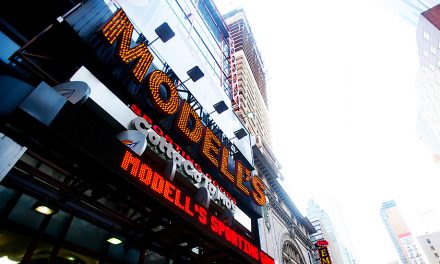 Modell’s Secures Suspension Of Bankruptcy Until May 31

Dead Down Wind and Mossback Team Up