Gov. John Hickenlooper proposed Tuesday combining the Colorado Division of Wildlife and Division of Parks and Outdoor Recreation into a new division. The reorganization would streamline state government, improve service to customers and preserve critical programs by combining resources of the two divisions.

“We committed on our first day in office to making government more efficient, effective and elegant,” Hickenlooper said. “This proposed change in the Department of Natural Resources would do all of those things and continues our work with the legislature to more efficiently provide state services in these difficult budget times.”

The reorganized division would remain a part of the Department of Natural Resources and would continue to focus on providing excellent outdoor recreation experiences for boaters, hunters, campers, anglers and many others who cherish Colorado’s unmatched natural environment. The new division would be called the Division of Parks, Wildlife and Outdoor Recreation, or CDPW.

Hickenlooper and Mike King, executive director of the Department of Natural Resources, will talk about the proposal and the creation of a transition team at a joint meeting on Thursday of the Colorado State Parks Board and the Colorado Wildlife Commission. The meeting is scheduled from 10 a.m. to noon at the Division of Wildlife’s Hunter Education Building, 6060 Broadway, Denver.

Early estimates show the creation of the new division would allow the elimination  through attrition  of roughly 25 positions, as well as reduce duplication of equipment, including fleet vehicles. Those and numerous other efficiencies would lead to significant cost savings while also preserving a number of important Parks-run programs that create significant benefits for wildlife. An exact dollar figure for the costs savings is not yet known.

“Uniting the outstanding personnel who work on behalf of our parks and wildlife would result in a stronger, more effective and more efficient approach to managing our state’s irreplaceable natural resources,” King said. “This is an opportunity for our Department and our employees to collaborate and streamline the way we do business while preserving opportunities for outstanding outdoor recreation and maintaining our commitment to protecting and managing wildlife.”

Because Colorado State Parks faces further budget reductions in the upcoming fiscal year, combining the agencies would meet the twin goals of more efficient delivery of services and continuation of critical programs.

Those include efforts to limit invasive species in Colorado lakes, preserve important landscapes through voluntary agreements with other governments and private land owners, and develop the recreational trails program that assists in building and maintaining trails to enhance wildlife viewing and provide greater access to the outdoors.

The Colorado State Parks Board and the Colorado Wildlife Commission would be combined into a single oversight board. The newly unified board would, along with division employees and other stakeholders, help guide the consolidation creation of the agencies into a new division.

Dick’s SG Sizes Up the Competition 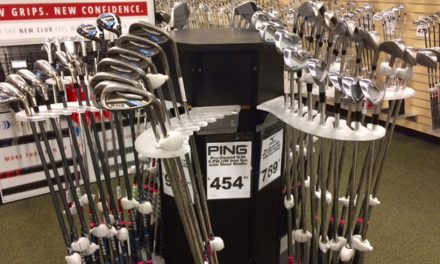