Close-Outs Dominate the Action at WSA…

We just knew what kind of show WSA was going to be when the first people we ran into in the aisle was an executive team from one of the countrys largest family footwear chains and they had their CFO with them — and he brought his calculator with him.

Our first impressions were further supported by the smiles — actually grins — on the faces of the buyers, DMMs and GMMs as they loaded up on off-price inventory that will certainly build margins — and profits — for the year.

The theme we expressed after the last show, When Does a Good Show Get Too Big (SEW 0307), was further impacted at this show as some shoe vendors pulled up stakes and left the show floor for the safe — and much cheaper — confines of the Venetian Suites.

After all, you dont need to spend big bucks on an elaborate booth if your main mission is to move distressed goods. It proved to be the right move for many of the companies that left the floor as show traffic slowed for the fourth show in a row, but may have actually given a boost to those that stayed and offered fresher looks and energy on an otherwise dull floor.

The hopeful speculations of “Fridays the big day” and “people are coming for the weekend” never panned out as traffic in the athletic sector appeared to be generated primarily by senior retail execs hunting down deals and sales reps with little to do but catch up with friends.

The afore-mentioned execs left on Friday night and the reps never got busy because their accounts either stayed home to take advantage of tax-free weekend sales or just stayed away due to cost reductions and the timing of a show on the front end of the all-important back-to-school selling season.

While the show started in earnest on Thursday, we talked with many retailers that arrived a day or two early to get first crack at the off-price lists, with some execs telling us they were picking up shoes that had been cancelled in the last few weeks, buying goods back at prices that were generally 50% off and more. Some retailers noted they were able to name their prices due to the magnitude of the pairs available.

Most of the vendors want to ship the goods right away to drive down their inventories and make room for new product on the water. We expect that this will have a major positive impact on BTS sales at retail, further exacerbating the price deflation issue we discussed recently (SEW 0325, 0329).

We see the bulk of this product selling through over the next few months as consumers cash  and hopefully spend — their $400 per child tax-credit checks, but we also expect to see a domino effect feeding the glut at wholesale as retailers push first line POs back in the queue, affecting business into spring 2004.

The tax-free weekends instituted in a number of states — Texas, Georgia and the Carolinas all ran over the weekend — look to be a boon to business as well. Some speculated that customers were pre-spending their tax rebate checks. Georgia added an extra tax-free day (Thursday) to their calendar last week and retailers with a strong presence in the Peach State reported robust results. One retailer reported calling the home office to make sure the numbers were not a mistake.

From the floor, we found more questions than answers on a few key points:

The Retro Question
After being on life support for the majority of the spring, retailers are finally admitting that the Retro category is on its way out. The sea of plain vanilla, low-tech old school footwear seems to have played itself out. One senior retail exec told SEW that they saw it working through B-T-S, and then its done. It appears we are now talking days and weeks instead of months.

The realities of the expected shift we have all been discussing for the last six months will certainly impact a number of players on both the vendor and retail side. Those brands that built volume over the last two years on the backs of this trend will be the ones hurt most if they did not develop any additional product following outside of the category.

The Next New Thing
Euro active, once thought to be a contender to be the next new thing, has not shown the ability to sell more than 10 miles from each ocean, limiting its long-term potential. We cant even begin to name the number of brands that were jumping into the category that has brought Puma so much good fortune over the last few years, but we fear it may be a little too much too late to chase the looks that were driven by non-basketball retro athletic and motorsports looks.

Some urban specialists are thinking that running may be the next play, but that its too early in the game to make that call. Major retailers we spoke with were not making larger commitments to the category and seemed to be taking a “wait n see” position on the next breakout trend.
Retailers and vendors who were heavily dependent on this look are in for trouble until the next new thing reveals itself.

Nike/Foot Locker
It appears the two protagonists have achieved some level of détente in their on-going and very public feud. Most surveyed at the show did not feel that this signaled a return to the former relationship with full access to allocated styles. Rather, observers saw an agreement to stop fighting in public and to find alternative ways to do business that would satisfy the mission of each party. Conventional wisdom is that it will be years, if ever, before the two parties restore the former level of doing business.

Rumors continued to fly that FL had decided to drop the Reebok I3 pressure shoe and replace it with increased allocations of AF1. Those surveyed were about evenly split between this occurring or not. Officials for the parties affected by the speculation seem to be touting the “business as usual” line. Outside observers felt that the final decisions had not yet been made and that negotiations were continuing. Stay tuned.

AF1 remains the hottest style in the market. According to SportscanINFO, nearly 1 million pair were sold in the last 8 weeks, as one AF1 style or another topped the top seller list nearly every week.

Royal Elastics. Spanking new looks coupled with improved execution from the KSWS management created a lot of traffic at the emerging brand.

Keen. Potential customers mobbed Angel Martinezs fresh take on the rugged sandal. Word is that early tests proved quite successful, but that distribution would be limited to authentic outdoor retailers. Executives said REI and Galyans are committing to all-door programs for the line.
Pony. Euro active, but a  lot more accessible than some other brands.  Merging that “near Force” look with euro color — plus TONS of attitude. Look for the GBMI/Firm partnership to pay big dividends.

Reebok. Clearly benefiting from the comeback story of the year and played well as the largest athletic footwear company in attendance. Sparkled from the attention the big guys gave them as key competition hid from potential traffic opportunities — and buzz.

Puma. What can we say, still the darling and while the booth was not swamped by the little guys clamoring for a piece of the line, the meetings — and product — were all high quality…

Easton-Bell Weighed Down by Fees and Debt… 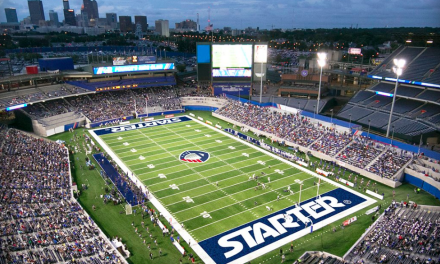