Callaway Golf Company’s board of directors authorized a plan to spend $50 million buying back its common stock, which has fallen about 10 percent since the company reported second quarter results.

The move follows reports of rapidly dropping golf sales by Dick’s Sporting Goods, Adidas Group and other companies. On Thursday, Mizuno reported sales of custom fitted golf clubs was flat and described the overal outlook for golf as “bleak.”

Callaway said the repurchase program does not require the company to acquire a specific number of shares and it will remain in effect until completed or terminated by the company’s board.

Callaway’s sales declined by $18 million, or 7.2 percent in the second quarter ended June 30, compared with the same quarter in 2013.  The decline drove down gross margin 100 basis points and net income 70 percent to $3 million, or 4 cents per share. Calloway’s board declared a regular quarterly cash dividend of $0.01 per share on its common stock.

The dividend is payable on Sept. 12, 2014 to shareholders of record at the close of business on Aug. 22. 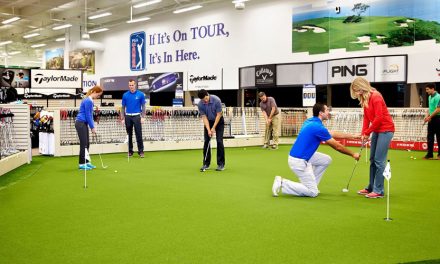