Cabela's Inc. reported comparable-store sales fell 10.1 percent in the fourth quarter as ammo sales fell much sharper than expected and holiday sales disappointed. The Nebraska-based hook-and-bullet retailer said firearms and ammo sales comped down in the mid-20s in the fourth quarter and that it expects the drop off in ammo sales to continue dragging comp store and Direct sales growth into negative territory through the first half of 2014.

Ammo sales comped up about 100 percent in the first six weeks of last year as spending surged in anticipation of stricter gun control laws after a deranged teenager killed 20 children and seven adults as an elementary school in Newtown, CT. CAB executives expect comp store sales for 2014 s to decline in the mid-single digits, up from earlier expectations of low-single digits. “We have probably added maybe 100 or 200 basis points,” he said. Firearms and ammo accounted for 13 and 10 percent respectively of CAB’s 2013 sales.

CAB’s Merchandise sales increased 3.1 percent to $1.08 billion in the fourth quarter ended Dec. 28, 2013, as a 7.3 percent increase in Retail store revenues ($711.8 million) more than offset a 4.1 percent decline in Direct revenue, which reached $369.7 million. Comparable store sales excluding firearms and ammunition were down 3.5 percent, way off the 5.3 percent growth reported in the third quarter. Comps grew in hunting apparel, men’s casual apparel, footwear and non-shooting related hunting equipment in the quarter. Online, total sales of fishing, camping and most soft goods grew and sales of Cabela’s branded products grew to 32.5 percent of sales, up 490 basis points.

”The rest of the categories are hanging in there pretty well,” CFO Ralph Castner told analysts during the company’s earnings call. “[It’s] about where we expected, were we’d see a shift out of firearms and ammunition into some of its other categories.”

The shift helped boosted merchandise gross margin 40 bps to 36.6 percent despite small margin declines in hunting and general outdoor categories. Still, operating margin declined 80 bps to 20.9 percent at Retail and declined 190 bps to 14.1 at Direct and transactions and average sales per transaction declined 5 percent during the quarter.
Earnings per share came in about 6.4 percent below Wall Street estimates.

CAB ended the quarter with inventory valued at $644.9 million, up $92.3 million, or nearly 17 percent, but Millner said the quality of inventory was very good.

“We are going to exit winter goods cleaner than we have ever done,” said Millner. “And remember we are opening 10 stores in 2014 that we bought inventory for and we've got some really big stores coming in the first four or five months of the year.”

CAB plans to add 14 stores the first three quarters of 2014 that will increase its square feet of retail space by 17 percent.

Millner said weather-induced store closings were flat with the fourth quarter of 2012 and if anything, the Polar Vortex helped margins by spurring sales of higher priced outerwear.

The retailer saw an “enormous shift in traffic to mobile devices” during the quarter, but that may have reflected improvements CAB has made to its mobile experience rather than consumers shifting orders online because they could not drive to a store. Additionally, CAB’s expanded its store-to-door capabilities, which means it can fulfill online orders from individual stores when it is out of inventory at its fulfillment center. That enabled CAB to fulfill a lot more orders for ammo where local laws allow online shipment and a growing number of those orders are being made through the mobile channel. CAB expects to add personalization and two-click checkout for mobile customers later this year.

“I can't even imagine where a company would be, us or anyone else, if they did not have that robust user experience on mobile devices,” said Millner.

Millner noted the way CAB allocated online advertising costs likely exaggerated the decline in margins at the Direct business because of the way the retailer allocates advertising expenses. For example, if CAB runs a digital ad that directs shoppers to its Denver store, the expense still gets charged to the direct business. “Those lines on advertising are blurring greatly between channels,” he said. ”You just can't split them that way anymore.”

While ammo sales dropped off more than expected, CFO Ralph Castner said they were up still up double digits compared with the fourth quarter of 2012 and up high-single digits in the first six weeks of the current quarter. “We're pretty optimistic that ammo is going to have a longer tail,” Castner said.
Millner said CAB foresees ammo sales eking out comp gains in the back half of 2014, but added that margins in that business will likely return to more normal levels, as vendors continue to ramp up production. The bottom line is that CAB will have to trim costs to meet its 2014 profit targets, Castner said.

Backyard Collective to Wrap up Year in Bend, OR

First Ever Backyard Collective to Hit Vancouver, BC Wednesday 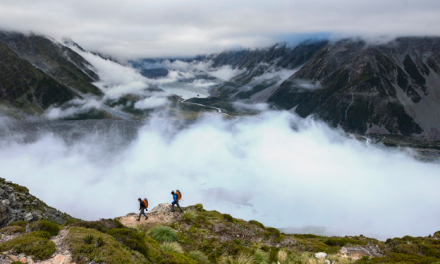 Kathmandu To Launch In North America With Outdoor Retailer Debut