Selling and administrative expense as a percentage of net sales was 30.2 percent in the fiscal 2015 second quarter, versus 30.8 percent in the second quarter of last year. The company leveraged selling and administrative costs for the quarter despite a $1.6 million increase in overall selling and administrative expense from the prior year. The overall increase was due primarily to higher employee labor expense reflecting an increased store count, as well as expenses of $1.1 million related to the company's publicly-disclosed proxy contest which was settled prior to its annual meeting of stockholders, partially offset by a decrease in advertising expense.

In reporting first-quarter results, the company said it expected same store sales to increase in the low to mid-single-digit range, while earnings per diluted share were expected in the range of 12 to 17 cents a share, excluding costs incurred related to a publicly-disclosed proxy contest.

“We are pleased to deliver improved sales and earnings growth for the second quarter,” said Steven G. Miller, the company's chairman, president and CEO. “Despite cycling against the soccer-related business generated by last year's men's World Cup, and facing the ongoing economic and recreational impact of the well-publicized drought in our core California markets, we were able to generate same store sales increases in each of our major product categories of apparel, footwear and hardgoods during the period. While these headwinds have continued to impact our third quarter, we remain encouraged by the strength we are experiencing across a number of product categories. We believe we have a strong promotional plan in place to generate positive same store sales for the period.”

The company's board of directors have declared a quarterly cash dividend of $0.10 per share, which will be paid on September 15, 2015 to stockholders of record as of September 1, 2015.

For the fiscal 2015 third quarter, the company expects same store sales to increase in the low single-digit range and earnings per diluted share to be in the range of $0.28 to $0.34. 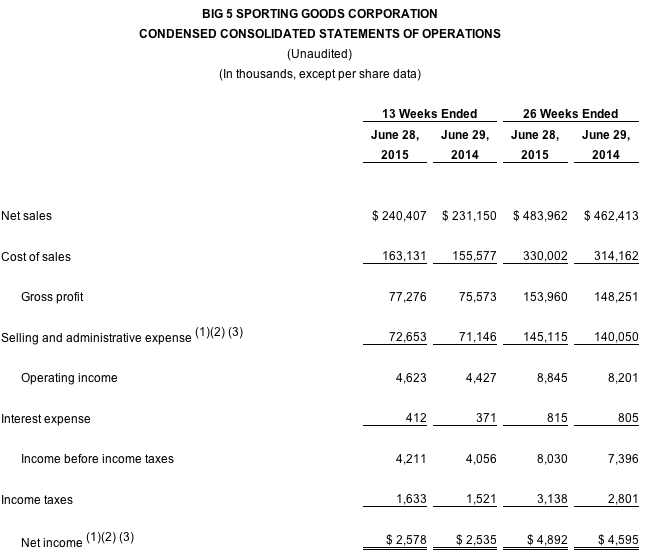 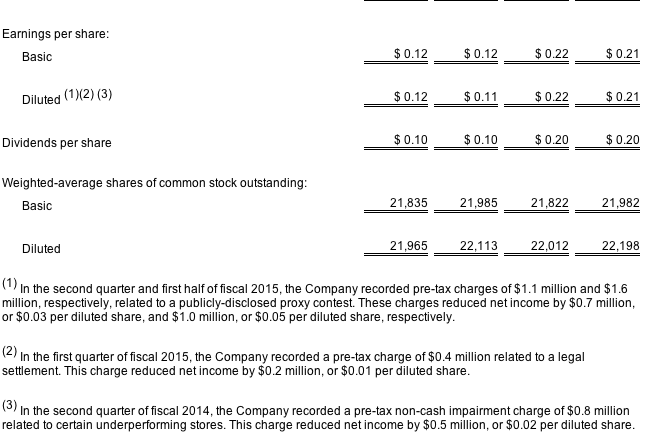