Big 5 Sporting Goods Corp. reported its second-quarter earnings came in line at the lower end of guidance while sales fell short of plan. Sales were hurt by challenging comparisons against strong World Cup sales in 2014 as well as the continuing impact of the drought in its Western markets on certain summer-related product categories.

“Although we delivered earnings in-line with our guidance, our sales fell slightly short of our expectations,” said Steven G. Miller, the company's chairman, president and chief executive officer. “Our footwear category comped positively for the period, while our apparel and hardgoods categories each comped down low single-digits. As expected, sales were challenged by cycling the benefit of Men's World Cup soccer-influenced sales during the third quarter of last year, as well as by the continuing impact of the drought in our markets on certain summer-related product categories.”

Miller continued, “Our same store sales are down low single-digits versus the prior year for the start of the fourth quarter, which historically is a low-volume period for our business. While we feel well positioned from a product and promotional perspective for the balance of the quarter, we do anticipate that the holiday period will be highly promotional again this year and, as always, weather conditions will be critical to the performance of our winter product business. We continue to work vigorously to improve same store sales and traffic trends, drive gross margin improvements and control expenses. To help ensure we are best positioned to succeed in the evolving retail environment, we have engaged consultants to assist us in evaluating store growth strategies and identifying potential avenues of profit enhancement, and we look forward to working on these initiatives.”

The Company's Board of Directors has declared a quarterly cash dividend of $0.10 per share, which will be paid on December 15, 2015 to stockholders of record as of December 1, 2015.

For the fiscal 2015 fourth quarter, the company expects same store sales to be in the low negative single-digit to low positive single-digit range and earnings per diluted share to be in the range of $0.10 to $0.20, including approximately $0.01 per diluted share of consulting expenses related to evaluating store growth strategies and potential profit improvement opportunities. As a result of the fiscal calendar, the fourth quarter of fiscal 2015 will include 14 weeks and the fourth quarter last year included 13 weeks. The company's same store sales guidance above reflects comparable 14-week periods.

During the third quarter of fiscal 2015, the company opened one new store and closed one store, ending the quarter with 439 stores in operation. For the fiscal 2015 full year, the company currently anticipates opening five new stores and closing five stores. 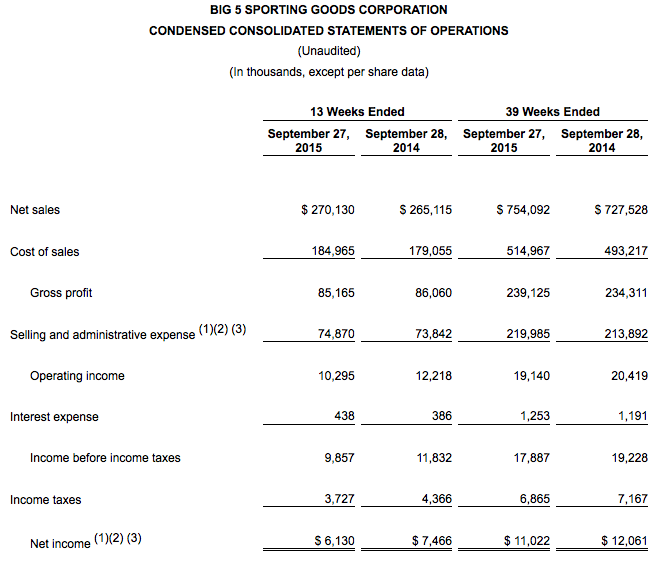 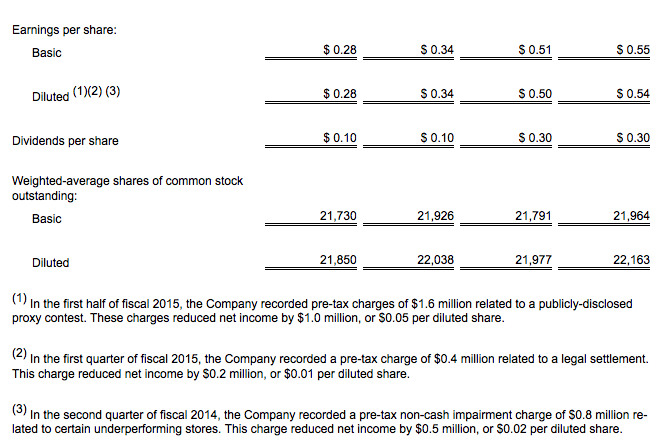