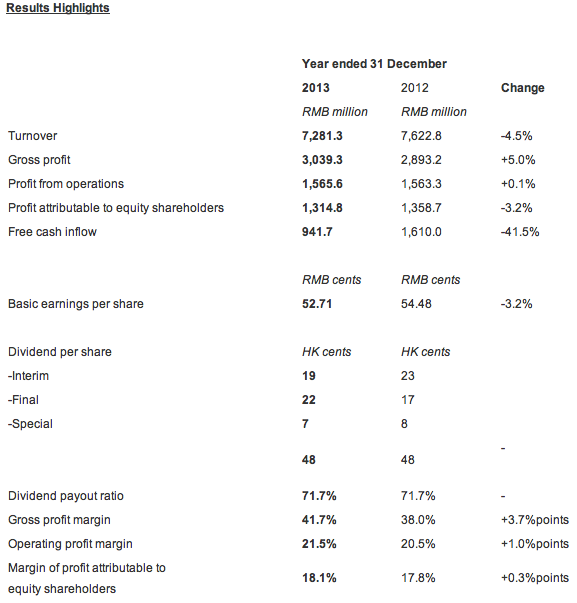 Operational and Financial Performance are Recovering

Riding on an effective and focused brand management strategy and continuing to integrate the influential sponsorship resources with innovative promotional channels, the Group has been enjoying leading brand recognition and desirability in China. The Group has successfully extended its partnership with the COC for the 2013 to 2016 Olympic cycle, making the Group the “Sportswear Partner of the COC” for eight consecutive years. In addition, the Group will provide professional and quality sportswear outfits for 16 China national teams under the Water Sports Management Centre, Winter Sports Management Centre and the Boxing and Taekwondo Sports Management Centre for competitions, awards ceremonies, training and daily usage. The strategic sponsorship not only makes the sponsorship resources to China’s national teams more comprehensive, but also creates synergy with the Group’s cooperation with the COC in solidifying ANTA’s brand image as the representative of China’s sports essence. During the year, the Group stepped up efforts in enhancing partnerships with elite national athletes. The Group signed endorsement contracts with two-time Olympic boxing gold medalist Zou Shiming and current Chinese table tennis champions Zhang Jike and Liu Shiwen. Furthermore, the Group has launched a brand new boxing training product series endorsed by Zou Shiming, and the integration of the pre-eminent athlete endorsers and effective marketing campaigns has successfully sustained the Group’s leadership and brand image.

During the year, the Group continued to strengthen its focus on mass market and its position as a functional sportswear brand, and struck deals with Rajon Rondo, a new generation NBA all-star point guard on the Boston Celtics, joining outstanding NBA players Kevin Garnett and Luis Scola to form ANTA’s most solid basketball resources. Furthermore, the Group’s professional image was further consolidated in the mass basketball segment with the launch of the brand new “Basketball is Priceless” marketing strategy and the designated Rajon Rondo and Kevin Garnett basketball shoes (“RR1” and “KG IV”), which were positioned as “National Basketball Shoes” with selling prices of only RMB399, and as the all-rounded marketing campaign stimulated the sales performance of the entire basketball series.

In addition, the Group sponsored the Olympic Day Run for the fifth consecutive year. This year, the event was held in 23 cities in China and attracted nearly 100,000 long-distance running enthusiasts throughout the country, the largest turnout in history. The Group also launched an interactive marketing campaign to highlight the technological value of signature running products, and integrated various media channels to enhance the brand’s reach in the mass market.

In order to enhance the Group’s control over retailers, and to improve their competitiveness, responsiveness to the fast changing market and their store efficiency, the Group proactively optimised its retail channel management system and launched a retail-oriented strategy to capture market opportunities. First, the Group built a retail-oriented mindset and appraisal system to measure performance according to retail operating data. Second, the Group closely monitored the performance of the retailers, shared the analyses of and feedback on product sales performance gathered by the real-time monitoring system with retailers on a regular basis in order to stay abreast of consumer demand and develop products that are truly welcomed by the mass market, and provided more precise order guidelines for retailers so as to stabilise their in-store inventory levels. The Group also encouraged its retailers to be flexible in taking replenishment orders so as to reduce inventory risks.

The Group has adopted flattened sales management and has streamlined its already lean and effective distribution structure so as to facilitate better interaction with retailers. The Group strictly required retailers to follow its retail discount policies so as to strengthen their competitiveness and profitability, and encouraged retailers to upgrade their store layouts in line with the Group’s sixth generation store image so that a pleasant shopping experience is created to boost customer traffic. The “COC Corners” and “Grand Basketball Corners” at key stores were also optimised to put the Group’s special product series in the spotlight. The Group prudently reviewed store opening plans and optimised all forms of retailers’ stores. The number of ANTA stores (including performance-based sportswear series and Sports Lifestyle series) by the end of 2013 stood at 7,757 (2012: 8,075).

To increase market share in the kids’ sportswear market in China and to enhance overall store efficiency, the Group strived to reinforce the competitiveness of distribution network of its Kids sportswear series. The number of Kids sportswear series stores in China stood at 881 (2012: 833) at the end of 2013. Moreover, the Group spared no effort in strengthening presence by progressively opening stores in key locations of major cities in the PRC. As at the end of 2013, there were 416 FILA stores operating in China, Hong Kong and Macao (2012: over 300). In the overseas markets, the Group selectively increased its penetration into the international market by cooperating with overseas retailers to open ANTA stores and concessionary counters in Southeast Asia, Eastern Europe and the Middle East so as to fuel long-term growth.

The Group emphasises the importance of product innovation, responsiveness in its supply chain, and cost and quality controls. It is devoted to enhancing R&D resources to deliver functional yet affordable sportswear products to better cater to different needs of sophisticated consumers. During the year, the Group launched the A-Silo 3.0 running shoe with improved functionality suitable for mid-to-long-distance runners, which not only protects runners’ feet, but also offers a greater degree of comfort to runners by keeping their feet dry. Meanwhile, the Group adopted external and self-invented technologies in apparel to enable wearers to resist unfavourable weather conditions. During the year, the Group introduced over 2,000, 3,000 and 1,500 new styles to our footwear, apparel and accessories portfolios respectively, to cater for both professional and casual users.

During the year, the Group adopted ISO international testing standards to ensure that the quality of ANTA products complies with international standards. The Group also actively involved suppliers, OEM and ODM in the quality management process to prevent quality issues at the source. Meanwhile, the Group provided training and assessment to improve their quality control capabilities, and optimised a duo-checking system for raw materials and finished products to identify and eliminate potential quality risks. Furthermore, by optimising quality control and workflow over OEM and ODM, the Group further strengthened its supply chain so as to shorten the production lead time. A strategic mix of in-house and outsourced production was also established to allow enhanced production and replenishment efficiency and maintain cost-leadership. For the year, the respective proportions of self-produced footwear and apparel and procured footwear and apparel were 48.9 percent and 17.0 percent, respectively (2012: 46.0 percent and 15.5 percent).

The Group stands out in the e-commerce market by optimising its webstore interface, improving product descriptions and displays, and establishing a highly efficient and responsive logistics system and after-sale services. The Group launched its e-commerce business in early 2010; in addition to the official online flagship store (Anta.cn), the Group has also engaged in strategic cooperation with the most renowned and well-developed e-commerce platforms in China, namely Tmall.com, JD.com, Taobao.com, Amazon.cn, Paipai.com, Vip.com, etc., so as to strengthen the presence in this emerging high-potential market. The Group’s e-commerce channels aim at providing a convenient and interactive platform to promote its innovative, high-quality and value-for-money products on the Internet. Product launch schedules, priorities and styles on e-commerce platforms are all standardised so as to prevent product cannibalisation and competition between online and offline retailers and to maintain a win-win relationship. The Group also strictly requires online retailers to follow its unified sales policies, and to ensure that their logistics and aftersales services are up to the Group’s standards.

Looking forward, the Group will fully leverage its core strengths, including its strong brand equity, high product differentiation, sound management of retail channels and cost-effective and responsive supply chains, to maintain its leading position in various market segments and to tap the market potential in the long run.

The Group will continue to focus on cost-effectiveness and the synergy between its diverse sports resources and branding strategies to further differentiate its brand among its peers. At the most notable Sochi Winter Olympics and Incheon Asian Games in 2014, the Group will make every effort to provide high-quality outfits for award ceremonies to the CSD and the 16 sponsored China national teams to further enhance its brand differentiation by raising its exposure and strengthening its professional image through all forms of marketing platforms. Moreover, the Group will continue to uphold its brand concept of “Basketball is Priceless” by offering value-for-money basketball products featuring premium functions to customers. More importantly, the addition of prominent NBA all-star player Rajon Rondo and Chandler Parsons makes the Group’s star-studded endorsement lineup more complete. The Group will leverage their strong influence and popularity to boost sales and to stir up a stronger basketball craze in China.

The Group will further implement retail-oriented measures to help retailers improve their retail performance, maximise their profitability, and manage their orders and in-store inventory. The Group will seize opportunities from industry consolidation to open high-efficiency stores at prime locations in high-potential cities in China. The Group expects that there will be total of between 7,700 to 7,800 ANTA stores (including performance-based sportswear series and Sports Lifestyle series), 900 to 1,000 Kids sportswear series stores and 450 to 500 FILA stores in the PRC by the end of 2014. The Group will further optimise in-store POPs and product displays, and expand e-commerce platforms to elevate consumers’ experiences.

The Group will continue to provide comfort and foot protection for people in all age by integrating its advanced technologies such as A-Jelly, A-Silo and A-web into its footwear products. The Group will make best use of the R&D resources to innovate unprecedented functional technologies and apply to apparel products so as to cater different weather conditions. Moreover, more eye-catching FILA collections will be launched through highly-effective publicity campaigns and in-store POP featuring the brand ambassador Shu Qi to showcase FILA’s unique brand image and trendy lifestyle to high-end consumers.

The Group will expand ERP system coverage in retail channels so as to develop products that are in line with the latest market trends, and will formulate the most accurate ordering guides and replenishment forecasts. The Group will also enhance the flexibility and efficiency in replenishment and further shorten the lead time involved. In addition, the cost and quality controls, execution capabilities and production techniques will be strengthened, allowing the Group to meet potential demand with its cost-competitive and market-responsive supply chains.

Mr. Ding Shizhong, Chairman and CEO of ANTA Sports, said, “Although certain sportswear brands’ unresolved issues of excess inventory and deep price cuts are generally expected to bring uncertainty to China’s sportswear industry in the short-term, our fundamentals are strong and our retail-oriented measures have been effective, while continuous positive growth in our future orders on improving profitability and stronger confidence of our retailers has been seen, leading to the recovery of our operational and financial performance. On the other hand, it is generally believed that the ongoing urbanisation, the improvement in livelihoods and the popularisation of sports in China will further drive demand for affordable sportswear with good features. Looking forward, we will leverage our core strengths, including our strong brand equity, highly differentiated products, sound management of retail channels and cost-effective and responsive supply chains to maintain our leading position in various market segments and to tap the market potential in the long run.”

As one of the leading branded sportswear enterprises in China, ANTA Sports Products Limited primarily designs, develops, manufactures and markets sportswear, including sports footwear, apparel and accessories. The Group has an established an extensive distribution network with a leading presence in second and third tier cities in China under the management of regional distributors. The Group places great emphasis on branding by integrating sports resources and sponsorship, advertising and promotional activities and consistent store image to enhance brand and product differentiation. For the past 11 years, its footwear has been enjoying a leading position in China’s composed index on market share.