Amer Sports Oyj lowered its guidance for the second time this year after reporting a 6% decline in net sales in the third quarter to 433.2 million ($595.3 mm) as rapid growth in outdoor footwear and apparel and a solid performance from its ball sports segment were overwhelmed by a shift in winter equipment shipments to the fourth quarter and plummeting consumer sales of fitness equipment. 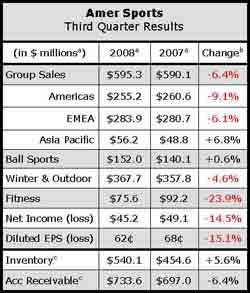 “The third quarter continued to be a rough one,” said company President and CEO Roger Talermo, discussing the period ended Sept. 30. He said the company would have a tough time reaching its goals of 5% organic sales growth and a 10% EBIT level of operating margin. The third quarter is the companys second biggest after the fourth.
The declines come as the company works to reduce its working capital and raise cash to pay down 448 million in short-term debt. The not-so-bad news was that net sales were off just 2% when measured in local currencies. The good news was that Amer expects to more than make up missed ski and boot shipments in the fourth quarter and the companys outdoor brands, Salomon and Arcteryx, continued to grow at a 20%-plus pace.
Company-wide gross profits declined 3% in the quarter to $186.2 million ($281.2 mm). EBIT declined 13% to 51.5 million ($77.8 mm).  The declines came despite the elimination of 568 jobs, or about 8.5% of payroll compared to last year, including 295 jobs in the Americas.
Amer remains highly leveraged, with 629 million ($905.8 mm) in total debt, including 448 million ($645.1 mm) of short term debt, which includes a 75 million ($108 mm) Finnish bond that comes due in May.  The company said it is focused on reducing its gearing ratio, which measures the ratio of debt minus cash and liquid assets to shareholder equity, from 124% to between 60% to 80% “as soon as possible.” To do that it will focus on reducing its working capital.  While the company ended the quarter with inventories valued at 378.4 million ($544.9mm), up 5.6% from a year earlier, it expects inventory levels to fall below last years level by winters end.
“On our agenda for the remaining part of the year, but likewise also so the next few years, it’s clearly to improve our balance sheet,” Talermo said. “It’s very, very important for us to reduce the gearing going forward.”
Amer reduced its full-year guidance for EBIT to between 80 million to 90 million, down from its latest estimate of 90 million to 105 million. Early in the year, Amer projected EBIT of 100 million to 130 million. The latest estimate excludes a capital gain of 13 million from the sale earlier this year of the companys headquarters building.
“I would say the outlook is more uncertain than weve ever had before, just simply because we dont know how consumers are going to react in the month to come, and therefore of course we are more blind, so to say, than before,” Talermo said.
In the companys Ball Sports segment, Racquet Sports net sales rose 7% to 56.7 million ($77.9 mm), Team Sports rose 15% to 38.0 million ($52.2 mm), while Golf fell 5% to 15.9 million ($21.8 mm), due in part to the decision to license the business in Japan and stop making golf balls for the OEM market in the U.S. The company said the Wilson business remained flat in local currency terms over the nine-month period ended Sept. 30, 2008. On a local currency basis, EMEA sales rose 5%, while Asia-Pacific sales fell 13% and sales in the Americas were flat.
Racquet sales were driven by the top-of-the-line K Factor racquet now in its third and last year. Team sports continued to recover from early this year, with help from weak comps in Q3 2007 and “very, very strong” sell-in of baseball products for the 2009 season. EBIT for the ball sports segment improved 27% in local currency terms to 6.6 million ($9.1 mm), but is down 8% for the first nine months to 33.6 million ($51.1 mm).
The real damage was in the Fitness segment, where net sales fell 18% to 55.0 million ($75.6 mm) on a local currency basis due to an unexpected and rapid decline in consumer sales in North America.
Amer Sports said Precor’s commercial business remained solid through the third quarter. The company has not received any order cancellations from the major fitness clubs it ships to directly.
Those clubs account for 58% of segment sales and appear to be moving forward with expansion and renovation plans to gear up for the key New Years season.
Talermo said two trends are hurting the consumer market. First, the decline in housing prices has hurt sales to homes. Secondly, two of the companys dealers have filed bankruptcy and other dealers are also experiencing financial difficulties. In Europe, by contrast, sales to retailers are up 40% this year.
EBIT for the fitness segment plummeted 63% to 2.8 million ($3.8 mm) in the quarter, and dropped 72% for the first nine months. The company plans to cut the workforce at Precors headquarters in Seattle at a cost of a few hundred thousand dollars. Talermo said he does not see the consumer side of the business turning around for “another few years.”

Across the entire Winter and Outdoor segment, EBIT fell 3% in the quarter to 45.7 million ($62.8 mm) in local currency terms, but has swung into the black over the first nine months compared to a 14.3 million ($19.2 mm) loss for the same stretch in 2007. The third quarter decline should reverse itself in the fourth quarter as major shipments go out the door. The company completed a restructuring of the Winter Sports Equipment business, which included the acquisition of a Bulgarian ski vendor in September, that should lead to material improvements in profitability next year.

“The high-season for winter sports equipment shipments to retailers started somewhat later than last year and consequently our sales in local currencies were 13% lower in the quarter compared with last year,” said Talermo. “Thanks to clearly more pre-order deliveries booked for Q4 and as a result of already completed profitability-improving measures, the Winter Sports Equipment business is set to improve its profitability substantially already this year.”

Specifically, the order book for Winter Sports Equipment in the fourth quarter is up 14% from a year ago. Talermo said that reflected a shift in pre-season orders from dealers in the plains states to dealers in mountain resort areas, who typically defer delivery until November. Talermo declined to say whether the business would become profitable this year.

He said the company has not shipped more product than last year, but that more of it is fresh, which has stimulated dealer demand. He called out the high-end Doubledeck ski as having a particularly strong sell-in. Amers ownership of two ski plants, two boot plants and two binding plants, all in Europe, position it to win market share should good snow spur replenishment orders.

Talermo said he thinks the inventory levels at retail are in good shape, especially in the mountain areas. He said that the dealers, regardless of the weather, will take the majority of the orders in the upcoming four weeks.  He also said a 14% decline in pre-season orders and low retail inventories in the U.S. make order cancellations less likely.

“I think there is more open to buy opportunities than cancellation,” said Talermo.

Apparel and footwear sales were propelled primarily by footwear, including solid growth in Central Europe, where Salomon is the fastest growing brand in outdoor footwear. Footwear sell-through by U.S. and European dealers was “solid.” Moreover, pre-orders for Spring 09 are growing at a double-digit pace over last year.

The sell-in of Salomon and Arcteryx products continues to be strong, and pre-orders for spring/summer 2009 are growing at a double-digit pace. Due to the increased costs in Chinese manufacturing, a material part of the sourcing of products is planned to be moved to other Asian countries within the next few years.

The sales decline at Mavic was attributed to supply chain constraints-namely a surge in big OEM orders very late in the third quarter. Mavic was unable to fulfill a few unexpected OEM orders for new product, but it remains profitable. Sports instrument growth was driven by outdoor and training products and could have been better if not for declining sales of dive computers, a business closely tied to declining resort travel.

As Deckers Lays Out Broader Vision for Teva and UGG…