Just a few months after this accomplishment, Schlarb ran the Hardrock Hundred Endurance Run for the first time and won the race with a time of 22:58:28.

Hardrock 100 is a famous trail race with the well-earned nickname of “Wild & Tough.” The race begins and ends in Silverton, CO. Runners loop through a total elevation change of 66,100 feet over 100 miles in the rigorous San Juan mountain range. Add avalanche danger, hypothermia potential and a 30-pound pack on top of navigating tricky terrain on skis, and you’ve got the premise of Schlarb’s adventure.

During four days in March 2016, Schlarb, along with Scott Simmons and Paul Hamilton, skied the Hardrock 100 course while being filmed by Noah Howell. Each day they faced 17 to 29 miles and a range of 8,000 to 11,000 feet of vertical climbs. Schlarb had never competed in the Hardrock 100 race before this ski attempt, so he was forced to navigate the course without prior experience.

“We stayed as true to the course as possible,” said Schlarb. “But sometimes you couldn’t even see the trails and roads…oftentimes we had to take longer to divert around dangerous situations that, in the summer, are not even there on a nice, set trail.”

“This was a team activity, not just a personal challenge,” said Schlarb.“The risk and danger we experienced doesn’t compare to any other project that I’ve ever been involved with. We pushed beyond limits that we feared we could not get through.” 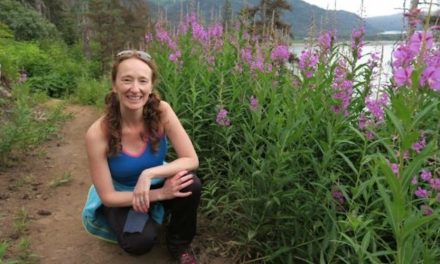