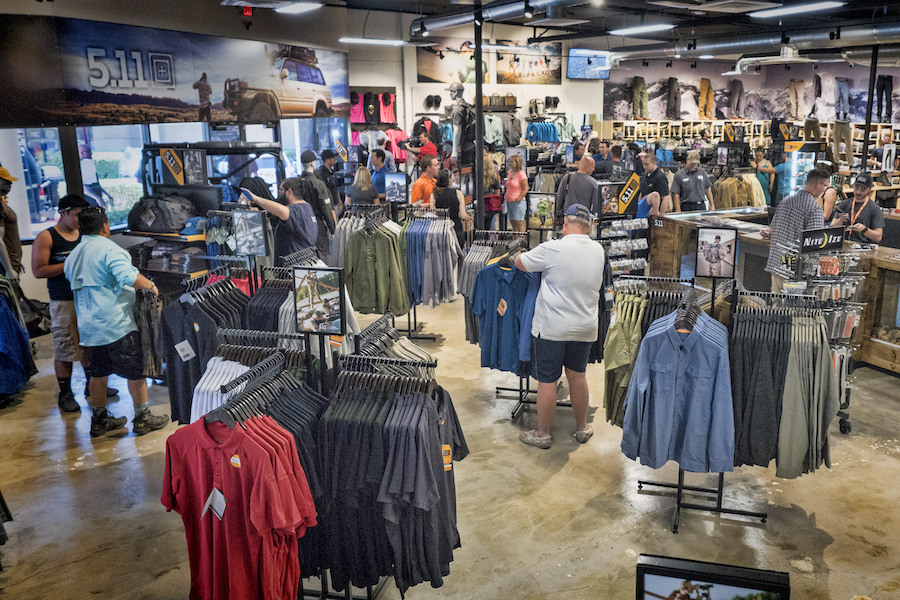 Sears Holdings plans to close another 46 unprofitable stores this year including 13 Kmart and 33 Sears stores.

The United States and China went ahead with tariff hikes on billions of dollars of each other’s automobiles, factory machinery and other goods Thursday in an escalation of a battle over Beijing’s technology policy that companies worry will chill global economic growth.

The Footwear Innovation Summit by FMNII, to be held at Hotel Indigo Los Angeles Downtown on October 2, will bring gather professionals from both technology and footwear sectors to present their latest innovations to 250 industry leaders from footwear brands, design institutes and factories.

Malibu Boats Inc., a manufacturer of recreational fiberglass boats, announced that the company has entered into a definitive agreement with S2 Yachts Inc. to acquire the assets of Pursuit Boats for $100 million.

Flojos on Thursday announced that Jeff Booth has been appointed director of sales at the footwear company.

Work Sharp Outdoor, a manufacturer of knife and tool sharpeners, is in the fourth week of the company’s #WorkSharpStaySharp campaign. The campaign was designed to build engagement around annual Knife Day, which takes place nationwide August 24.

Ski manufacturer Atomic and FIS program Bring Children to the Snow have entered into a partnership to bring the next generation to snow sports.

At the public hearings being held this week in Washington, D.C. over the latest round of proposed tariffs, the American Apparel & Footwear Association (AAFA) reiterated the association’s call for a swift resolution and warned any additional tariffs would harm U.S. workers, companies, consumers and communities.

Several Nike stores in South Africa have been closed after the online circulation of a video featuring an employee’s husband making racist remarks, according to a report from Reuters.

Foot Locker announced the launch of the new “Discover Your Air,” campaign which will serve as the creative platform for all Nike Air product and related content at Foot Locker.

The Outdoor Industry Association has announced the winners of the inaugural Together We Are a Force awards to celebrate the collaborative spirit of the outdoor industry.

Youth on Course—the nonprofit organization providing young people with subsidized golf, college scholarships, paid internships and a caddie program—has partnered with Pinehurst Resort and Country Club to include select golf courses to the company’s portfolio of 900-plus member properties.

REI Co-op is reaffirming the company’s commitment to sustainable, affordable pre-loved gear for customers, with a refreshed used gear website.

Target Corp. reported second-quarter earnings that topped Wall Street’s targets on comparable sales growth of 6.5 percent and traffic growth of 6.4 percent. The discount giant lifted its guidance for the year.

Nike Inc. has been taking a lot of heat on social media for selling a black balaclava that looks “menacing” and could incite gang violence, according to critics.

Hyland’s, a specialist in cramp relief for endurance athletes, is partnering with the Hood To Coast relay, an event that begins on August 24 at the base of Mount Hood and finishes 199 miles later in Seaside, OR.

TRX, the maker of functional training equipment and training content, announced #Made2Move, a new campaign that celebrates the universal beauty of human movement, regardless of body type, shape or size.

Kohl’s Corp. has partnered with Authentic Brands Group, owner of Nine West, to include the lifestyle brand in the company’s brand portfolio.

Seattle-based outdoor apparel and gear manufacturer Outdoor Research has awarded the company’s second annual We Can Grant for $10,000 to The Winnipeg Repair Education and Cycling Hub (WRENCH).

Under Armour launched a new UA Sportstyle category through collaboration with a global team of “Pioneers” who will hold a series of forums designed to empower communities.

Officials from the Sports & Fitness Industry Association (SFIA) and Outdoor Industry Association (OIA) testified in strong opposition to proposed tariffs on Chinese-made sports, fitness and outdoor products. The officials stated that the proposed tariffs would likely raise prices for consumers and lead to job losses while also stressing how essential sports and outdoor products are in supporting healthy and active lifestyles.

Shopify, a provider of e-commerce storefronts, has moved to ban certain firearms and parts on the company’s platform, including some semi-automatic weapons and 3D-printed guns.

London-based luxury online marketplace Farfetch filed for an IPO on Monday and plans to list on the New York Stock Exchange under the ticker FTCH.

Firstaid4sport said the company has recently created a new division, Greestone Distribution, to exclusively sell Mueller products to the sports retail and medical wholesale trade channel in the U.K.

The Trump administration’s consideration of tariffs on Chinese printed circuit assemblies and connected devices would cost the economy $520.8 million and $2.4 billion annually for the 10 percent and 25 percent tariffs, respectively, according to a new study commissioned by the Consumer Technology Association (CTA).

The Dick’s Sporting Goods Foundation on Monday announced that the foundation would fully fund all baseball and softball Sports Matter projects currently on DonorsChoose.org.

Escalade Inc. reported sales in the second were slightly down to unseasonal spring weather but profits benefited from the sale of Stiga AB.

Alabama A&M’s athletic department has joined an apparel partnership with Nike and BSN that begins during the 2018-19 athletic seasons.

Agenda and Liberty Fairs announced plans to move out of the Sands Expo and Convention Center on the Las Vegas Strip to downtown Las Vegas, starting in February 2019.

United Legwear & Apparel Co. announced a new partnership with Epic Games to create a range of Fortnite bags and accessories, in a deal brokered by IMG.

The CEO of Peak Performance, Nicolas Warchalowski, has chosen to leave his assignment at his own request after the successful acquisition transaction with Amer Sports.