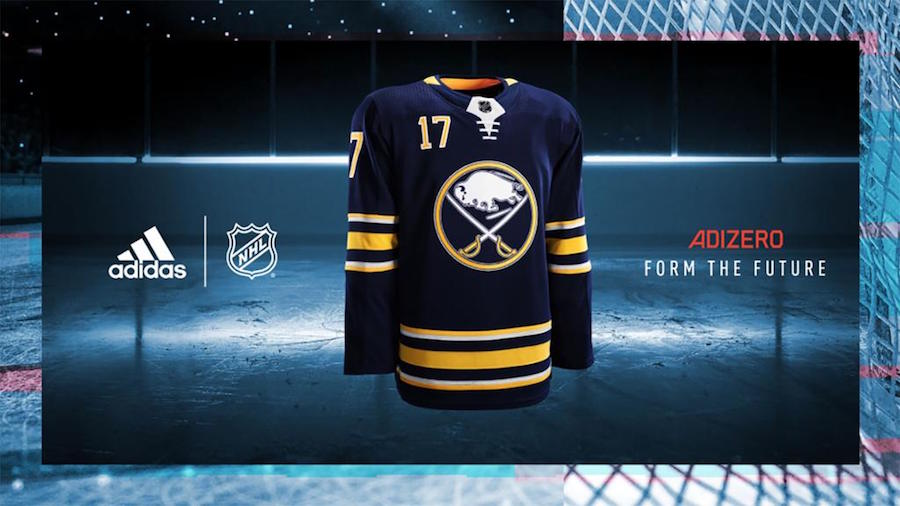 On Tuesday night in Las Vegas, Adidas and the NHL unveiled its new Adizero Authentic NHL jerseys. In September 2015, Adidas announced a seven-year partnership to replace Reebok as the official outfitter of on-ice uniforms and official supplier of licensed apparel and headwear for the league starting with the 2017/18 season.

The new uniforms are designed to take the hockey jersey silhouette “to the next level by redefining fit, feel and lightweight construction,” said an Adidas representative.

“Specifically created for elite performance, we’ve designed the Adizero Authentic NHL jerseys to deliver advanced innovation and technical design for the world’s best hockey players,” said Dan Near, head of Adidas Hockey. “We build products for the creator athlete. Our mission is to help athletes perform better and we look forward to making our on-ice debut this season with the new Lighter, Cooler, and Stronger Adidas Hockey Adizero Authentic NHL jerseys.”

“We’re excited for the fans and players to see the innovation and performance features that Adidas put into creating the new jerseys,” said Brian Jennings, NHL chief brand officer and executive vice president. “To play at their highest levels, the game’s greatest players require the best technology and design available, and these Adidas jerseys set a new benchmark for performance gear.”

“Adidas is a brand recognized worldwide for innovation and technology investment, creating constant innovation in high performance apparel,” said NHLPA chief of global business strategies Sandra Monteiro. “The Players are excited to partner with Adidas, creating a new milestone in hockey apparel, bringing edge, innovation and premium design to the game, specifically focused on their performance.”

Rapper, singer, producer and songwriter Desiigner, comedian Russell Peters, Adidas ambassadors Connor McDavid and Patrice Bergeron, as well as a number of NHL athletes nominated for awards, were on hand to celebrate the launch.

• Featuring new cresting materials and construction technology, the jersey reduces crest weight by up to 46 percent, while a single-layer perforated numbering system reduces number weight by up to 60 percent, in order to deliver a new jersey that is up to 19 percent lighter when compared to the current NHL Jersey.

• The jersey features Adidas Clima technology in each of the jersey fabrics for breathability and performance. Combining moisture management technology and a streamlined silhouette to maximize air flow circulation with materials that are up to 133 percent more permeable than fabrics currently used on ice allows athletes to be cooler.

• The jersey’s fabrics are up to 27 percent stronger in burst testing and up to 72 percent tougher in abrasion testing compared to the current NHL jersey.