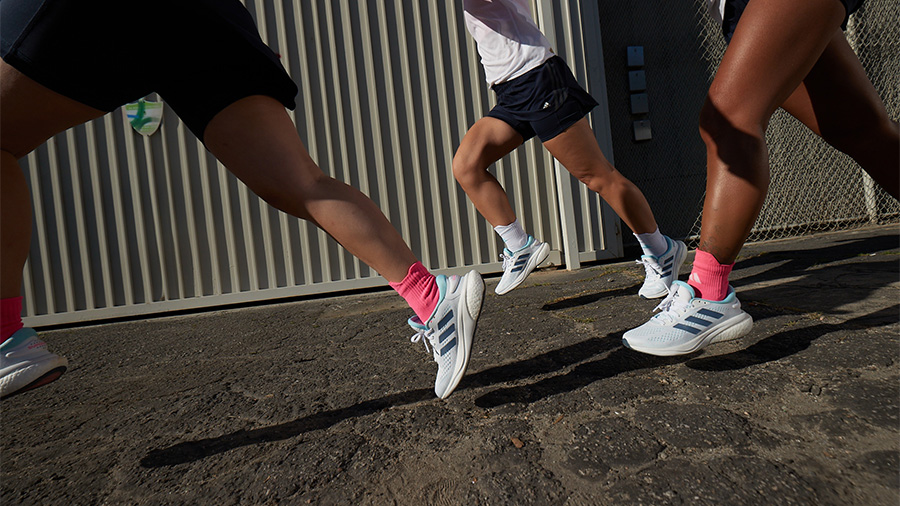 Adidas AG reported second-quarter results that were somewhat ahead of expectations reflecting continued strong momentum in Western markets and a return to growth in Asia-Pacific. However,  a slower-than-expected recovery in Greater China led to a significant reduction in guidance for the year. Results were in line with preliminary results issued on July 26.

“Our Western markets continued to show strong momentum in the second quarter amid heightened macroeconomic uncertainty. With Asia-Pacific returning to growth, markets combined representing more than 85 percent of our business grew at a double-digit rate,” said Adidas CEO Kasper Rorsted. “With sports back at center stage this summer, revenues in our strategic growth categories Football, Running and Outdoor all increased by double-digits; however, the macroeconomic environment, particularly in China, remains challenging. The recovery in this market is, due to continued COVID-19-related restrictions, slower than expected, and we have to take into account a potential slowdown in consumer spending in all other markets for the remainder of the year.”

Currency-Neutral Revenues Increase 4 Percent Despite Macroeconomic Constraints
In the second quarter, currency-neutral revenues increased 4 percent as Adidas continued to see strong momentum in Western markets. This growth was achieved despite continued challenges in both supply and demand. Supply chain constraints as a result of last year’s lockdowns in Vietnam reduced top-line growth by around €200 million in Q2 2022. In addition, the company’s decision to suspend its operations in Russia reduced revenues by more than €100 million during the quarter. Continued covid-19-related lockdowns in Greater China also weighed on the top-line development in Q2. From a channel perspective, the top-line increase was to a similar extent driven by the company’s own direct-to-consumer (DTC) activities as well as increases in wholesale. Within DTC, e-commerce, which now represents more than 20 percent of the company’s total business, showed double-digit growth reflecting strong product sell-through. From a category perspective, revenue development was strongest in the company’s strategic growth categories Football, Running and Outdoor, which all grew at strong double-digit rates. In euro terms, revenues grew 10 percent to €5.596 billion in the second quarter (2021: €5.077 billion).

Strong Demand In Western markets
Revenue growth in the second quarter was driven by Western markets despite last year’s lockdowns in Vietnam still reducing sales, particularly in EMEA and North America, by €200 million in total. In addition, the top-line development in EMEA was also impacted by the loss of revenue in Russia/CIS of more than €100 million. Nevertheless, currency-neutral sales grew 7 percent in the region. Revenues in North America increased 21 percent during the quarter driven by growth of more than 20 percent in both DTC and wholesale. Revenues in Latin America increased 37 percent, while Asia-Pacific returned to growth. Currency-neutral revenues increased 3 percent in this market despite still being impacted by limited tourism activity in the region. In contrast, the company continued to face a challenging market environment in Greater China, mainly related to the continued broad-based covid-19-related restrictions. As a result, currency-neutral revenues in the market declined 35 percent during the three-month period, in line with previous expectations. Excluding Greater China, currency-neutral revenues in the company’s other markets combined grew 14 percent in Q2.

Operating Profit Of €392 million Reflects Operating Margin Of 7.0 percent
The company’s gross margin declined 1.5 percentage points to 50.3 percent (2021: 51.8 percent). Significantly higher supply chain costs and a less favorable market mix due to the significant sales decline in Greater China weighed on the gross margin development. This could only be partly offset by a higher share of full-price sales, first price increases and the benefits from currency fluctuations. Other operating expenses were up 19 percent to €2.501 billion (2021: €2.107 billion). As a percentage of sales, other operating expenses increased 3.2 percentage points to 44.7 percent (2021: 41.5 percent). Marketing and point-of-sale expenses grew 8 percent to €663 million (2021: €616 million). The company continued to prioritize investments into the launch of new products such as Adidas’ latest Sportswear collection, the next iteration of its successful Supernova running franchise and first drops related to the Gucci collaboration as well as campaigns around major events like ‘Run for the Oceans.’ As a percentage of sales, marketing and point-of-sale expenses were down 0.3 percentage points to 11.8 percent (2021: 12.1 percent). Operating overhead expenses increased by 23 percent to a level of €1.838 billion (2021: €1.492 billion). This increase was driven by Adidas’ continuous investments into DTC, its digital capabilities and the company’s logistics infrastructure as well as by unfavorable currency fluctuations. As a percentage of sales, operating overhead expenses increased 3.5 percentage points to 32.8 percent (2021: 29.4 percent). The company’s operating profit reached a level of €392 million (2021: €543 million), resulting in an operating margin of 7.0 percent (2021: 10.7 percent).

Net Income From Continuing Operations Reaches €360 million
The company’s net income from continuing operations slightly declined to €360 million (2021: €387 million). This result was supported by a one-time tax benefit of more than €100 million due to the reversal of a prior year’s provision. Consequently, basic EPS from continuing operations reached €1.88 (2021: €1.93) during the quarter.

Currency-Neutral Revenues On Prior-Year Level In First Half Of 2022
In the first half of 2022, currency-neutral revenues were flat versus the prior year period. In euro terms, revenues grew 5 percent to €10.897 billion in the first six months of 2022 (2021: €10.345 billion). The company’s gross margin declined 1.7 percentage points to 50.1 percent (2021: 51.8 percent) during the first half of the year. While price increases, as well as positive exchange rate effects, benefited the gross margin, these developments were more than offset by the less favorable market mix and significantly higher supply chain costs. Other operating expenses increased to €4.759 billion (2021: €4.154 billion) in the first half of the year and were up 3.5 percentage points to 43.7 percent (2021: 40.2 percent) as a percentage of sales. Adidas generated an operating profit of €828 million (2021: €1.248 billion) during the first six months of the year, resulting in an operating margin of 7.6 percent (2021: 12.1 percent). Net income from continuing operations reached €671 million, reflecting a decline of €219 million compared to the prior year’s level (2021: €890 million). Accordingly, basic earnings per share from continuing operations declined to €3.47 (2021: €4.52).

Average Operating Working Capital, As A Percent Of Sales Decreases Slightly
Inventories increased 35 percent to €5.483 billion (2021: €4.054 billion) at June 30, 2022 in anticipation of strong revenue growth during the second half of the year. Longer lead times, as well as the challenging market environment in Greater China, also contributed to the increase. On a currency-neutral basis, inventories were up 28 percent. Operating working capital increased 23 percent to €5.191 billion (2021: €4.213 billion). On a currency-neutral basis, operating working capital was up 14 percent. Average operating working capital as a percentage of sales decreased 0.4 percentage points to 21.0 percent (2021: 21.4 percent), reflecting an over-proportional increase in accounts payable due to higher sourcing volumes and product costs.

FY 2022 Outlook Reflects Double-Digit Growth In Second Half Of Year
On July 26, Adidas adjusted its guidance for FY 2022 due to the slower-than-expected recovery in Greater China since the start of the third quarter resulting from continued widespread covid-19-related restrictions. Adidas now expects currency-neutral revenues for the total company to grow at a mid- to high-single-digit rate in 2022 (previously: at the lower end of the 11 percent to 13 percent range), reflecting a double-digit decline in Greater China (previously: significant decline). While so far the company did not experience a meaningful slowdown in the sell-through of its products or significant cancellations of wholesale orders in any market other than Greater China, the adjusted guidance also accounts for a potential slowdown of consumer spending in those markets during the second half of the year as a result of the more challenging macroeconomic conditions. Therefore, growth in EMEA is now expected to be in the low teens (previously: mid-teens growth), while revenues in Asia-Pacific are projected to grow at a high-single-digit rate (previously: mid-teens growth). Despite the more conservative view on the development of consumer spending in the second half of the year, Adidas has increased its forecasts for North America and Latin America reflecting the strong momentum the brand is enjoying in these markets. In North America, currency-neutral revenues are now expected to increase in the high teens. Sales in Latin America are projected to grow between 30 percent and 40 percent (both previously: mid- to high-teens growth).