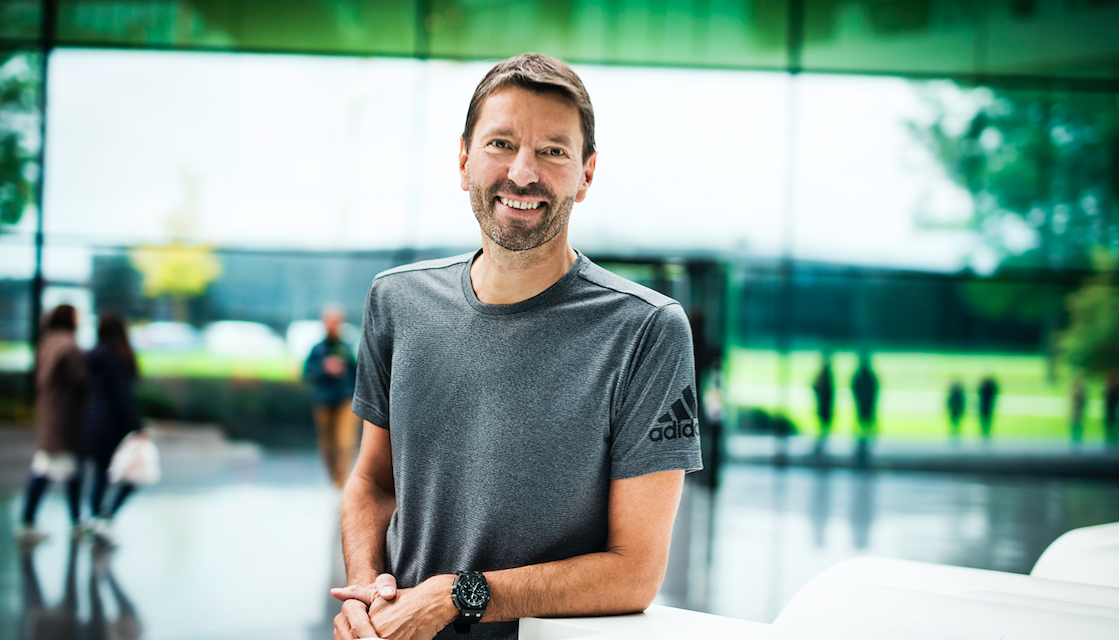 In an interview Tuesday on CNBC, Adidas CEO Kasper Rorsted admitted that Nike has improved its competitive positioning in the U.S. marketplace but he said the Adidas Brand is still gobbling up share in the region. Said Rorsted, “For the third year in a row, there’s no doubt that we are taking share in America.”

He noted that sales for the Adidas Brand for the first six months were up more than 20 percent while the overall market is likely expanding in the range of 3 to 5 percent.

Asked about the impact of Nike’s resurgence, Rorsted noted that Adidas is “predominantly” feeling Nike’s improvement in the U.S. market while also stressing that Adidas is expanding at a faster rate. Said Rorsted, “We have still outgrown Nike, on a global basis but also in the U.S., but there is no doubt that Nike is coming back.”

Combined sales of the Adidas and Reebok brands in the North America region on a currency-neutral basis were ahead 15.6 percent in the second quarter ended June 30 and ahead 18.2 percent in the six months.

North America revenues for Nike Brand grew 6 percent on a currency-neutral basis in the first quarter ended August 31 that’s been largely credited to improved innovation. Nike’s sales in the region climbed 3 percent in the fiscal fourth quarter, the first gain in four quarters.

Similarly asked if Adidas Brand is feeling any pressures from some pickup in sales at Under Armour, Rorsted noted that Under Armour is still seeing single-digit growth “and we are outgrowing them in pretty much every single market in the world right now.”

Rorsted was also asked about conditions in Europe and China as well as the potential impact of U.S. tariffs on Chinese goods.

On Europe, Rorsted said the region saw 5 percent growth for Adidas in the first quarter before slowing in the second quarter and he reiterated that the company now expects flat growth in the back half due to a “somewhat subdued consumer” in the European marketplace, in part related to concerns over Brexit.

“I think that Brexit is probably the most unwise economic position Europe has taken in the last 20 years, along with the UK,” said Rorsted. “There’s no doubt that the consumer will be impacted and the economy will be impacted in the UK, in Europe for all businesses, including ours. So we of course are setting up separate warehousing, doing more in hedging. But it is just not a very good financial position made by Brussels and London.”

He said Adidas has already felt the impact over the last two years due to the devaluation of the British pound but that will worsen should the deal become effective. Said Rorsted, “Europe is a big exporter to the UK and of course, Europe will suffer – continental Europe — with what’s coming, and the same for the UK with exports to Europe. So it is not good for business in Europe.”

On China, Rorsted said Adidas hasn’t felt any impact from the slowdown of that economy. Sales in the first six months ran ahead 25 percent in China on top of growth of 30 percent last year.

Rorsted said, “China continues to be very, very hot for us. And you know, we are optimistic for the future also in China. So really in the three key markets, U.S., growing at 20 percent, China grows 25 percent, and online growing 30 percent. And that picture, we see remaining for the future. Maybe not with the same growth rates, but still very, very strong for all three markets.”

Asked about the potential impact of U.S. tariffs on China, Rorsted said Adidas won’t be impacted because most of the manufacturing that Adidas does in China is produced for that market. Factories in in Vietnam and Indonesia produce for the rest of the world.

He said, “For us, it won’t have an impact. But there’s no doubt there are certain companies that have a very large manufacturing volume coming out of China and they will be impacted.”

Asked if the U.S. will experience higher footwear prices should the next threatened round of tariffs go through, Rorsted said, “I think maybe in the short term, but not in the medium term, and medium is within a year. I don’t think it’s going to have a huge impact, if it’s only China. Of course, if it’s impacting all of Asia, it will. But only China, it will have hardly an impact.”

Asked where the Adidas Brand is seeing strength, Rorsted cited pop-inspired footwear, such as Yeezy products from Kanye West; 3D-printed shoes; and its Parley sustainability collection.

He said Kanye West continues to be strong ambassador for the brand despite a number of controversies, including his support of President Donald Trump. West is meeting with the president for dinner on Thursday. Said Rorsted, “You know, when you work with a creator like Kanye West, you don’t get mainstream. And we have been extremely happy with our relationship with Kanye West. I’m meeting him Wednesday night for dinner. He is a fantastic ambassador for the company and he still will be.”

Rorsted also commended Nike’s ad use of Colin Kaepernick as the face of its “Just Do It” anniversary campaign. He said he believes it’s important for brands to have a “have a point of view” and said Adidas seeks to stand out in different ways. Said Rorsted, “I think uniting people is significantly important. I think it was a good move they made. We have a different view but we think it was a good view they had. We think that the more you can unite people through sport, the better it is. We need to unite a society, not separate a society.”

He also believes overall growth in the athleisure category is far from over. Rorsted stated, “I don’t think it has peaked, and I don’t think it’s peaking for a long time. Because the trend towards much more comfortable wear, athleisure wear, even here will come – the fight against obesity. So there is no doubt that sporting goods will continue to grow and outgrow the overall economy. That’s our perception.”

The full interview is here.