Adidas And Under Armour Recognized At ESPN’s Sports Humanitarian Awards 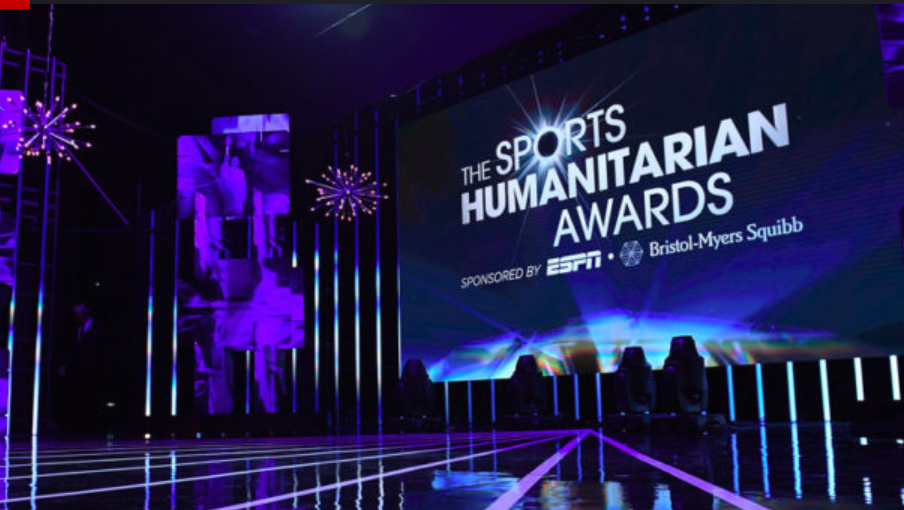 Adidas won the first Sports Sustainability Leadership Award while Under Armour was named the winner of the Corporate Community Impact Award at the fifth annual Sports Humanitarian Awards presented by ESPN and sponsored by Bristol-Myers Squibb Company.

The awards were handed out at L.A. LIVE’s The Novo, Tuesday, July 9, to celebrate those who have used the power of sports to make a positive impact on society.

This year’s winners include (see below for descriptions on each award):

“Cancer research is advancing at an incredible pace, but we need to do more to ensure each person who is diagnosed with cancer is able to receive the best possible care,” said Susan Sweeney, President and Head, U.S. Commercial, Bristol-Myers Squibb. “We’re proud to support the Stuart Scott Memorial Cancer Research Fund at the V Foundation, which is making great progress in its goal to improve outcomes for underserved cancer patients.”

ESPN will showcase highlights from the Sports Humanitarian Awards on Thursday, July 18, during a special one-hour program at 7 p.m. ET.

MUHAMMAD ALI SPORTS HUMANITARIAN AWARD
The Muhammad Ali Sports Humanitarian Award is given to an athlete whose continuous, demonstrated leadership has created a measured positive impact on their community through sports.

Chris Long was honored with the Muhammad Ali Sports Humanitarian Award for his commitment to giving back through strategic, multifaceted efforts, which attack larger systematic issues. He donated his entire salary in 2017 to benefit educational equality and encouraged his fans to join him in the effort. The “Pledge 10 for Tomorrow” effort raised $1.75 million to support the three cities in which he spent his NFL career: St. Louis, Boston and Philadelphia. Not content with just giving money, the 2018 Walter Payton NFL Man of the Year has consistently matched his financial donations with boots on the ground efforts. His Waterboys initiative has helped more than 225,000 people in East Africa gain access to clean drinking water by building more than 61 water wells to date. Long’s ability to inspire and help other athletes get involved with his causes has led to 26 NFL players from more than 20 different teams participating in Waterboys. The program also has recently expanded into the NBA with the creation of Hoops2o.

LEAGUE HUMANITARIAN OF THE YEAR AWARD
The League Humanitarian Leadership Award honors a professional sports league for driving social impact by using all of its systematic resources.

The National Hockey League was recognized with the League Humanitarian Leadership Award for their efforts to create the most inclusive experience for the entire hockey community. The NHL is the architect of hockey’s Declaration of Principles — a joint commitment supported by 17 hockey organizations from around the world serving professionals and amateurs — to promote, inspire and effectuate positive changes in the hockey experience for all players and their families. In partnership with the National Hockey League Players’ Association, the NHL developed an on-ice Learn to Play initiative — which has introduced more than 50,000 children to ice hockey at low to no-costs since 2015 — and Future Goals Hockey Scholar — a STEM-based, hockey-themed digital learning platform with a reported 84% increase in understanding of science and math principles. The NHL’s Hockey is for Everyone initiative includes both a year-round campaign to recognize and celebrate non-traditional audiences and a support system for 26 affiliated nonprofit hockey organizations across North America that offer underprivileged and disadvantaged children an opportunity to play hockey. These programs reach 8,000 children a year and leverage the sport to build character, foster positive values and develop important life skills. The League’s environmental stewardship remains unsurpassed as it counterbalanced 100% of its energy needs for three consecutive years, launched a first-of-its-kind water restoration program, and offset the carbon footprint for air travel during the 2019 NHL Stanley Cup Playoffs.

SPORTS SUSTAINABILITY LEADERSHIP AWARD
The Sports Sustainability Leadership Award recognizes an organization that is leveraging the power of sports to make a positive impact on the environment.

By 2050, there will be more plastic than fish in the oceans. adidas is driving eco-innovation around materials, products and new ways of using them, turning a threat into a thread. They are working with Parley for The Oceans, which creates material from upcycled plastic waste that is intercepted on beaches and in coastal communities before it gets to the ocean. The adidas x Parley line is made with this innovative yarn, transforming the plastics into jerseys, shoes and other into high performance sportswear. Five million pairs of Parley shoes were produced in 2018, with plans to produce 11 million pairs of shoes containing recycled ocean plastic by the end of 2019. Additionally, Adidas works to educate consumers about the importance of the oceans, the problem of plastic pollution in the oceans, and the ways to eliminate unnecessary virgin plastic from people’s lives. In manufacturing, adidas focuses on using sustainable materials, cutting CO2 emissions and waste prevention.

For their work in addressing the public school student drop-out rate in Chicago, the Chicago Fire Soccer Club was crowned the Sports Humanitarian Team of the Year. More than 40% of public school students in Chicago do not graduate high school, and nearly 70 students drop out of school every day. Through an innovative after-school soccer program called P.L.A.Y.S. (Participate, Learn, Achieve, Youth, Soccer), the Chicago Fire Soccer Club offers a 10-week program that integrates soccer with social and emotional learning character skills, while striving to improve participants’ academic performance and providing a safe and supportive environment to engage in soccer. P.L.A.Y.S. participants have had a decrease in behavior infractions, number of disciplinary incidents, unexcused absences, suspensions and failing grades. Ultimately, the program has led to a 50% drop in crime near its spaces, a significant feat given that 60% of P.L.A.Y.S. schools were in the top-20 most violent neighborhoods in Chicago.

CORPORATE COMMUNITY IMPACT AWARD
The Corporate Community Impact Award recognizes a corporation that utilizes their business platform and the power of sports to help advance a social issue, cause or community organization.

Under Armour was named the winner of the Corporate Community Impact Award for creating Building Bridges Through Basketball with the NBA and RISE. The 10-week programs in Chicago, Charlotte and Los Angeles brings together youth, coaches and local law enforcement that combines on-court training with an interactive curriculum exploring topics ranging from identity and diversity to empathy and respect. The experience creates space for participants to have candid conversations, build trust-based relationships, have fun playing basketball and become leaders in their community. This partnership with NBA Voices is one of UA’s #WEWILL initiatives focused on working with communities to provide opportunities through sport. From building and renovating hundreds of sports facilities in cities around the world to supporting leadership training and sports programming for millions of students, UA is committed to unlocking kids’ potential, while inspiring and uplifting our hometowns.

The Billie Jean King Youth Leadership Award celebrates and honors youth who are using the power of sport as a catalyst for change and making a positive impact on society.

Harrison understands what it means to feel different. When he was just a toddler, he was diagnosed with Sensory Processing Dysfunction and Asperger’s Syndrome. Athletic by nature, Harrison struggled to find an outlet for his boundless energy, but team sports did not work for him. When he was 12, he discovered BMX and off road bike racing, and everything clicked into place. By finding his focus and using his bike as a coping mechanism, Harrison realized that biking could help other kids with challenges, some visible, some not. He founded GearUp in 2015, which helps kids, especially those with special needs, to learn to ride safely, access to safe riding spaces, work with mentors, and free bikes. Since its been operational, Harrison and Gear Up have facilitated more than 9,000 hours of mentored riding for kids with special needs. To date, more than 4,500 children have been directly impacted by GearUp programming.

Parks was a standout on the track team at her high school in Atlanta, but after moving to New York City, she doesn’t compete anymore. It’s not that she doesn’t want to, it’s that her high school, Urban Assembly Bronx Academy of Letters, doesn’t offer the sport. Nor does it offer boys volleyball, the game that Diaz grew up playing during summers spent in Puerto Rico. Parks and Diaz say that too many students like them don’t get the chance to play sports in New York City schools. That’s why they are leaders in the Fair Play coalition, designed to create equitable access to school sports in NYC. They’ve also been part of a class action lawsuit accusing the education department and the Public School Athletic League of discrimination by denying African-American and Hispanic students an equal opportunity to play on school teams. Their efforts have paid off — on May 29, 2019, the NY City Council unanimously passed the Intro 242-B bill, designed to address inequities in high school sports for Black and Latino students.

Sanchez strives to create positive pathways to engage youth, helping them grow physically and mentally into their early adulthood. She is leading the design, implementation and management of a free, 5-week summer program, Soccer Bloc, through New York City Football Club’s Youth Leadership Council. Soccer Bloc uses soccer to connect over 500 young people from different communities across the five boroughs. The program employees 50 teenagers, and each week they implement a curricula focused on different social topics including, diversity and inclusion, healthy lifestyles, safety awareness, self-identity and leadership — all through the lens of soccer. Additionally, through a partnership with the Manhattan District Attorney’s Office, Sanchez is working to expand Saturday Night Lights, a violence prevention and youth development program, to the same zones as Soccer Bloc.

In honor of former ESPN commentator Stuart Scott, this award celebrates individuals that have taken risks and used an innovative approach to helping the disadvantaged through the power of sports.

Khalifeh, a Taekwondo champion with 20 gold medals under her belt from national and international competitions, saw first-hand that women in her home country of Jordan, and all over the Middle East, were experiencing high levels of domestic violence. She created SheFighter, the first women’s-only, self-defense school in the Middle East, to empower women both physically and psychologically through martial arts. Since its inception in 2012, Khalifeh has trained more than 18,000 women globally, as well as 4,000 Syrian refugees, has grown to studios in over 35 countries, as she works with women all over the world to learn self-defense and inspires them to take on active roles in society.

Trent, the legendary Purdue fan’s story of courage and hope inspired and captivated a nation throughout his battle with the rare bone cancer osteosarcoma. Relentless in his battle, he never allowed cancer to prevent him from living out his dreams in sports journalism and serving others. He spent the final days of his life at home in hospice care, but Trent was committed to sharing his story to raise money to eradicate the disease and improve the lives of others who face a similar battle. The Indiana native rose to national recognition and befriended many members of the sports industry, using his new platform to encourage fans to donate to cancer research -– raising more than $2.2 million for Purdue University, the Riley Hospital for Children at Indiana University Health and the V Foundation.