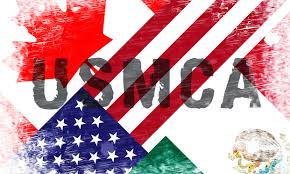 “The USMCA is a win for the textile, apparel, and footwear industry, as it provides businesses with certainty to support supply chain operations that employ hundreds of thousands of Americans,” said Steve Lamar, president and CEO of the American Apparel & Footwear Association. “When negotiations began, AAFA asked for three things – that the new agreement remain trilateral, that it not harm the industry’s supply chains, and that it be seamlessly implemented. Thank you to the Administration and Congress for reflecting each of these requests in the final deal, for approving the agreement with a bipartisan majority, and for working around the clock to ensure tomorrow’s successful launch.

“With the USMCA entering into force, American businesses are excited to continue to work with supply chains in the North American region. Allowing the agreement to provide structure and avoiding the imposition of unnecessary trade barriers, such as punitive tariffs, will be essential for these American businesses and the American workforce to succeed and prosper under the agreement. Ensuring predictability and lowering trade barriers are always important, but even more so now, as we recover from and safely restart our economy in light of COVID-19.”