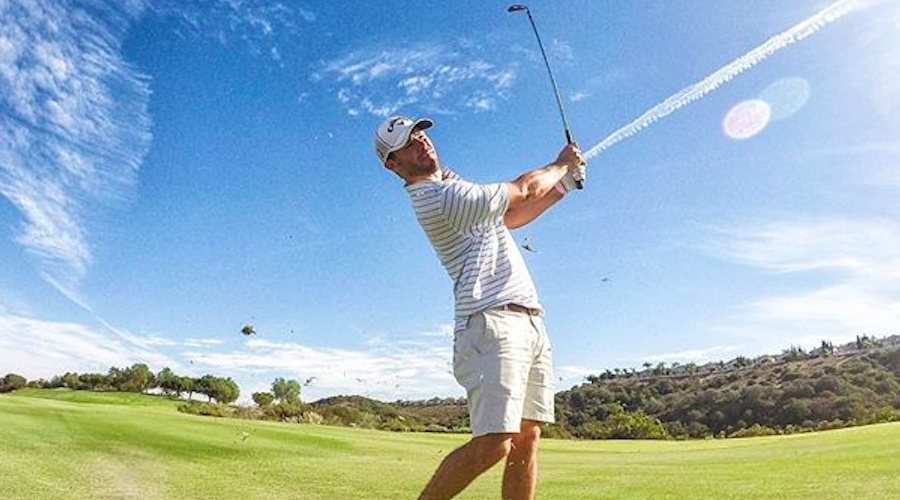 Callaway Golf Company lifted its guidance for the full year after reporting that improved sales led to a lower-than-expected loss for the third quarter.

The quarter was marked by a 6.9 percent increase in net sales, continued benefits from its operational improvements and a net loss of 6 cents per share.

The company generally reports a net loss in the third quarter due to the seasonality of its business, but the company had expected a net loss of 15 cents to 10 cents as a result of a planned increase in operating expenses in the third quarter of 2016 compared to 2015. The increased sales, however, offset the increased expenses. These results reflect the company’s continued brand strength and additional hardgoods market share gains, as well as the commencement of the company’s joint venture in Japan in the third quarter of 2016. The results allowed the company to narrow its 2016 full-year net sales guidance to the high end of the range, to $870 million to $880 million, and increase its 2016 full-year earnings guidance to 50 cents to 54 cents a share.

“We were pleased to see our continued momentum in the marketplace in the third quarter,” commented Chip Brewer, president and chief executive officer of Callaway Golf Company. “Despite industry headwinds and softer than expected market conditions, we grew our net sales in the third quarter. We also continued to realize benefits from the comprehensive strategic initiatives we undertook during the last three years, including working capital improvements and the extension of product life cycles, with gross margins improving 110 basis points year to date and cash generated from operating activities increasing over 200 percent to $86 million for the first nine months of 2016 compared to the same period in 2015.”

Brewer continued, “I am confident we are on track to create long-term shareholder value through our improved core business as well as future growth from strategic ventures within golf or in areas tangential to the golf equipment business. For instance, during the third quarter, we acquired Toulon Design and hired its founder, Sean Toulon, to run our putter business. I couldn’t be more excited about the opportunity to expand the Odyssey brand as we extend our reach further into the super-premium putter category through Toulon Design by Odyssey. We are also re-investing in the future of our golf ball business via further investment in R&D and today’s announced hiring of Rock Ishii, former Sr. Director of Golf Ball Innovation at Nike. Looking forward, we will continue to opportunistically seek new strategic growth platforms and strategic high return investments in our core business. We will also continue to strengthen our core business through disciplined operational execution and the introduction of technologically advanced products. We are very excited about our product line for 2017.”

Summary Of Third Quarter 2016 Financial Results
For the third quarter of 2016, Callaway announced the following GAAP financial results, as compared to the same period in 2015 (in millions, except EPS): 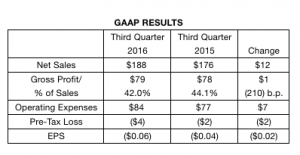 Despite softer than expected market conditions, the company’s 2016 third quarter net sales increased $12 million to $188 million, as compared to $176 million in the third quarter of 2015. The higher sales were driven primarily by increased sales in the irons and golf ball categories, sales from the company’s new joint venture in Japan, and a net overall positive $5.6 million impact from changes in foreign currency rates. The increase in net sales helped offset the 210 basis point decrease in gross margins and the $7 million year-over-year increase in operating expenses. The decrease in gross margin was primarily attributable to product launch timing resulting in sales of higher margin products for the third quarter of 2015 as compared to 2016. Full year 2016 gross margins are still expected to increase over 200 basis points compared to 2015. The increase in operating expenses in the third quarter of 2016 was due to incremental expenses related to the Japan joint venture, a planned shift in the timing of marketing expenses, and an increase in bad debt expense.

Summary Of First Nine Months 2016 Financial Results
For the first nine months of 2016, Callaway announced the following GAAP financial results, as compared to the same period in 2015 (in millions, except EPS): 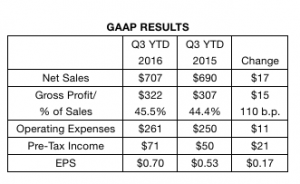 The company’s $707 million in net sales for the first nine months of 2016 increased by 2.5 percent compared to the first nine months of 2015. Similar to the third quarter, this increase was driven primarily by increased sales in the irons and golf ball categories, sales from the company’s new joint venture in Japan, and a net overall positive $5.6 million impact from changes in foreign currency rates. This increase in net sales, together with a 110 basis point improvement in gross margin, more than offset the $11 million increase in operating expenses. The increase in operating expenses was primarily attributable to a planned increase in marketing expense, an increase in bad debt expense, and incremental expense related to the new Japan joint venture.

Business Outlook For 2016
Given the company’s financial performance during the third quarter, the company is revising and increasing its overall guidance as follows:

The company’s updated guidance is based on current foreign currency exchange rates. If the foreign currency rates were to weaken significantly against the U.S. Dollar during the fourth quarter of the year, the company’s financial results would be adversely affected. The company’s pre-tax income and earnings per share estimates for the full year 2016 include the $18 million gain (18 cents per share) on the second quarter sale of a portion of its Topgolf investment. The company’s estimate for its full year 2016 earnings per share assumes a base of 95 million shares as compared to 85 million shares in 2015. The increased share count in 2016 is primarily the result of the conversion of the company’s convertible debt into equity in 2015. This estimate includes taxes of approximately $6 million. 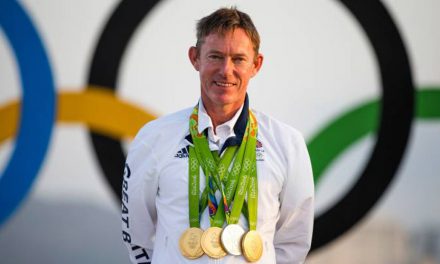