Brunswick Corp. reported earnings rose 32 percent on an adjusted basis in the fourth quarter. Sales grew 5.7 percent as a 18.6 percent gain in the marine segment offset a 5.6 percent decline in the fitness segment.

“Our combined marine portfolio had a fantastic 2018, which led to the company’s ninth consecutive year of adjusted EPS growth,” said Brunswick Chief Executive Officer David Foulkes. “The financial results demonstrate the outstanding execution of our marine strategy, where our focus on product and technology leadership, along with capacity investments and operational excellence, generated strong improvements. We leveraged our successful performance in a steady marine market into significant top-line growth, margin expansion, and record earnings,” Foulkes continued.

“In the fourth quarter, Mercury’s propulsion business continued to excel behind powerful demand for new outboard products, which generated 20 percent revenue growth in the quarter. The parts and accessories business, which was augmented by the first full quarter of results from the Power Products acquisition, also delivered impressive topline and earnings growth. In addition, the boat business achieved solid earnings improvements, led by healthy growth in Boston Whaler, Harris pontoons, and Sea Ray Sport Boats and Cruisers. Finally, our Fitness business continues to work through the separation process, and reported top-line and gross margin outcomes relatively consistent with our expectations for the quarter,” Foulkes continued.

“As I step into my new role as CEO, I am looking forward to executing against our strategic objectives and leading the company and our over 15,000 dedicated employees to even greater success in 2019 and beyond,” Foulkes concluded.

As a result of the June 25, 2018 announcement regarding Sea Ray, the results of the entire Sea Ray business are again being reported in continuing operations for GAAP purposes. However, as adjusted, non-GAAP results exclude the Sea Ray Sport Yacht and Yacht operations that are being wound down. Therefore, for all periods presented in this release, all figures and outlook statements incorporate these changes unless otherwise noted. For more information, please see the Form 8-K dated July 19, 2018, which includes metrics on a GAAP and as adjusted basis reflecting these changes.

Comparative full-year earnings results, including reconciliations of GAAP to as adjusted amounts, are shown below: 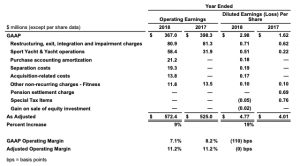 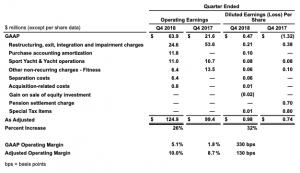 Cash and marketable securities totaled $304.2 million at the end of 2018, down $154.8 million from year-end 2017 levels. The reduction includes net cash provided by operating activities during the year of $337.0 million, which decreased by $64.6 million versus the prior year, primarily due to planned increases in pension contributions, partially offset by lower tax payments. Free cash flow was $208.8 million in 2018. In addition, investing and financing activities resulted in a net cash usage of $486.8
million during 2018, which lowered cash and marketable securities balances.

Investing and financing activities during the year-to-date period included a $909.6 million expenditure for the Power Products acquisition, $793.5 million of net proceeds for issuances of debt related to the acquisition, $193.4 million of capital expenditures, $75.0 million of common stock repurchases, and $67.8 million of dividend payments.

The Marine Engine segment, which manufactures and distributes marine propulsion systems and related parts and accessories, reported net sales of $669.5 million in the fourth quarter of 2018, up 18.6 percent from $564.6 million in the fourth quarter of 2017. The Power Products acquisition contributed approximately 9 percent to the growth rate in the quarter. International sales, which represented 31 percent of total segment sales in the quarter, were up 18 percent compared to the prior year period. For the quarter, the Marine Engine segment reported operating earnings of $81.5 million, which included $11.8 million of purchase accounting amortization and $0.8 million of transaction costs, each related to the Power Products acquisition. This compares with $59.2 million of operating earnings in the fourth quarter of 2017.

Significant growth in both the outboard engine and parts and accessories businesses, including the results of the recent Power Products acquisition, drove sales increases in the quarter. Operating earnings growth was positively affected by these sales increases, as well as favorable impacts from changes in sales mix and new products.

The Fitness segment’s revenue comparisons reflected lower sales to value-oriented health clubs as anticipated. The decline in operating earnings resulted from the nonrecurring items discussed above, along with other operating factors including an unfavorable impact from changes in sales mix, additional inventory cost adjustments primarily related to product transitions, increased freight costs, and other cost inflation and inefficiencies.

“We are diligently executing against our marine strategy, and expect the operational, strategic, and growth advancements achieved by our marine business to lead us to greater success in 2019,” said Foulkes. “With the pending separation of the Fitness segment, we are providing additional outlook comments and guidance for the company exclusive of the Fitness business. This presentation provides increased visibility into the expectations for the performance of the marine operations and will minimize
adjustments to our outlook at separation.

“In our combined marine business, we expect top-line performance to benefit from a steady global marine market, along with ongoing benefits from customer migration to higher horsepower engines and boats with increased technology and content. In
addition, we anticipate market share gains due in part to the continued strong demand and acceptance of new outboard products. The parts and accessories business will also continue to bolster its healthy aftermarket business, while investing in expanding product categories, such as controls, rigging and electrical systems, to increase sales to boat manufacturers. As a result, absent significant changes in the global macroeconomic climate, our plan reflects overall revenue growth rates in 2019 in the range of 9 to 11 percent, including an approximate 4 percent benefit from completed acquisitions.

“For the full-year, we anticipate strong improvement in both gross and operating margins in our combined marine business, given ongoing benefits from new products and acquisitions, volume leverage, and cost reduction activities. Operating expenses are estimated to decline slightly versus 2018 on a percentage of sales basis. Operating earnings for the marine business are expected to grow by a high-teens percent for the year.

“For 2019, we expect Fitness net sales to decline mid-single digit percent from 2018 levels, reflecting lower sales to value-oriented health clubs and stable market demand. While we anticipate gross margin levels to remain consistent with 2018 levels, the plan
reflects operating margin declines due to planned investments in new products and modernizing information technology platforms, offset by certain cost reduction initiatives, which are intended to position the Fitness business to succeed as an independent entity.