It appears the worst is over for the global economy, said Tsai Chi Neng, Chairman of the Group. For the first five month of [fiscal 2010], footwear and manufacturing sales experienced sequential growth on a month-to-month basis. Neng pointed to increased consumer spending in the Greater China Region as a key driver.

For the first two months of the second quarter of fiscal 2010 (January and February), Yue Yuen Industrial reported total revenues of $893.3 million, an increase of 10.4% as compared to the year-ago period.

Management said sales to the Footwear manufacturing business were somewhat higher than last year, adding that wholesales and retail operations in the Greater China Region, which includes China, Hong Kong and Taiwan, continued to exhibit growth. 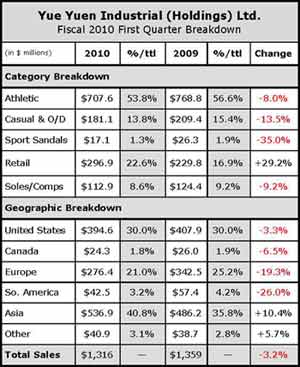