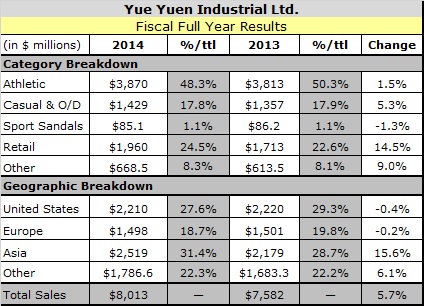 For the full fiscal year, Retail revenues grew 14.4 percent to $1.96 billion, or 4.6 times faster that Manufacturing revenues, which are derived primarily from OEM sales to Nike, Adidas, Reebok, Asics, New Balance, Under Armour, Converse, Salomon, Timberland and other U.S. and European brands.

Total Manufacturing revenues increased 3.1 percent to $6.04 billion in 2014 due mainly to an increase in average selling price. Yue Yuen's two largest customers accounted for $1.70 billion and $1.25 billion in sales respectively.

Yue Yuen's Retail revenues are derived from its publicly traded subsidiary Pou Sheng International (Holdings) Limited, which sells footwear and apparel from Nike, Adidas and other global athletic brands in Greater China. Pou Sheng derives most its sales from the People's Republic of China, where it ended the year with nearly 4,300 retail outlets and 2,700 sub-distributors. The business reported gross profit increased 13.0 percent to $580.6 million compared with 2013 due to stronger demand and less discounting.

Dongguan labor unrest remains a threat
Yue Yuen's consolidated gross profit increased by 7.7 percent to $1.78 billion, or 22.1 percent of revenue, up 40 basis points from 2013. The company said gains in productivity at its manufacturing operations more than offset a $90 million payment it made to an employee benefit fund in April, 2014 to settle a strike by about 45,000 workers at its factories in Dongguan, China. The strike prompted Adidas to shift some production to other plants.

While Yue Yuen characterized the payment as non-recurring, 2,000 and 4,000 worker stuck the plant again for a few days earlier this month to protest changes the company made to offset rising costs. Yue Yuen said workers returned to the job a few days later, but noted it will continue shifting shoe production to Vietnam, which increased its share of the company's footwear production to 39 percent from 34 percent in 2013.

Yue Yuen ended the year with cash and cash equivalents of $971.3 million and inventories valued at $1.32 billion, up 6.5 percent from a year earlier.

On March 10, Yue Yuen reported its net consolidated operating revenue of $1.30 billion for the two months ended Feb. 28, up $114.3 million, or 8.8 percent from the comparable period a year earlier.