Wolverine World Wide continued to depend on 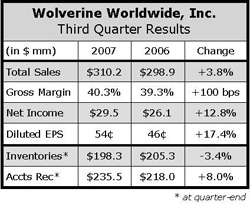 strong results in its Outdoor group to offset declining sales in the Bates military business, as well as to offset the companys departure from the Hush Puppies slipper business and the Stanley boots business. The transition out of these efforts, as well as lower demands for leather, reduced revenues by an estimated $15 million, or a 6.5% impact. Revenue generated from newer initiatives, like Merrell and Wolverine apparel and Patagonia footwear, contributed 2.7% to the growth. Foreign exchange gains contributed an additional 2.1% to sales growth in the third quarter, while revenue in the companys core operations increased by 5.5% on a constant dollar basis during the quarter.

Order backlog was up over 11% at quarter end, with “a substantial portion” slated to ship in the first quarter of 2008. Excluding Merrell apparel and Patagonia, backlog would be a little higher. On a same currency basis, backlog would still be up in the double-digits, though slightly below 11%.

WWWs international business is driving more operating profit growth than domestic and profits are expected to eventually see a 60/40 split.  The revenue ratio however, will be in the 35/65 to 40/60 range with domestic ops providing the lions share.

The Outdoor group was described as “the most significant contributor” to the Q3 revenue increase, with strong Merrell and Sebago shipments coupled with another quarter of Patagonia footwear sales, driving a strong double-digit increase. The Hush Puppies business was up low-single-digits in the quarter, while the Heritage Brands group posted flat results. Although the Wolverine brand business was “solidly above” last year, revenue for the Wolverine Footwear Group declined due to “planned decreases” in the military contract, Stanley and private label businesses.

The Outdoor Group, which consists of Merrell footwear and apparel and the Sebago and Patagonia footwear brands, saw sales increase nearly 20%, with Merrell footwear posting a double-digit increase. The Merrell brand as a whole saw sales increase approximately 16% for the quarter. Backlog for Merrell footwear was up in the “strong double-digits” entering the fourth quarter with the enterprise described as “taking shelf space from the competition.” The Merrell apparel program saw initial shipments come in “somewhat lower than originally forecast” at approximately $7.5 million. The company will make adjustments to the program going forward, feeling that the current offering was “a little too casual and should have been more athletic performance in nature.” In addition, the company felt the branding effort was too subtle, especially for the international markets.

The Sebago business saw Q3 revenues increase over 20% with double-digit increases both domestically and internationally. The brand opened over 100 new accounts in the U.S. and Europe during the quarter. Sebago has experienced double-digit growth in the year in all four product categories: marine, dress/casual, sandals and kids.

The Hush Puppy Company paired its revenue increase with gains on the bottom line as well. The business saw improvements in the U.S, International and European operations, but this revenue growth was partially offset by the decreases for Hush Puppies slippers, which is a low margin business being exited by year-end.

Excluding slippers, Hush Puppy revenue for the quarter increased at a mid-single-digit level, where earnings grew at a double-digit rate.

Though the Heritage Brands Group posted flat sales for the quarter, earnings increased in the mid-single-digits.

Revenue in the Wolverine Footwear Group was below last year's third quarter due to the continued phase out of the private label and Stanley businesses, as well as lower planned shipments to the Department of Defense. The core Wolverine brand, though, had a “very good quarter” with a “solid revenue increase.”

The Track 'n Trail concept now has 17 doors open with comp sales for the year-to-date period up in the mid- to upper-single-digit range. Merrell footwear accounts for approximately 50% of all footwear sales in the store. Management said theyll open a “handful” of Track n Trail stores in 2008, shifting focus to the Merrell concept. The e-commerce business, which has been up in the double-digits every year for the last four years, was said to be “having a real positive revenue gain this year as well.”