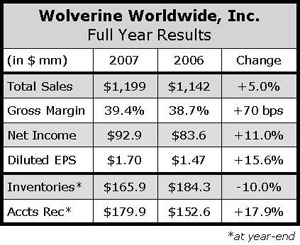 Wolverine World Wide is celebrating the 125-year birthday for the Wolverine brand this year, but it is the companys Outdoor Group that is getting all the attention once again as it set the pace for revenue growth for the 2007 fourth quarter and year, with the Merrell business posting “robust” double-digit increases in both revenue and earnings for the year.


Blake Krueger, WWWs president and CEO, said that Merrell enters 2008 with “very positive momentum in all geographic regions.”  While the Outdoor Group continues to drive the headlines, Hush Puppies Company, Heritage Brands Group and Wolverine Footwear Group all posted revenue gains for the year, when excluding their “businesses in transition.”

The companys 2007 results included a revenue reduction of about $40 million in what WWW calls its “transition businesses,” which includes Hush Puppies slippers, Stanley licensed footwear and private-label, as well as expected lower sales to the Department of Defense and lower leather demand.

The Outdoor group, which is comprised of the Merrell, Patagonia Footwear and Sebago brands, posted a 17% sales increase for the fourth quarter, with Merrell “contributing a significant majority of the increase.”  WWW said the Group achieved excellent leverage as earnings in the quarter were up almost 3X the rate of the sales increase.

The Merrell brand saw 2007 full year revenues increase at a strong double-digit pace and were said to be “significantly higher than last year in all regions.”  Management said the Merrell women's casual product is performing well at retail and saw higher-than-expected reorders. Sales of performance outdoor product were said to be “especially robust in the U.S.”

The Merrell retail store count grew by 46% last year to 41 locations at year-end.  WWW expects the store count to approach 100 by year-end 2008 as new footwear offerings coupled with Merrell apparel and bags will enable the companys global partners to “accelerate the opening of Merrell stores.”  In 2007, WWW opened three company-owned Merrell stores in North America.   They ended the year with over 450 dedicated Merrell shop-in-shops around the world.

Management said the first full year of business for Patagonia Footwear, which was distributed in over 30 countries, met expectations of the brand's core consumers.  They said strong sell-through, especially in men's, led to increased door expansion after initial testing with key U.S. and global retailers.  Sales of the men's Patagonia line in the companys Track 'n Trail stores accounted for 10% of all footwear sales during the last month of the year.  Reported strong sell-through in a test with REI saw the men's line expand from 2 to 20 doors.

Sebago reportedly had strong 20%+ revenue increases for the fourth quarter and the year, with even stronger increases in the U.S. and Europe.  Sebago ended the year with 25 retail stores and 68 shop-in-shops installations.   Management said that women's product was well received in 2007, netting growth of over 50% for the year.

Hush Puppies revenue “declined slightly” for the fourth quarter, due to the “planned exit from the low-margin slipper business.”  Strong growth in the Europe, International and Canadian businesses led to a high-single-digit revenue increase for the quarter.  Lower shipments in the slipper business offset the overall Q4 increase for the Group.  For the full year, Hush Puppies global revenue increased about 2.5%, with lower slipper revenues cutting revenues by approximately 50%.

The Heritage Brands Group, which includes the companys two largest licensed footwear businesses, Caterpillar and Harley-Davidson, also had what was described as a “solid year,” with revenues up in the mid-single-digit range. The Group achieved a “slight revenue increase” in Q4 despite a decision to refocus the distribution of H-D footwear in the U.S.

Earnings for the Heritage Brands Group were up double-digits for the year, with a strong performance in the fourth quarter.  Gross margins were up 120 basis points.

The Wolverine Footwear Group saw revenues down in the mid-single-digit range “as planned” for the quarter and the year, as lower sales in certain transition businesses, including private-label and Stanley, and lower planned sales to the DoD had a negative impact on top-line growth. The core Wolverine boots and shoes business posted a low-single-digit revenue increase for the year, due in part to a significant increase in the mobile distribution channel.

Total company year-end inventories were down 10% and backlog was up 10% at the end of the period. 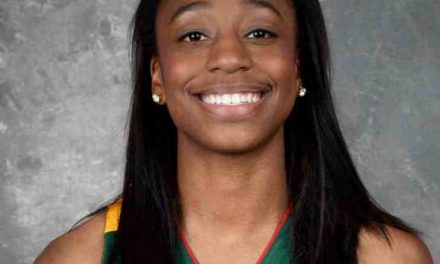 Wolverine Promotions to Fuel Growth at Merrell and Chaco