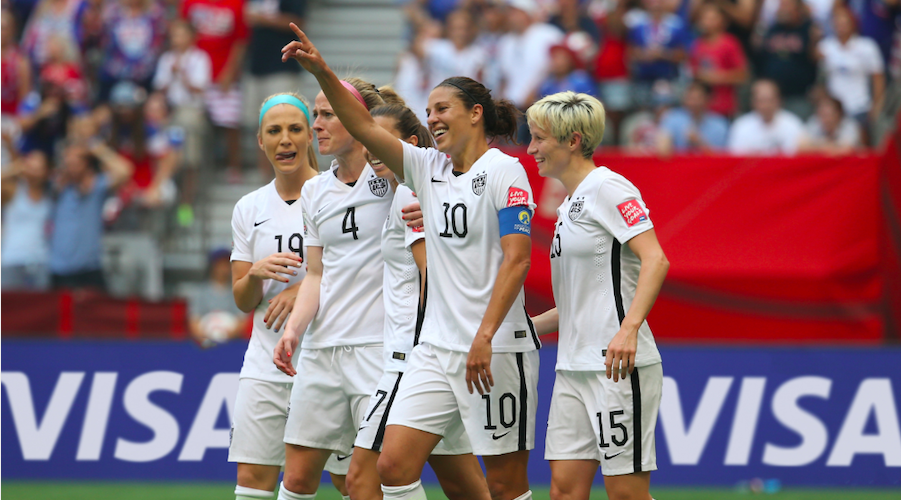 Visa entered a five-year sponsorship agreement with the world leader in women’s soccer, the U.S. Soccer Federation, to contribute to its long-standing investment in the development of women’s soccer and support the U.S. Women’s National Team through 2023.

Visa will be the presenting sponsor of the SheBelieves Cup, which was started in the run-up to the FIFA Women’s World Cup Canada 2015, a four-team women’s international team tournament played in the United States each year. The tournament is based around U.S. Soccer’s SheBelieves initiative, focused on inspiring young girls and women to accomplish their goals and dreams. The agreement between U.S. Soccer and Visa was facilitated by Soccer United Marketing (SUM), U.S. Soccer’s partner for the past 15 years.

“Sport presents a huge opportunity for women to pursue their dreams on and off the field,” said Lynne Biggar, chief marketing and communications officer, Visa. “Women make the vast majority of consumer purchases and start millions of small businesses a year. By making a substantial investment in women’s initiatives, including soccer, Visa is celebrating this powerful global force.”

“We are incredibly excited Visa is partnering with us on our overall mission to become the preeminent sport in the U.S.,” said Jay Berhalter, chief commercial officer, U.S. Soccer. “With Visa joining us in our long-term investment in women’s soccer, we will continue to increase opportunities for women players, coaches and referees at all levels. Overall, we are looking forward to Visa helping us reach our mission by increasing participation, developing world class players, coaches and referees, and increasing fan engagement.”

“Soccer United Marketing is proud to facilitate this multi-year partnership between U.S. Soccer and Visa,” said Jen Cramer, senior vice president, SUM. “We are always looking to establish partnerships with iconic, forward-thinking brands who are committed to advancing the game and developing female leaders for the next generation both in athletics and business. This exciting relationship between Visa and U.S. Soccer will elevate soccer’s popularity to even higher levels in North America, especially in advance of this summer’s FIFA Women’s World Cup.”

Visa is also launching a new U.S. marketing campaign celebrating the U.S. Women’s National Team. The centerpiece is a new ad spotlighting stars Mallory Pugh, Becky Sauerbrunn, Rose Lavelle, Jessica McDonald, Abby Dahlkemper and Adrianna Franch as they attempt to earn a fourth star by winning the FIFA Women’s World Cup 2019 title. The ad provides a glimpse into the players’ hard work and determination as they strive to achieve greatness on the world stage this summer. This builds upon Visa’s new global ad campaign, “One Moment Can Change the Game,” focused on elevating women in sports.

“My teammates inspire me in so many ways every day,” said Mallory Pugh, United States Women’s National Team Forward. “I am so proud to be part of Visa’s campaign which celebrates athletes the way we are and showcases the magic moments on the field. Visa’s campaign is another incredibly empowering message for women and girls.”

Visa signed on as the presenting sponsor of the Player of the Match for the FIFA Women’s World Cup 2019.

Since the beginning of the Team Visa program in 2000, on average fifty four percent of Team Visa have been women, including the newly announced 18 women soccer players from around the world. The program has supported more than 400 athletes and aims to provide athletes with the resources needed to achieve their goals on and off the field.

On the opening day of the tournament on June 7, Visa will host the finals event for its first global competition focused on celebrating women entrepreneurs who are making strides in Fintech and Social Impact around the world. Twelve finalists from six regions will pitch their solutions for a chance to win the grand prize of $100,000 per challenge.

Uplifting Women from the Field to the Boardroom

Visa’s support for women goes beyond the playing field. Ninety-four percent of women in the C-suite have played a sport at some time in their lives.1 Given the correlation between success in sport and business, Visa is a catalyst for supporting and championing women in all facets of life. Visa’s investment in women’s soccer globally builds on Visa’s initiatives that support women entrepreneurs and small business owners. Others include:

“As a leading sponsor of women’s soccer and advocate for female empowerment, Visa is dedicated to accelerating the growing support of the game, on and off the field,” continued Lynne Biggar, chief marketing and communications officer, Visa. “From championing professional players and celebrating their stories, to tapping into the strength of the Visa brand and elevating the game’s visibility across the world, Visa’s commitment to women’s soccer is here to stay.”