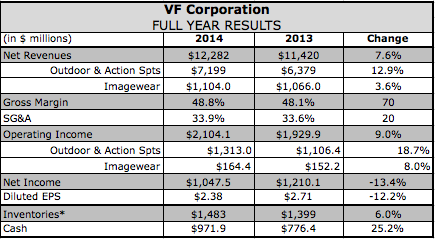 VF Corp. reported impressive double-digit growth in the fourth quarter in its three growth engines: The North Face, Vans and Timberland. Driven again by its Outdoor & Action Sports Coalition, VF also forecast high-single digit growth on a currency-neutral (c-n) basis for 2015 although currency-challenges are expected to bite into reported gains.

On a conference call with analysts, Steve Rendle, SVP, Americas, said the fourth-quarter momentum in the coalition was “broad-based with strong growth in wholesale and D2C as well as double-digit growth in nearly every brand including The North Face, Vans, Timberland, Kipling, Napapijri, Reef, Lucy and Eagle Creek.”

In the Americas, which represents about 70 percent of TNF's full-year sales, fourth-quarter revenues for the brand were up at a mid-teen percentage rate. D2C grew more than 25 percent and wholesale was up in the high single-digits.

Rendle said the performance was boosted by “one of the strongest product offerings in TNF's history,” including efforts to expand the brand’s reach across all four seasons. Thermoball in 2014 exceeding $100 million in sales globally while Mountain Athletics ”increased momentum throughout the year” at both D2C and wholesale channels. The Fuse Form Brigidine jacket “showed great results in the fourth quarter” with the upcoming launch of the Fuse Form Dot Matrix jacket this spring showing promise.

On the marketing front, its “Your Land” commercial received more than 7.4 million YouTube views and drove more than 2.1 billion impressions while donating $250,000 to national park conservation.

Looking at 2015, North Face's global revenues are expected to expand low double-digits on a c-n basis, in line with its 2017 growth plan. On a reported basis, revenue should be at a mid single-digit growth.

Said Rendle, “We are truly seeing great momentum in this brand around the world and are well-positioned to realize another strong year.”

Vans revenues were up 17 percent (up 20 percent c-n) in the fourth quarter with 30 percent growth in its D2C channel and strong wholesale growth. The performance represented its 25th consecutive quarter of double-digit growth.

In the Americas, which is about 60 percent of Vans’ full-year sales, fourth-quarter revenues increased 20 percent, slightly ahead of expectations. Rendle particular credited Vans long success to its ability to connect with fans. The 32nd Annual Vans Triple Crown of Surfing was viewed by 10 million people online and garnered more than 100 million social media impressions. Custom Culture, the Vans Warped Tour and House of Vans also supported brand awareness.

For the year, global revenues for Vans were up 17 percent on both a reported and c-n basis, ahead of its 2017 plan “and clear evidence that as the world's largest youth culture brand we are firing on all cylinders globally and our momentum is strong,” said Rendle. In 2015, Vans' global c-n revenues are expected to be up at a mid-teen rate consistent with the 2017 plan. On a reported basis, revenue should be at a high single-digit growth rate.

Timberland revenues were up 11 percent (up 15 percent c-n) in the quarter driven by “incredibly strong growth in our wholesale business,” said Rendle. The performance marked the fifth consecutive quarter of double-digit growth in the Americas.

Growth was “really well balanced across” all footwear and apparel categories with particular strength in casual and outdoor footwear for men and women.

“Our pro-Boondock family of footwear also continued its solid momentum,” added Rendle.” On the apparel side, sales were driven primarily by outerwear from shirt jackets to insulated product to beautiful leather bombers, really strong and balanced growth.”

In 2014, Timberland’s full-year global revenues were up 13 percent to reach $1.8 billion. Sales grew 15 percent on a c-n basis and are ahead of its 2019 plan set in September. For 2015, Timberland is expected to expand at a low-teen c-n growth rate, in line with its 2017 plan. On a reported basis, revenue should be up at a mid single-digit growth rate.

Among its other coalitions, the Imagewear segment, which includes its work apparel brands as well as its Licensed Sports Group (LSG) business, saw sales grow 4.0 percent to $298.3 million and advance 5 percent on a c-n basis. The gains were driven by particular strength in the licensing sports business, which includes Majestic Athletic. Operating income gained 7.9 percent to $48.4 million. The 3.6 percent gain in the year for the coalition was helped by new product introductions in our Red Kap and Bulwark brands and the LSG business, which had strong demand for NFL and MLB products.

Among its other coalitions, Jeanswear (Wrangler, Lee) saw sales inch up 2.9 percent in the quarter to $755.1 million while operating profits rose 5.4 percent to $141.6 million.

VF’s companywide earnings in the quarter plunged 66.8 percent to $122.1 million, or 28 cents a share, impacted by a $396 million pre-tax charge, representing 70 cents a share, to reduce the carrying value of the goodwill and intangible assets related to its 7 For All Mankind, Ella Moss and Splendid brands.

Adjusted EPS increased 20 percent to 98 cents, in line with Wall Street’s consensus estimates. Gross margin improved 80 basis points to a record 49 percent driven primarily by the continuing shift of its revenue mix toward higher margin businesses. SG&A as a percent of revenues was up 20 basis points to 32.9 percent.

While it expects to return more than $1.2 billion to shareholders in 2015 through share repurchases and dividends, “our first priority of course remains on the acquisition front,” said Eric Wiseman, chairman, president and CEO, on the call. The strengthening dollar has made international acquisitions more attractive and the company is still looking “primarily, not exclusively” at brands in the Outdoor & Action Sports space.

Wiseman said VF is always in discussions but it’s always uncertain when a deal comes to fruition. He added, “We always have a bunch of businesses that we are actively engaged in but we can never anticipate when those discussions will result in an acquisition.”