Under Armour Beats the Street in Q1

Under Armour, Inc. got Wall Street excited again this week following the companys report of first quarter results.  Like the news media during a Barack Obama speech, analysts and investors were quick to buy into the numbers, conveniently ignoring the lack of detail that typically coincides with Under Armours quarterly reports.

First quarter net revenues increased 27.1% to $200.0 million in the first quarter, a phenomenal achievement in this economic environment.  Net income jumped 38.0% to $4.0 million, or 8 cents per diluted share, reflecting the companys commitment to (and execution of) expense controls that set it up for a solid year ahead.  Inventories decreased a little more than 2% for the period – no small feat given the inflow of footwear needed for the companys running footwear “launch.” 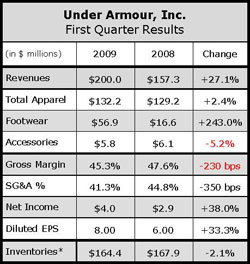 But behind the top line numbers is the fact that at least $40.2 million of the $42.7 million revenue increase came from the addition of a new footwear category – a category that is estimated by some analysts to be a $100 million business for Under Armour this year.  Not bad at all considering the number of running brands that have tried desperately for years to reach that mark, but its still a small slice of a market that will sell $5 billion in running shoes.
Another key metric was important on two sides.  The company reported that direct-to-consumer revenues, business conducted through owned-retail stores, outlet stores and Internet sales jumped 37.5% for the quarter.  This means less product was sold through the traditional retail avenues- despite the addition of running footwear to the mix and the expansion of the apparel and footwear business into the mall.  On the plus side, the increase in the direct business helped the company liquidate inventories, grow margins and improve cash flow.
For the first time, the company did not report results of the mens, womens and kids apparel businesses or break out the U.S. versus the international business, other than to say that international represented about 4% of the first quarter business this year.  Since the international business was roughly 8.4% of the total business in Q1 last year, this would infer a nearly 65% decrease in international revenues at a time when the company is making a push in Europe with its first soccer boot.  The upside is that, due to the stronger dollar, UA actually saw a foreign currency benefit in the period.

Footwear and Direct Retail Mask Weaker Apparel Business
Analysts contacted by Sports Executive Weekly suggested that the growth in both footwear revenue and the direct business implied a decline in the mid- to high-single-digit range for wholesale apparel.
The last piece that garnered little attention was that licensing revenues – those royalty-type fees that reflect the sales of products licensed to others to produce and sell – were down 7.4% for the period.  Granted, some of that decline may be due to pulling more product in-house, but the in-house accessories business was down about 5.2% in the quarter, as well. This suggests that when it comes to bags, headwear, sunglasses, watches and mouthguards, etc.,  consumers are not buying into the brand at the same rate  they did last year.

Management said they were not assuming an improvement in the [retail] environment this year and are planning the business conservatively, especially around the U.S. apparel business.  Footwear remains planned as the largest revenue growth-driver in 2009, and management suggested that the next key indicator will be the performance of the updated running line for back-to-school.  Training footwear, which debuted in the spring of last year, was planned down for the year due to the addition of running footwear and the expected cannibalization of the business.
Company Chairman and CEO Kevin Plank said that if any mistakes were made on the running “launch” it was probably calling running a launch.  He said they spent a fraction of what was spent in training last year and may have “created expectations that might not have been as realistic.”

Mr. Plank said they are introducing the Under Armour soccer boot in a limited way through soccer specialty accounts in the U.S. and Europe this spring, starting with some very high-end product priced at $200 per pair.  He said they will increase allocation of the soccer product as they “gain authenticity on the pitch” and acknowledged that it is “a bit quieter” than typical product launches in the past.  “We feel it is appropriate for long-term success and (it) helps us add another leg to the growth platform of footwear,” said Plank.

The company is launching basketball next, and although there is no designated launch date as of yet,  most analysts feel the best time timing would be next years February NBA All-Star timeframe.  Plank said UA basketball shoes will show up on Under Armour Undeniable teams, including the University of Maryland and Texas Tech, along with some other properties they will be adding.
“We believe that we are going to be very important in basketball,” said Plank. “We also believe that we have the luxury of being patient as to the point when we decide to enter that market. And we will do so, frankly, first and foremost and only when the product is 100% ready. So we're biding our time and (were) going to make a strategic decision around that.”
Gross margin was 45.3% of net revenues for the first quarter compared with 47.6% of net revenues in the year-ago quarter, a decline the company attributed in part to the higher proportion of “lower gross margin footwear sales.” On the apparel side, margins were impacted by “a less favorable product mix, as well as some higher product costs,” while the licensing business also cut into margins for the quarter.
But UA sliced 360 basis points from the expenses line, cutting SG&A to 41.3% of net revenues in Q1 compared with 44.9% of net revenues in the prior year's period.  Marketing expense for the first quarter of 2009 was 16.5% of net revenues versus 17.8% in the prior year's period.
The company still expects to invest in marketing at the high-end of the range of 12% to 13% of net revenues for the full year.
Cash and cash equivalents were $65.6 million at March 31 compared with $17.6 million at March 31, 2008. Inventory at quarter-end decreased 2.1% to $164.4 million.  Management said the running footwear launch was an allocated program, with much of it being shipped directly to retail from the factory, which benefited the inventory balance at the end of the quarter.
UA plans to open an additional six to ten outlet stores this year, and a “significant portion” of its capital investments will go towards improvements at its distribution center and additional in-store fixtures and concept shops. 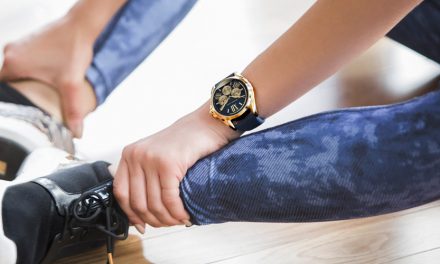