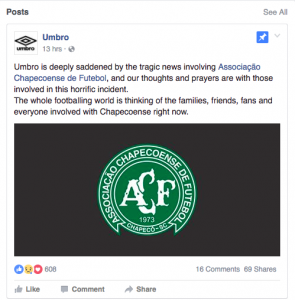 Umbro wrote on its Facebook page, “Umbro is deeply saddened by the tragic news involving Associação Chapecoense de Futebol, and our thoughts and prayers are with those involved in this horrific incident. The whole footballing world is thinking of the families, friends, fans and everyone involved with Chapecoense right now.”

The British sportswear and football equipment supplier, which is based in Manchester but owned by Iconic Brand Group, has been the kit sponsor for the team since at least the seventies.

Hoka One One Named Presenting Sponsor Of Western States