At The Finish Line, sales of toning shoes fell more than 45% in the fiscal fourth quarter with heavy discounts on those items also dragging down merchandise margins. But the athletic footwear chain found enough strength in lightweight running, basketball and its e-commerce business to make up for the shortfall. More encouragingly, comps in the current quarter-to-date  from Feb. 27 through March 20  were up 10.1% on top of a 15.4% increase for the comp period a year ago. 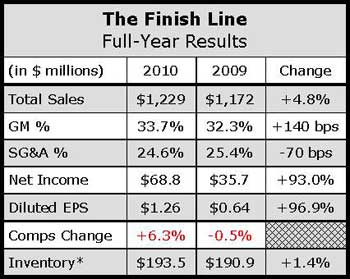 Lids Foundation Announces Grant Awards for First Half of Year