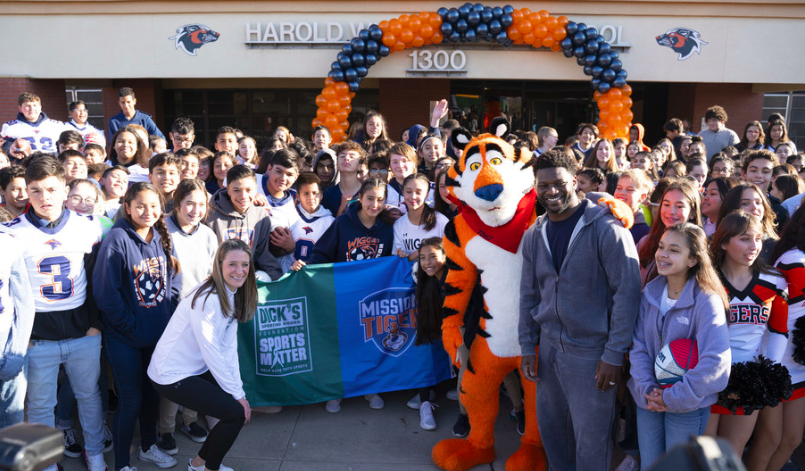 The Dick’s Sporting Goods Foundation (DSGF) partnered with Kellogg’s Frosted Flakes’ Mission Tiger to give a Sports Matter grant to every public middle school athletic department in El Paso — a total donation of $500,000 — to help give more middle school kids access to sports.

The grant comes as the Tony the Tiger Sun Bowl officially takes over El Paso on New Year’s Eve. In August 2019, Kellogg’s Frosted Flakes was announced as the title sponsor of the newly named Tony the Tiger™ Sun Bowl, making Tony the Tiger the first mascot to ever lend his name to a college football bowl game.

“At Dick’s we believe that sports make people better and we are committed to supporting all youth athletes in need through our Sports Matter program,” said Aimee Watters, executive director of The Dick’s Sporting Goods Foundation. “We’re proud to partner with Mission Tiger to help provide the much-needed funding and solutions to the communities we serve, especially here in El Paso.”

“El Paso is a city that’s touched all of our hearts this year for many reasons, so along with Dick’s Sporting Goods Foundation, we couldn’t be happier than to make this incredible impact,” said Brant Wheaton, marketing director of Kellogg U.S. ready-to-eat cereal segment. “Sports are vital to teaching leadership, teamwork and confidence in kids, and that’s why Mission Tiger and Sports Matter are essential in filling the funding gaps for middle school athletic programs across the country.”

“I want every kid to have the chance to play sports just like I did,” said Sun Bowl alum and football Hall of Famer LaDainian Tomlinson. “Sports open countless doors and teach kids valuable lessons about teamwork and leadership that will impact the rest of their lives. I’m proud to team up with Mission Tiger and The Dick’s Sporting Goods Foundation to give kids in my home state a chance to reap the true benefits that middle school sports bring.”

Since Mission Tiger launched in August 2019, the program has helped more than 213,000 kids nationwide receive better access to sports by funding middle school sports programs in need. Since 2014, Dick’s and The Dick’s Foundation have pledged more than $100 million to support youth sports teams and leagues in need and helped more than 1 million young athletes across the country play sports. The Sports Matter program strives to increase awareness for the growing issue of underfunded youth athletics nationwide and provide much-needed support through equipment, uniform and monetary donations.

POC to Relocate to Park City from Aspen