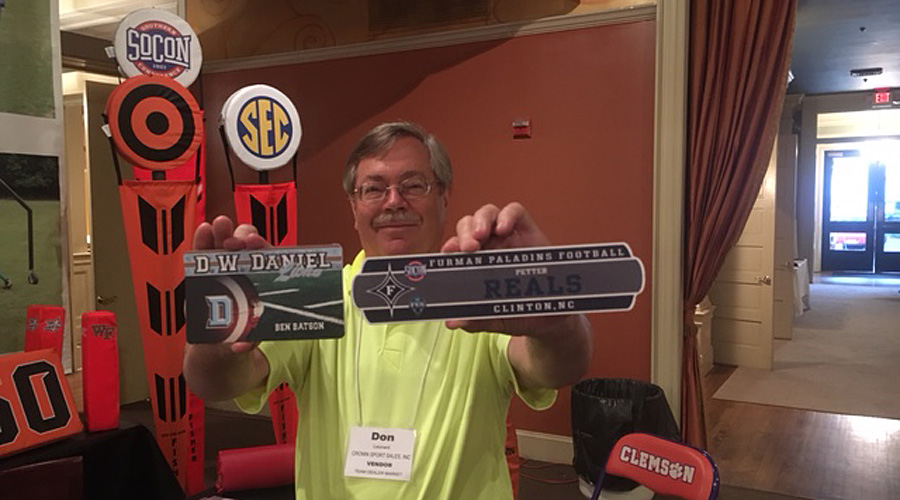 Attendance at the three-day Team Dealer Market organized by reps in the Carolinas rebounded this year as the event returned to Charlotte, NC after a one year detour.

About 190 team dealers, including some from as far away as Florida and Georgia attended the 11th edition of the show to check out spring 2017 baseball gear from Diamond, Easton, Mizuno, Rawlings, Schutt, Wilson and other vendors. Altogether more than 200  brands, including makers of bleachers, tackling dummies and other gear were represented  in 40 booths from June 6-8.

“This may be the biggest show ever,” said Chuck Overman of Overman & Associates of Charlotte, who co-founded the show. “We were very happy with attendance.”

Manufacturers representatives met with about 150 principles and salesmen from independent team dealers on Monday and Tuesday, while Wednesday was set aside for meetings with 38 dealers from BSN Sports, which began attending the show in 2014. BSN has grown to a field sales force of more than 500 by acquiring dozens of independent  team dealers since 2004. The Dallas, Texas-based company is believed to be the largest team sports apparel and equipment dealer in the United States.

The Team Dealer Market returned to Charlotte this year after a detour to Winston-Salem, NC that resulted in many South Carolina dealers skipping the show last year, Overman said.

Topics of discussion at the event included the challenge of meeting expectations for custom apparel from parents, who thanks to new web platforms, are taking over a growing percentage of such orders from coaches. While the platforms have freed coaches from the tedious task of taking and tracking orders and payments for spirit wear, shoes, gloves and other accessories, teams dealers are finding orders are coming in much later. Given that most sublimation printers require six weeks lead time, dealers are missing deadlines and alienating consumers.

A fall edition of the show featuring the latest football gear is scheduled to take place in late October at the same location.