Long considered an up-and-coming sport to both watch and play, the popularity of soccer has been growing steadily since the rise of the soccer mom. In fact, advertisers and programmers looking for a unique opportunity to connect with fans outside well-established American sports, such as football or basketball, take note: the World Cup could be that space. After all, the sport’s fans are dedicated to the teams they root for, avid spenders and quite social when it comes to digital dialogue. Soccer’s fans are also a pretty diverse lot, which isn’t surprising considering it’s the preeminent sport throughout much of the world.

In fact, a recent survey by The Harris Poll^ found that nearly two-thirds (62 percent) of people who follow soccer, or fútbol, say they take notice of the companies that support their favorite teams and players.

What’s more, these fans are also avid consumers when it comes to team pride and showing their support!

The poll found that 58 percent of Americans who follow soccer already own merchandise supporting a favorite player, team or league, and over half of this same group (54 percent) say that they think wearing apparel to support their fandom is an important part of the watching the World Cup. Better still, many of these fans anticipate cracking open their wallets. Nearly half (45 percent) of soccer fans said they plan on purchasing merchandise in support of their favorite player, team or league.

Beyond sideline billboards and sponsored merchandise, The Harris Poll also found that advertisers have another way of connecting to fans, especially among the highly-coveted younger demos: second screens. A quarter of 18-24 year olds said they would post to social media (Facebook, Twitter, etc.) while tuning in to World Cup games (compared to 12 percent of all respondents) and over a third of respondents in that same demo (34 percent) would likely look up game, team or player stats on a mobile device during World Cup games.

The survey results beg the question: Has soccer in the U.S. finally found a foothold in terms of viewership?

The advertising avenues that can reach these fans are growing as well.

According to a separate study conducted by Nielsen, the amount of networks-both English and Spanish language-investing in soccer programming, as well as the amount of time these network have dedicated to airing the sport, have risen dramatically since the last World Cup. In 2010, 11 networks aired over 2,600 telecasts of soccer events. By the end of 2013, however, 21 networks that aired about 3,890 soccer event telecasts. The amount of programming hours of soccer events over that time saw a 43 percent increase to boot.

In 2010, estimated total television advertising spend for soccer events programming was about $265 million. By 2013, it jumped to $378 million-a 43 percent increase. 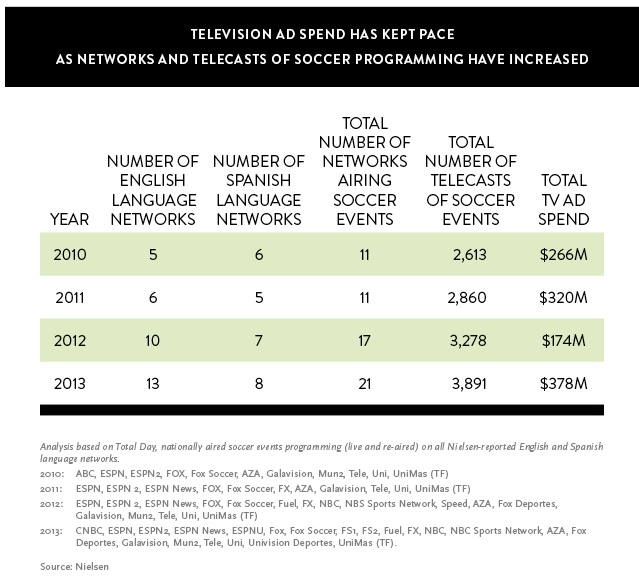 The study also found that the audience composition for all televised soccer events changes during World Cup years, as viewers get drawn into the spectacle of tournament and perhaps get to watch a team representing their own country of origin compete on the pitch.

For instance, while Hispanic viewership has remained a heady part of all televised soccer events, in 2010 white non-Hispanics made up 32 percent of the viewing audience. This was another chance for marketers to reach an oversized share of the largest part of the estimated TV viewing universe. 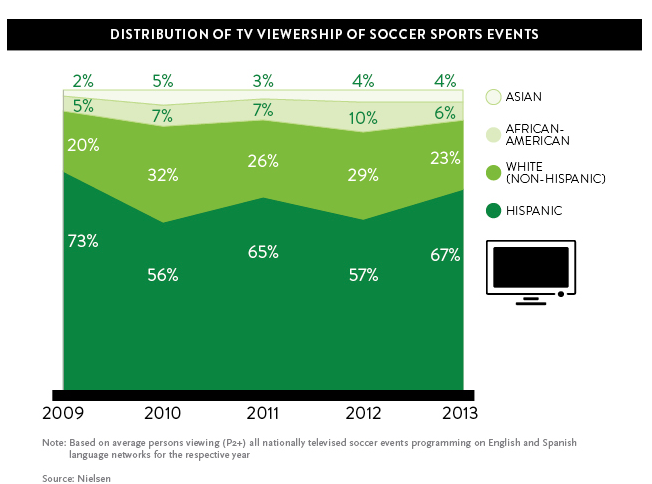 The interest that the World Cup draws has also benefitted Major League Soccer (MLS). The league's TV viewership increased by 24 percent from 2009 to 2013. The uptick is perhaps a bellwether that “the beautiful game” has finally found a foothold among sports fans here in the States. 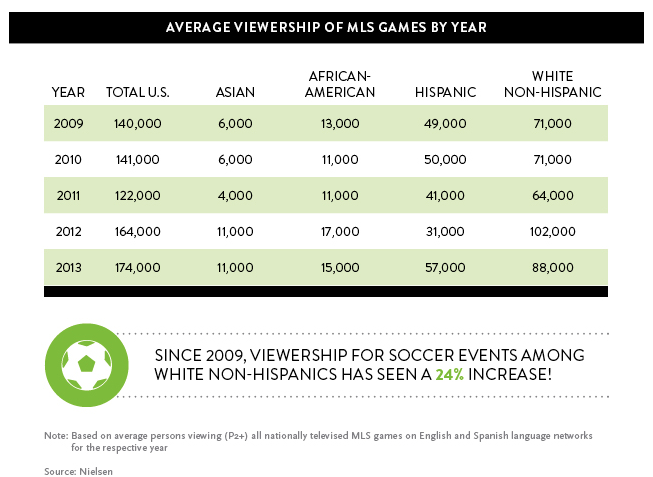