“With product and marketing initiatives that continue to resonate with our consumers worldwide, we achieved a new quarterly sales record of $856.2 million in the third quarter of 2015. These results followed record first and second quarter revenues, resulting in a 34.1 percent net sales increase for the first nine months of 2015 as compared to the same period last year,” began David Weinberg, chief operating officer and chief financial officer. “Driving the quarterly revenue were net sales increases of 11.8 percent in our domestic wholesale business, 52.9 percent in our international wholesale business, and 20.9 percent in our company-owned global retail business, which includes a 10.4 percent increase in comparable sales for the quarter. Of note, the gains in our business came despite the impact of negative foreign currency exchange rates in Brazil, Canada and Chile, and a rather sluggish domestic retail environment where we still achieved an increase in average price per pair of 6.8 percent during the third quarter in our domestic wholesale business.”

The company’s diluted earnings per share for the third quarter of 2015 was negatively impacted by several factors including foreign currency translation and exchange losses of $13.5 million, and increased deferred rent expenses of $3.5 million related to the new Fifth Avenue Skechers retail store, which opened during the third quarter, and a second Skechers location in Times Square, which just opened. Additionally, during the third quarter of 2015 diluted earnings per share were impacted by increased legal expenses of $5.0 million related to the settlement of personal injury lawsuits from the company’s toning footwear business; and $5.9 million in higher legal fees and associated costs primarily related to intellectual property litigation, which included the matter of Converse, Inc. v. Skechers U.S.A., Inc., which went to trial before the International Trade Commission in August of this year. The company believes that most, if not all, of these legal matters will come to a conclusion by early next year. During the third quarter of 2015, these additional expenses reduced diluted earnings per share by 15 cents.

Robert Greenberg, Skechers chief executive officer, commented: “The continued quarterly sales records, including our highest quarterly sales in the company’s 23-year history in the third quarter, is a testament to the strength of our brand and the innovative product we continue to develop and deliver. We are pleased that Skechers has grown to be the second largest athletic footwear brand in the United States, and that we are expanding into new doors and opening more company-owned stores in key locations, including a Skechers store on Fifth Avenue in New York and our second in Times Square. At the close of the quarter, there were 1,210 Skechers stores worldwide, including just over 830 outside the United States. The company continued its positive sales trend in the third quarter with double-digit gains in our international subsidiary, distributor and joint venture operations, including a triple-digit increase in China. To build our brand during the period, we aired numerous commercials for kids with our animated characters, as well as a new Sugar Ray Leonard Skechers Sport spot, a BOBS from Skechers spot featuring the No. 1 song ‘Riptide’ from Vance Joy, and our Demi Lovato commercial during the excitement over her new single ‘Cool for the Summer,’ among others. Also in the quarter, we signed pop singer Meghan Trainor as our latest global ambassador, and entered a multi-year agreement for the title sponsorship of the Los Angeles Marathon under the Skechers Performance Division. We are looking forward to the holiday season with new commercials starring Demi Lovato, Brooke Burke-Charvet and Kelly Brook, as well as several new Skechers Kids spots. Our marketing and product are on target, and we are continuing to invest in our infrastructure and develop new product innovations to advance our brand and drive momentum around the globe. We believe that this positive momentum will continue to grow across our three main business channels in 2016. We continue to invest in our global business to further gain market share and monetize what we see as a significant long-term opportunity for Skechers.”

Weinberg added: “Though we believe the sluggish macro domestic retail environment and declining currency in several key markets had an impact on our net sales, the third quarter was still a sales record. We are continuing our retail expansion and plan to open an additional 12 to 17 company-owned Skechers stores before the end of the year, in addition to the five that have already during October 2015. Along with the 12 Skechers stores already opened through our international distributor and franchise partners this month, another 45 to 55 Skechers stores are also planned through the remainder of the year-which will bring us to more than 1,280 stores by year-end. Given our double digit retail comps, increase in backlogs of approximately 28 percent and market share gains, we believe consumer demand remains strong for our footwear categories worldwide. With the improved efficiencies in our distribution centers and our solid financial position, including, $510.7 million in cash and cash equivalents, the company is well positioned for continued growth. While we are comfortable with the analysts’ current consensus for fourth quarter revenue and earnings, we see the significant potential in the first quarter of 2016 and the entire year by investing in our product, marketing and infrastructure.” 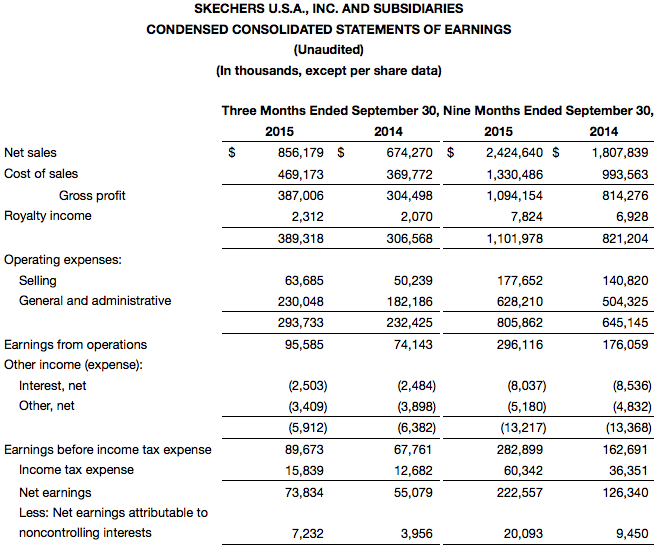 The Finish Line Elects Langham to Board