With product and marketing initiatives that continue to resonate with our consumers worldwide, we achieved a 30.7 percent net sales increase over the third quarter last year, and the highest quarterly revenues in the Companys 22-year history. These results followed record first and second quarter revenues, resulting in a 29.5 percent net sales increase for the first nine months of 2014 as compared to the same period last year, began David Weinberg, chief operating officer and chief financial officer. The growth in the quarterly revenue came across our three key distribution channels -we achieved net sales increases of 18.5 percent in our domestic wholesale business, 60.6 percent in our international wholesale business, and 25.0 percent in our Company-owned global retail business, which included an 11.0 percent increase in comparable net sales for the quarter on top of a double-digit increase last year in comparison to the third quarter in 2012.

Robert Greenberg, Skechers chief executive officer, commented: “We are extremely proud of our three consecutive quarters of record revenues and increasing sales around the world. Our product focus is on target and we are providing consumers of all ages what they want-from both a fashion and comfort standpoint. Importantly, we are also engaging with our wide demographic by creating marketing that speaks to Gen X, Y, Z as well as the baby boomers. We have achieved this by developing marketing campaigns as diverse as animated characters for kids, to legendary sports figures such as Pete Rose and Joe Namath for the older male, and Brooke Burke-Charvet for moms. Further, in the third quarter we signed multi-platinum recording artist Demi Lovato, who speaks to millions of teens every day through her social media platforms, and recently retired New York Yankees closer Mariano Rivera to reach the younger male consumer. To broaden our reach with men around the globe, we recently announced the signing of the worlds most famous drummer, Ringo Starr, who we believe will have a positive impact on our mens business in 2015. We believe our success is an opportunity to further capitalize on our strength. We are continuing to invest in product, marketing and infrastructure to advance our brand and drive momentum around the globe. We are looking forward to the holiday season and the breaking of the Demi Lovato television campaign, and Spring 2015 when we will have several new key lines launching in both the lifestyle sport and performance running and walking categories. Based on feedback from our domestic and international accounts, we are confident the momentum will continue into next year.

Weinberg continued: “The continuous record revenue quarters in 2014 and the strong growth in all of our key business segments is evidence of the relevancy and demand for Skechers footwear worldwide. The more than 50 percent increase in our backlogs at the end of September and the strong sales during the first few weeks of October give us confidence that the momentum we are experiencing now will continue for the remainder of the year and into 2015. We are continuing our retail expansion and plan to open an additional 10 to 15 Company-owned Skechers stores before the end of the year, in addition to the 22 that opened in the third quarter and the five that have already opened this month. We also plan to open another 35 to 45 Skechers stores through our international distributor and franchise partners before the end of the year-which will bring us to the 1,000 store milestone. We are also improving our international efficiencies with the opening of a new distribution facility in Chile in the third quarter and the completion of phase one of the automation of our European Distribution Center in Belgium in the fourth quarter. With our relevant product and advertising, market share gain, and solid financial position, including, $440.8 million in cash, the Company is well positioned for continued growth. Though the fourth quarter is historically our smallest sales quarter for our international division, we remain comfortable with the analysts current consensus for both revenue and earnings. Given the strength of our backlogs for the first quarter of 2015, we anticipate top-line growth to be 15 to 20 percent. 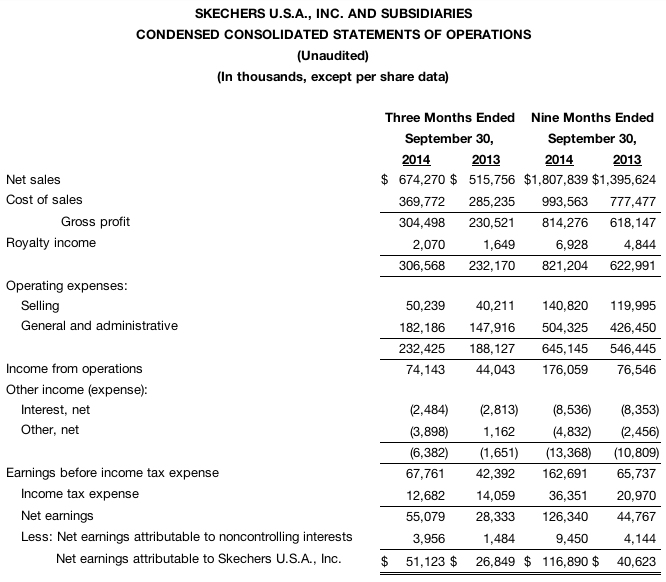