According to the Manufacturers Sales by Category 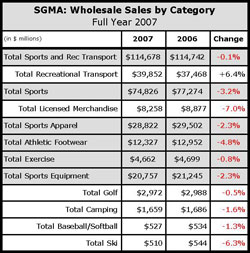 Report issued by the SGMA, total manufacturers' sales (in wholesale dollars) for the sporting goods and fitness industry in the U.S. grew at an annual rate of 3.3%. While down from rates in 2005 (+6.8%) and 2006 (+5.8%), the sporting goods industry has continued its streak of outperforming GDP for non-durable goods which was 2.2% in 2007, according to the U.S. Census Bureau.

Looking ahead, SGMA said that sales in the industry were running at a 6% or higher clip until Q4 spending tailed off significantly reflecting consumer concerns about the overall economy. Based on GDP forecasts and projections from the Federal government, SGMA said there “does 't appear there will be a quick or large upturn in GDP for 2008.” However, a potential bright spot could be the team sports business, which has generated “significant sales activity” in the first quarter of this year.

SGMA surmised that parents have made decisions to reduce spending in 'big ticket' areas to equip their families for team and league play at home. Martial arts and fitness equipment are also expected to continue to be strong as the result of continued promotions and the national momentum to get fit.