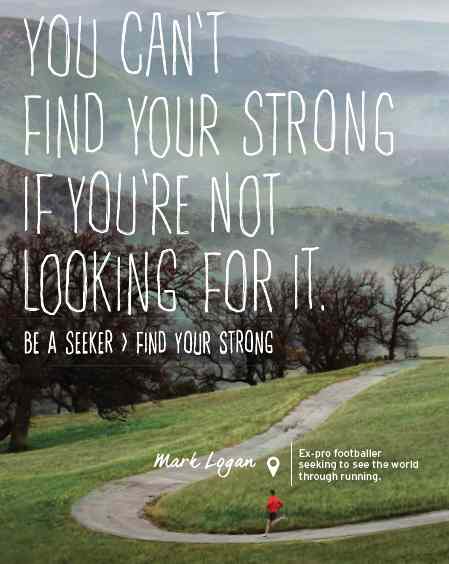 Saucony launched its largest marketing effort in history – a multi-media global brand campaign that reminds readers, viewers and listeners to seek out their potential through the transformative power of running.

“What do an astronomer, a chef and a former pro
soccer player have in common?” Saucony asks in a press release announcing he campaign. “They’re the seekers and runners featured
in Seeker, Saucony’s newest global brand campaign. Like runners
everywhere, they seek for truths on the roads and in the forests,
simultaneously losing and finding themselves in the passing of the
miles. And though each one of them is seeking something uniquely
personal along those pathways, it’s the discovery of their “strong” that
ultimately brings the Seeker campaign joyfully to life.”

The campaign features four short vignettes that profile a series of unique and ultimate Seekers who each use running to find their personal “strong.” For astronomer Michelle Collins, running around Hawaii’s Mauna Kea Observatory gives her the space to unlock the mysteries of outer space. For Chef Eduardo Garcia, sprinting through the Montana wilderness allows him to forage for his passion−the planet’s wildest ingredients. And former pro-footballer Mark Logan, in his quest to see the world, is running a life-changing road-trip up the Pacific Coast. The first story in the Seeker series will launch May 6 at saucony.com.

“A couple of years ago we launched a new campaign to reposition the brand around three really strong words−Find Your Strong−and we found that message has really resonated with runners everywhere,” said Mary O’Brien, vice president of global marketing for Saucony. “Now, we want to expand that conversation, to embrace and inspire a wider audience of runners to take up the journey. For every runner it’s a different pathway but ultimately the end truth is that running changes people for the better−physically, emotionally, joyfully.

Saucony, seeking a completely different perspective in the creation of the Seeker series, utilized drone footage, a first for the brand. “In photographing the Seeker concept we wanted to be true to the idea,” said O’Brien. “The drone’s unique perspective let us tell the “seeking” story with more clarity while allowing us to actually witness the characters’ process in finding their strong.”

The national print campaign launches in the May issue of vertical running and triathlete magazines and includes Runner’s World; Running Times; Competitor; and Triathlete.

In celebration of its home-town marathon, Saucony is spreading the Seeker message through an out-of-home marketing blitz that includes bus-station wraps in Boston’s Back Bay; advertising in the official Boston Marathon program guide; and at the Saucony booth at the John Hancock Sports & Fitness Expo.

The Seeker campaign is planned to run throughout 2015, with several new executions for the fall. Saucony will continue to integrate the theme into upcoming marketing initiatives throughout the year.

Deckers Outdoor’s CFO To Step Down