Salomon president Jean-Luc Diard said during his presentation last week that his division, which includes Mavic in Cycling, Arcteryx in Outdoor, Bonfire in Snowboard and Cliché as their European Skateboard line, saw sales “pretty much” double since 1997.

However, growth is challenged by currency exchange issues with the U.S. and Japan. Citing the “significant decline” in the Japanese market, Diard said Salomon will sell just 500,000 to 600,000 pairs of skis this year compared to over 2.8 million pairs sold in 1997. Diard said the company has seen a 20%+ swing in currency. Fifty percent of Salomon sales are done in the U.S. Dollar and the Japanese Yen.

Diard did claim that Salomon is still number one in winter sports. He showed slides that indicate that the Salomon business is roughly 50/50 winter/summer after being 90/10 in 97 and 100% winter 10 years ago.

The In-line Skate category is also challenging. Diard said that the market will be just four million units this year versus 14 million units when they got in the business. He said that the key price-point here is at $99 and it is tough to make money at that range.

The Salomon brand will pick up some benefits from the ArcTeryx relationship for the first time, adding high-end Gore-tex jackets in the line that were co-developed with their new sister company. Diard said that Salomon will dropping price points in their soft shell category.

A key footwear technology, Ground Control System, was cross-developed with adidas, with adidas getting all categories except Adventure Trail Racing. The shoes feature a new suspension system.

Diard said that production is now 15% in company-owned facilities and 85% in contract manufacturing. He said that 56% of the contract work is done in Europe and 44% is in Asia.

The net-net is that Salomon sees flat sales and earnings in 2003 compared to last year, with strong growth in soft goods and cycling and tight expense control offset by negative currency effects and tough in-line skate markets. 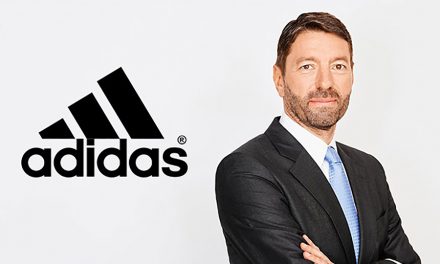