What’s encouraging about the survey results is that more than 70 percent of the adults surveyed, whose child competed in a sport, felt that their child would remain physically active into adulthood. What’s also great to see is that nearly 40 percent of the adults whose child competed in sports actually played sports with their child in the last 12 months. 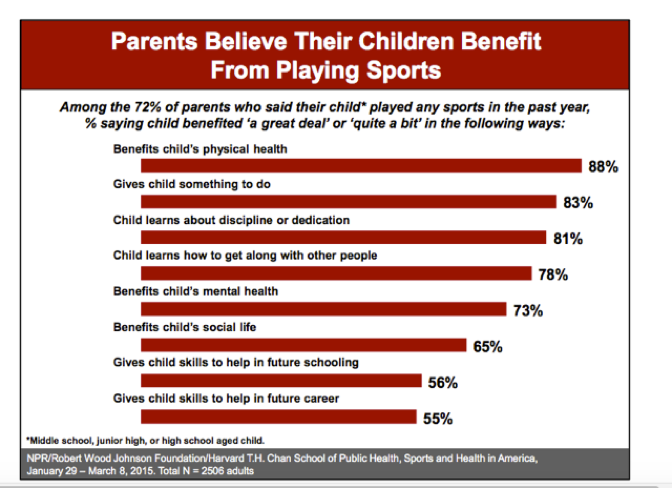 “Sports are a critical component of a healthy community. They help children and adults maintain a healthy weight, teach acceptance and teamwork, and expand opportunity for children living in poverty,” said Risa Lavizzo-Mourey, MD, President and CEO, Robert Wood Johnson Foundation. “This poll indicates that we must continue to encourage children to play sports, but just as important, we must find ways to keep adults engaged in sports in order to maintain health and well-being.”

The vast majority of parents in the survey feel their children benefit from playing sports because:

The results of that same study revealed that while more than three-quarters of adults report having played sports as children, only 26 percent are still playing into their late 20s. Another finding is that nearly 70 percent of adults who were active as children are no longer physically active at age 30.

Of those adults who do play sports, nearly 60 percent engage because it reduces the stress in their life and more than half say it improves their mental health or physical fitness.

“When adults play sports, it’s about competition, personal satisfaction and health. More than one in five adults who play sports does so for health-related reasons, and it’s a priority in their lives,” said Robert J. Blendon, Richard L. Menschel Professor of Health Policy and Political Analysis at Harvard T.H. Chan School of Public Health.

Researchers wondered, why are adults  men and women  putting a halt to their athletic lives at such an early stage in life?

While half of the adults surveyed say that a health-related matter (old age or an injury) is why they don’t play sports, the other half say that a lack of time, opportunity and money is why they are no longer active.

“Many people across America are frustrated about the lack of knowledge of local sports clubs, camps and clinics so that they can get involved and start being active,” said Mike May, Director of Communications, PHIT America. “Our GetFitHere database cuts to the chase and provides any exercise enthusiast with the information he or she needs.”

Founded in January 2013, PHIT America is a nonprofit campaign focused on overcoming the ramifications of the ‘Inactivity Pandemic’ through three strategic approaches  education, supporting school-based activity programs and advocating  with the goal of getting Americans, especially youth, more active, fit and healthy.