Reebok Sees Earnings, Profits Rise, But CEO Gets No Raise 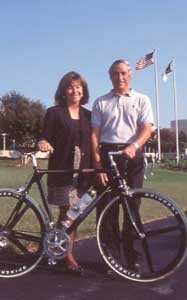 Although Reebok International Ltd. saw its profits rise smartly in 2002, the salary and bonus of chairman and chief executive Paul Fireman remained roughly the same at about $3.08 million, according to a proxy filed Monday to the Securities and Exchange Commission.


However, the proxy also showed that Fireman and his wife owned nearly a quarter of the company’s shares of common stock, worth about $450 million — quadruple what the shares were worth in December 1999.


Performance that results in a higher stock price means that Fireman can benefit even if his salary and bonus stay flat, analysts said.


In 2002, the Canton-based maker of athletic footwear and apparel distributed about 1.6 million stock options to employees, but none to either Fireman or president Jay Margolis, according to the proxy.


After the compensation committee of Reebok’s board reviewed the pay packages for other chief executives at similar companies, Fireman was granted 400,000 in stock options last month. Because they were granted in 2003, the 2002 proxy did not put a value on them.


Margolis, meanwhile, saw his salary and bonus rise to $2.7 million in 2002, up from about $1.1 million in 2001, after he was promoted to his newly created post in late 2001, the proxy said. The company declined to comment on Fireman’s compensation beyond what was published in the proxy.


In late 1999, after seeing Reebok lag further behind rival Nike Inc. and the stock trading at about $8, Fireman assumed more management responsibilities and vowed a turnaround.


Thanks partly to the popularity of Reebok’s classic lines and merchandise licenses with the National Basketball Association and the National Football League, Reebok has achieved its turnaround, analysts said.


“They had a very good year in 2002,” added John Zolidis, an analyst with Buckingham Research Group.


According to the proxy, Fireman owns 13.5 percent of Reebok’s common stock shares and his wife, Phyllis, owns 10.7 percent.