Mammut Sports Group Inc., of Shelburne, Vt. and its Canadian distributor reissued a more detailed recall of the Snowpulse Avalanche Airbags, citing a leak in the airbag's cartridge that can result in the airbag not deploying, posing a risk of death and injury in the event of an avalanche.


While no injuries have been reported, Mammut said the recall involves about 2,600 it sold in the United States and 1,200 sold by Mountain Sports Distribution, of Golden, British Columbia in Canada. The units were sold by specialty outdoor and motorsports stores from September 2008 through April 2012 for between $900 and $1,200 each.
The air bags were manufactured by Snowpulse SA, of Martigny, Switzerland, which Mammut acquired last year. Mammut initiated a recall of the cartridges used in the Inflation System 1.0 used in air bags manufactured prior to the 2011-12 season in February after discovering weaknesses in Snowpulses quality controls. 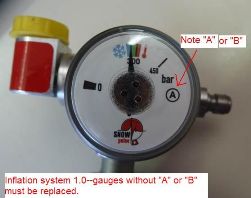 This recall involves airbags using the same inflation-system 1.0 air cartridges from the 2008 to 2010 model year. The airbags are used for skiing, snowmobiling and mountain climbing to help keep the user above the surface if an avalanche occurs. The packs are between 15 and 45 liters and have the “Snowpulse” logo printed on them. The metal cartridge is inside the pack and unscrews from the airbag. Cartridges using inflation system 1.0 gauges can be identified by the pin inside the threaded fitting on the side of the cartridge. If this gauge does not have an “A” or a “B” on the dial then it is included in the recall.