Quiksilver Inc. filed a Chapter 11 bankruptcy petition Tuesday that calls for a $175 million restructuring that would result in Oaktree Capital – the largest shareholder of Billabong International – emerging as Quiksilver's new owner.

The Chapter 11 filing, which is supported by 73 percent of the company’s senior most class of debt, will facilitate Quiksilver’s financial and operational restructuring, which is designed to restore the company to long-term financial health. Unsecured creditors, however, stand to lose tens of millions of dollars. Quiksilver Inc.'s brand include Quiksilver, Roxy and DC Shoes. 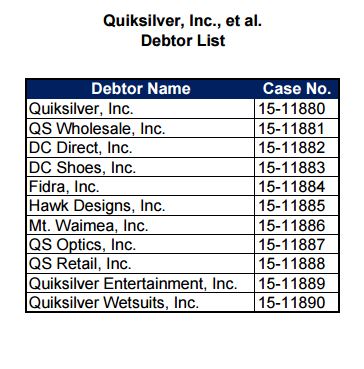 The company’s European and Asia-Pacific businesses and operations remain strong and are not part of this filing. Additionally, holders of the company’s Eurobonds sufficient to waive any technical default arising from the filling have agreed to allow the company to reorganize its U.S. operations in chapter 11.

Following the filing, Quiksilver will continue to operate in the ordinary course of business as a “debtor-in-possession” under the jurisdiction of the Bankruptcy Court. Contemporaneously with the filing, the company has requested that the Bankruptcy Court approve $175 million in new debtor-in-possession (DIP) financing with affiliates of Oaktree Capital Management, L.P.  and Bank of America, N.A. Oaktree Capital is the largest shareholder in Billabong International.

The company anticipates that such financing, in conjunction with other existing sources of liquidity, will be more than sufficient to fund its ongoing operations in the U.S. and abroad. The company also requested various forms of “first day” relief from the Bankruptcy Court to ease the U.S. subsidiaries’ transition into Chapter 11 and protect its stakeholders and customers.

Oaktree to provide funding
The Plan Sponsor Agreement (PSA) with Oaktree provides a comprehensive blueprint for the company’s emergence from Chapter 11 as a going concern pursuant to a plan of reorganization, under which Oaktree has agreed to provide all necessary funding for the Chapter 11 process and will convert its substantial debt holdings into a majority of the stock in the reorganized company on exit. The PSA contains certain conditions, including confirmation of a plan of reorganization by the Bankruptcy Court.

Oaktree is a leader among global investment managers specializing in alternative investments, with over $100 billion in assets under management. The firm, which emphasizes a value-oriented and risk controlled approach to investments, has a proven track record of success assisting companies through the restructuring process and in the action sports industry.

“After careful consideration, we have taken this difficult but necessary step to secure a bright future for Quiksilver,” said Pierre Agnes, Quiksilver CEO. “With the protections afforded by the Bankruptcy Code and the financing provided by Oaktree, we will not only be able to satisfy our ongoing obligations to customers, vendors and employees, but we will also have the flexibility needed to complete the turnaround of our U.S. operations and re-establish Quiksilver as the leader in the action sports industry. Our fresh capital structure, with a very low level of debt for our industry, will enable us to invest in and reinvigorate our brands and products. We are confident we will emerge a stronger business, better positioned to grow and prosper into the future.”

“Oaktree’s financial strength and expertise, deep experience working with companies in situations similar to ours, and successful history operating in our industry make them an exceptional partner for us going forward. We value our wholesale customers as well as our vendors and suppliers and appreciate their support through this process. In addition, we thank our passionate and dedicated employees and athletes who remain our greatest assets. Quiksilver is, and as a result of this process will continue to be, an iconic leader in the action sports market.”

In connection with the filing, the company intends to continue its existing store closing program to rationalize its store base in the Americas. As is customary, it is anticipated that the Bankruptcy Court will consider the company’s request for “first day” relief promptly. The requested relief includes requests for the authority to make wage and salary payments, continue various benefits for employees, and honor certain customer programs, such as gift cards and returns on merchandise purchased prior to the bankruptcy filing.