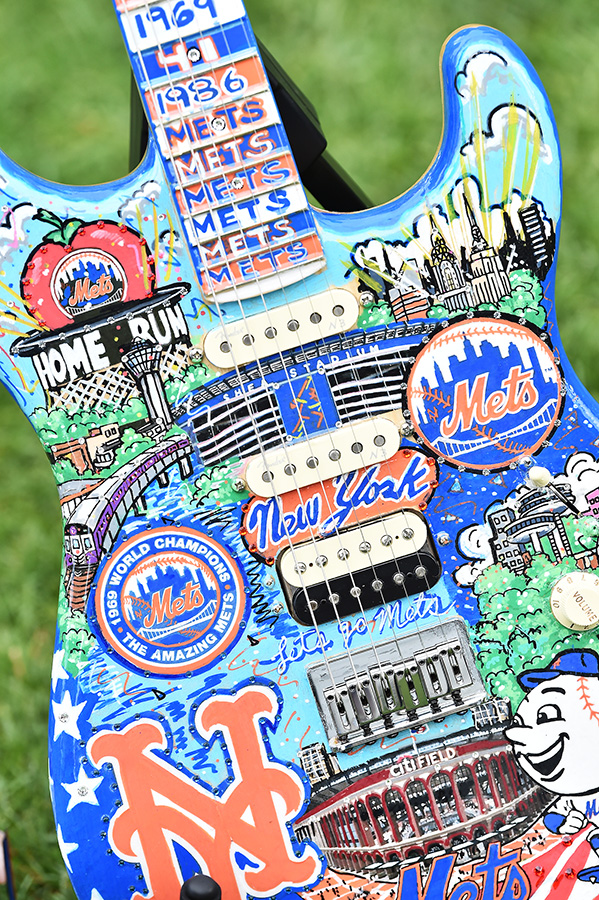 Fender Musical Instruments Corp. (FMIC) and Louisville Slugger today announced their collaboration to celebrate the 2019 Major League Baseball® All-Star Game hosted in Cleveland, Ohio. Paying homage to the home of the Rock & Roll Hall of Fame, All-Star Week (July 5–9) is embracing two beloved pastimes, making for an ideal partnership between two manufacturers that are world leaders in their respective areas: Louisville Slugger in baseball bats and Fender in musical instruments.

To celebrate the rock ’n’ roll history of Cleveland, Fender and Louisville Slugger partnered to create a public exhibit featuring 31 pairs of artist-painted Fender Stratocasters and Louisville Slugger baseball bats, one for each MLB team and one for the Baseball Hall of Fame. These bats and guitars will be displayed from 11 a.m. to 7 p.m. July 6–9 at Cleveland Public Square’s Midsummer Village in conjunction with Mitchell & Ness®. The exhibit is free and open to the public.

The pairs will be auctioned July 5–29 on MLB Auctions. Proceeds will benefit initiatives by MLB Charities and be used to purchase instruments and learning resources for select music programs.

Leading artists from every MLB city were commissioned by the partnership to design and hand-paint the products, using themes and inspiration drawn from the historical, musical and baseball heritage of the 30 Major League teams and the Hall of Fame. The works and designs include odes to Seattle’s alternative rock history, St. Louis’ own Chuck Berry and his iconic stage presence, and Detroit’s Motown history in the form of 45 RPM records. The pairs also feature the scenery of the ocean in Tampa Bay, the lakes in Minnesota and the Rocky Mountains in Denver; Fenway Park’s legendary Green Monster; 3D Pop Art colorfully illustrating the Mets history; Yankees art created by shortstop Didi Gregorius; and a portrayal of Cleveland’s rock ’n’ roll roots.

“Almost everyone has been influenced by either sports or music in their lives,” said Evan Jones, Fender’s Chief Marketing Officer. “I’m excited to be a part of a collaboration that unifies these two passions and brings to life these artist creations in one of America’s most beloved places, the All-Star Game.”

To further celebrate the occasion and the partnership, Louisville Slugger and Fender have also designed and created a limited-edition Supra™ Sunburst bat, painted at Fender’s Corona, Calif.-based factory. Music and baseball fans will be drawn to these co-designed bats, as they feature both the Fender and Louisville Slugger logos, as well as Fender’s iconic 3-tone sunburst finish, which is seen on guitars played by some of the greatest musicians of all time. As a final step to these limited-edition bats, Louisville Slugger added its finishing touches of decals and clear-coat spray.

Fifty sequentially numbered limited-edition Supra Sunburst bats – which will be seen in Cleveland throughout All-Star Week – will be sold on Slugger.com. Every player in the 2019 MLB All-Star Game, Home Run Derby and Futures Game will also receive one of these bats.

“When the opportunity came to collaborate with Louisville Slugger for this year’s All-Star Game, we knew that we wanted to use ash wood from Cooperstown, N.Y., home of the Baseball Hall of Fame,” said Mike Born, Fender’s Director of Wood Technology. “This is the same wood that we used for the Grammy Museum’s guitar, called “Take Me Out To The Ball Game,” which highlighted the cultural connection between music and America’s favorite pastime, baseball.”

“Louisville Slugger looks for a unique way to honor the All-Star Game host city every year,” said Louisville Slugger Brand Manager Joey Nowak. “With Cleveland being the home of rock ’n’ roll, we sought a partner to help us make the music connection. Since both Fender and Louisville Slugger have many parallels, such as the use of ash and maple and their craftsmanship, they have enormous legacies within their industries as well as partnerships with legendary performers who’ve delighted hundreds of millions, if not billions, of fans.”

About Fender Musical Instruments Corporation: Since 1946, Fender has revolutionized music and culture as one of the world’s leading musical instrument manufacturers, marketers and distributors. Fender Musical Instruments Corporation (FMIC), whose portfolio of brands includes Fender®, Squier®, Gretsch® guitars, Jackson®, EVH® and Charvel®, follows a player-centric approach to crafting the highest-quality instruments and musical solutions across genres. FMIC is dedicated to unlocking the power of music through electric and acoustic guitars, amplifiers, pro audio, accessories and digital products that inspire and enable musical expression at every stage, from beginners to history-making legends.

About Louisville Slugger: Founded in 1884, Louisville Slugger is the Official Bat and Equipment Bag of Major League Baseball®. This iconic baseball brand is part of Chicago-based Wilson Sporting Goods Co., the largest baseball and softball equipment provider in the world today. In the sports of baseball and softball, Wilson manufactures high-performance gloves, bats, uniforms, apparel, protective gear, accessories, and player-development equipment through its Wilson®, DeMarini®, Louisville Slugger®, Evoshield and ATEC brands. The company uses player insights to develop products that push equipment innovation into new territories and empower athletes at every level to perform at their best. Wilson is a subsidiary of Amer Sports Corporation.